A man has shared a bizarre rescue story online this week, after losing his way in the mountains in Switzerland.

The man posted a picture of his furry rescuer on Reddit, after he found himself totally lost in the mountains outside Gimmelwald, with no one around and no working ski lifts to get him home.

It was when he found out that the only official trail back to civilisation was closed, he claims that the furry little rescuer turned up and guided him all the way down the mountain and to his hotel, frequently stopping and waiting for him to catch up. 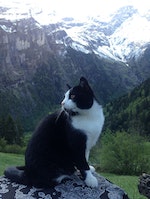 “Gimmelwald is a tiny, tiny stunningly beautiful village. I actually got ‘lost’ in the surrounding mountains” says the man on Reddit.

“It was the end of ski season when I got to Lauterbrunnen, so the lifts weren’t working”

“As soon as I got up she started guiding me along some path…. she was walking and kept looking at me to follow, led me straight to the path that would take me back down to the valley.”

After the post went up on the website, others have recognised the cat and shared their own stories of finding her in the mountains.

It seems that Gimmelwald mountains have their very own furry rescue patrol!

Welsh Village Under Threat From “Psychotic Sheep” High On Cannabis

Animals article laughter
We use cookies on our website to give you the most relevant experience by remembering your preferences and repeat visits. By clicking “Accept All”, you consent to the use of ALL the cookies. However, you may visit "Cookie Settings" to provide a controlled consent.
Cookie SettingsAccept All
Manage consent