There are a lot of stereotypes that get bounded around about Australia. They’re always having barbeques and drinking beer for example, they do a hell of a lot of surfing, and they’ve got crazy animals coming out of every corner.

While you do hear a lot about that widespread wildlife though, it tends to be more about the cute, bouncy kangaroos, the cuddly koalas or the venomous spiders and snakes than anything else.

Sometimes though, the animals that are meant to be adorable actually turn out to be the most ferocious, and this is down to one simple fact the Australians don’t want you to know – they run special kangaroo gyms they hide from the world.

Or that’s our guess anyway. How else would this attractive chap have got so stacked? 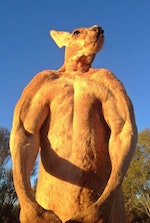 The animal above is called Roger, which we’re guessing is not a coincidental match with the name of the boxing ‘roo Roger from the Tekken series. If it is, it’s certainly a fitting one, although as impressive as the video game Roger was, we still reckon this new kid could knock his head off.

At two-metres tall and weighing in at 89kg, it’s safe to say that our Rog could give Floyd Mayweather Jr. a run for his money – I mean just scroll back up for a second and have a look at those arms again. There’s enough muscle on those things to scare Sepp Blatter into admitting he’s corrupt.

Oh, and we should probably mention that one of Rog’s hobbies in his home at The Kangaroo Sanctuary in Alice Springs is crushing giant metal buckets with his bare hands… because, well, he’s just that badass. 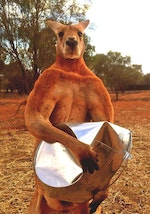 Fear not though, because Tahnee Barns of the Kangaroo Sanctuary says the beast of an animal is “still growing and will get bigger” – wait, what?! Remind us to never stop by at Alice Springs.

Roger isn’t the only ripped up ‘roo to make the news lately though. The guy in the video below is called “Big Buck”, and he made an appearance in a small town in Brisbane last May, scaring locals off the golf course, flexing his way into a few free pretzels and seducing their woman with his giant arms.

Good luck sleeping tonight world. The bodybuilding kangaroos are here, and they’re coming to get you.

Watch: Hilarious Reactions Of Wild Animals Looking Into A Mirror For The First Time

10 Seriously Strange Sports From Around the World That You Need To See To Believe...

Have you ever tried kickflipping a barstool? Or fighting a can of Kung Fu soup?

10 Seriously Strange Sports From Around the World That You Need To See To Believe...

This Heart-Stopping Wingsuit Video From Uli Emanuele Is Absolutely Incredible

He flies into a two metre wide gap in some rocks...and survives.

This Heart-Stopping Wingsuit Video From Uli Emanuele Is Absolutely Incredible

Style, speed and sideways soaring in the mountains of British Columbia...

article awe disgust fear laughter surprise
We use cookies on our website to give you the most relevant experience by remembering your preferences and repeat visits. By clicking “Accept All”, you consent to the use of ALL the cookies. However, you may visit "Cookie Settings" to provide a controlled consent.
Cookie SettingsAccept All
Manage consent