What do all 16 to 30 year old males have in common? Not an awful lot, but if you’ve ever attempted to buy a birthday or Christmas present for one of them, you’ll know that one thing they do all share is the fact that they’re pretty difficult to please. They just aren’t particularly interested in very much, they’re choosy about what they do like, and they will have already gone out and bought most of what they actually do need or want anyway. And it doesn’t get much easier when they get older either.

One public figure who has succeeded in capturing the imagination of a good chunk of this disparate and hard-to-please bunch is survival expert and adventurer Bear Grylls. Fresh out of the SAS and looking liking a boyish, twinkle-eyed action man made flesh, Bear was catapulted to fame in 2006 with hit show for Channel 4, Born Survivor (also broadcast on the Discovery Channel as Man vs. Wild) and his popularity was spurred on from the success of Running Wild and The Island. He’s never been far from our screens since, and has expanded on his TV success via numerous books, DVDs, clothing and survival accessories.

So you should be able to find plenty to chose from if you’re looking for something for that picky young chap in your life. Here are just seven of the best to get you started.

Everything you need to know about the great man himself in his own words. Covers his early years growing up on the Isle of Wight as the son of a prominent MP with a penchant for risky climbing and sailing exploits, plus the in-depth story of all the hair-raising antics Bear has become so famous for. A sure fire hit. For a range of other inspiring Bear Grylls books, check them out here – The 5 best Bear Grylls books

The show which really kicked things off for Bear’s media career. Every episode of the first two series of the hit show, featuring all the rugged action we’ve come to know and love. Highlight’s include a gruelling trek across the Sahara, plus a spectacular skydive over Mount Everest which is particularly impressive when you consider he was nearly paralysed during a similar stunt just a few years before. Complete Season Three and Four and Complete Season Five and Six also available.

Part of Bear’s excellent range of survival tools, knives and adventure accessories produced in collaboration with top American outdoor brand Gerber. A great way of getting a fire on the go when you’re exploring the great outdoors. Less caveman-like than banging a couple of rocks together, not susceptible to damp, and ultra-compact.

Essential kit for outdoor adventures in all weathers. These light-weight strides will keep your legs cool and protect them from harmful UV rays, repel rain, dry quickly, and have clever stretch panels for complete freedom of movement. Also look great, so work as casual day wear for the summer months. Want to know how to dress like the man himself? There are helpful tips to cater to your specific needs  – Dress like Bear Grylls – Gear and Clothing 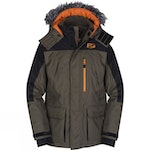 Push the boat out with this warm and rugged utility jacket Bear has designed in collaboration with Craghoppers. Stylish design in adventure green and black with orange trim. Features super-efficient insulation and a fur-trimmed hood to keep in body heat, and eight useful pockets for your OS map and other essentials. The business.

This aptly-named accessory from Bear and American adventure experts Gerber has no less than 12 stainless steel weather-proof components including two knives, a saw, pliers, a can-opener, plus much more. Indispensable for any adventure situation, and handy to have around the home for small DIY jobs too. If you are looking for something a bit more specific, check out some of Bear’s other survival knives.

23 Ridiculous Facts That Prove Bear Grylls Is The Ultimate Adventurer

article bear grylls
We use cookies on our website to give you the most relevant experience by remembering your preferences and repeat visits. By clicking “Accept All”, you consent to the use of ALL the cookies. However, you may visit "Cookie Settings" to provide a controlled consent.
Cookie SettingsAccept All
Manage consent