Seeing the new Olympic stadium and surrounding venues is one of the most exciting parts of the build up to each Olympic Games.

Every year the stadium gets bigger, the tracks get more impressive and the Olympic villages spread further and further across the city. But what happens at the end of each year, when the Olympics packs up and leaves?

This year’s games in Rio are expected to come to a cost of over $10 billion and with each Games the price tag only gets bigger.

Here are some Olympic venues that have been forgotten in the year’s after their glorious summer. From Athens to Beijing, with so many venues abandoned and so much money spent on each games, there must be a better way…

12) Barricades Outside The Stadium 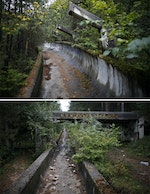 article Olympics 2016
We use cookies on our website to give you the most relevant experience by remembering your preferences and repeat visits. By clicking “Accept All”, you consent to the use of ALL the cookies. However, you may visit "Cookie Settings" to provide a controlled consent.
Cookie SettingsAccept All
Manage consent