“Take the path that goes right in a hairpin…follow it uphill through the forest…near the top it takes a sharp turn to the left… the path eventually leads to a paved road.”

We’re somewhere in the middle of the French Pyrenees, where for the last three and a half hours we’ve been walking in thick heat through a deep mountain forest that’s teeming with life. Bees, butterflies and birds in shades we’ve never seen before are all around. We’re not lost, at least we don’t think we are but as we haven’t had a sniff of phone signal since the start of our hike, it’s hard to say for sure.

Instead we’re following a photocopied map and some typed out instructions, which up until now have been enjoyably idiosyncratic. My favourite being: “Follow [the path] for 800m until you find three unusual fir trees, planted in a triangle.”

To be fair the route has been super-clear and easy to navigate, we haven’t needed Google maps at all, but it’s amazing how much you rely upon it even as a back-up security blanket. I say this as someone who grew up pre-smart phones, and honed a fairly decent ability to read a map by navigating my Dad around London streets with a battered old A to Z.

The mild route anxiety only came on at the end of the first day, most likely because we were tired and thirsty and our water was running low. While my husband and I debated how long “eventually” was meant to be and whether we’d somehow missed the “paved road”, our kids, aged almost 4 and 6, began to tune in for the first time all day to how far they’d been walking. And the complaints began.

“Follow [the path] for 800m until you find three unusual fir trees, planted in a triangle…”

The reason they hadn’t noticed until now was that our group also included a donkey called Lazou, and leading her along had left them giddy to the point of distraction. They’d pretty much skipped the entire first mile singing her name as they went. And when, after our picnic lunch of amazing local rock-hard bread and cheese in a pretty forest clearing, we allowed them to take turns riding on her back, they rode her like proud princes from a fairytale.

Soon enough we did pop out on a paved road and moments later arrived at Refuge Haugarou, our base for the night. As per the printed instructions, I took Lazou’s saddle off, tipped a bucket of food at her feet and let her roam in the lush vegetation surrounding the refuge. We bought the kids a Coca-Cola each, a rare treat that we quickly regretted as they raced around the grounds reenergised to the point of crazy, while we watched the sun slip down the forest valley. Day one: done. When we’d told friends we planned to do a couple of days of mountain hiking with the kids during our summer holiday, the common response had been raised eyebrows. Were we not worried they’d hate it and us too for that matter? It was a reasonable concern, not because the children dislike walking, as they’re usually fine as long as the snacks and stories are plentiful, but given the choice, they’d never choose do it. Especially not uphill in a heatwave on a summer holiday that until this point had been spent at the beach or in the kind of awesome slide-tastic swimming pool you only seem to get at French campsites.

But then I read about La Balaguere’s donkey treks and realised this could be a good way to keep them happy on the hike. Especially the younger one who is so obsessed with animals he’d rather watch wildlife documentaries than kids’ cartoons. Unless the cartoons involve animals, that is, then of course he’d rather watch those.

The day started when we met Lazou and her owner Marie at a farm in Bernicaze, not far from Arras en Lavedan a sleepy French village, which itself was not far from the pilgrims’ favourite Lourdes. Right away it was clear this was no mangy flea-ridden donkey of the usual seaside stereotypes.

Her coat was shiny, her eyes bright and she was clearly well loved and looked after by Marie who proudly told us she was a pure-bred Pyrenees donkey. She made me promise to put Vaseline around her belly at the end and start of each day to stop her getting saddle sores and to make sure the fly guards around her eyes stayed in place. And then off we went.

We were worried she might need coaxing especially on the steeper sections but she never did. Her peaceful presence in the high mountain setting was reassuring, and even my husband, who’d been sceptical about whether she’d help or hinder the hike, was soon singing her praises with the rest of us.

On our second and final day we awoke to the sound of cowbells, you can do self-guided hikes for up to six days here but given the ages of our kids we felt two was enough. Out of our bunk-room window we watched the herd clatter down a steep rock slope and then head off into the seemingly endless forested valley. After breakfast we saddled up Lazou, who carried everything we needed for the day, and set off up the mountain. La Balaguere would later organise taking our main bags back to our car at the start of the hike, which was great as it meant we didn’t have to carry anything.

The first hour of the climb through the forest was the steepest of the whole trip and perhaps inevitably the boys started fighting over whose turn it was to ride Lazou. The day before the eldest had been mostly happy to let the youngest ride but today he wanted his fair share and insisted on me using the stopwatch on my phone to time each go.

But when we emerged from the forest the view made the struggle worth it. The craggy Pic de Bazes towered to our right, while the Pyrenees-Atlantiques range of mountains stretched off to the horizon in every other direction. We could also see our path winding around a mountain to our left and it looked wide and fairly flat which raised the kids’ spirits no end. As did the many blackberry bushes we then found.

The next stretch was the most idyllic of the whole adventure and it’s the part I’ll remember the most. Walking on soft spongy grass, we passed river sources and springs, gazed at far off peaks and spotted eagles above. Aside from the trance-like clanging of more cowbells on cattle and goat herds, we didn’t hear a sound or see a soul. It was pure family time in a remote mountain wilderness on a blue-skied blazing-hot summer day. The kids took turns to lead Lazou while the other rode on her back, and we had the kind of inane but often quite deep chats you can only have while walking to the side of your children. At others times we strode on in perfect silence.

“Aside from the trance-like clanging of more cowbells on cattle and goat herds, we didn’t hear a sound or see a soul…”

We picnicked by a lake, while Lazou munched on thistles which seemed to be her favourite snack, their spikes no obvious deterrent. Aside from the steep start, day two was a lot shorter and easier. After lunch we made our way down through the giant glacial scree of the Cap d’Aout and to our end point at the Col du Souloir.

When it came to say goodbye to Lazou, the youngest was fighting back the tears. Six months on he still asks unprompted: “What’s Lazou doing today?” There’s no way they would have walked that far in such (for the most part) high spirits without her there. I think it was really good for them to experience a relatively tough walk in a remote setting and come out the other side smiling. And also pretty great for us to get to enjoy some awesome long mountain walks with a minimum of moaning, and the added freedom (and feeling of minor peril) of having no mobile phone reception.

We drove down through France having taken a Brittany Ferry from Portsmouth to Caen. It would take around eight hours from Caen to Arras en Lavedan. Prices for 2017 start from £158 return visit Brittany Ferries 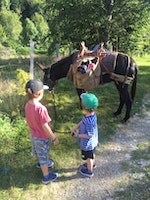 inspiration longform
We use cookies on our website to give you the most relevant experience by remembering your preferences and repeat visits. By clicking “Accept All”, you consent to the use of ALL the cookies. However, you may visit "Cookie Settings" to provide a controlled consent.
Cookie SettingsAccept All
Manage consent