How much money, do we think, is too much money to spend on a kids’ mountain bike? Can you even put a price on such a thing? What about $7,350? Or £5,902 in English money? Is that a price you’d be willing to pay to watch little Timmy, or Billy, or Fi-Fi, or Tabatha rip around on a carbon-fiber downhill stallion? That’s a question only you can only answer.

Made for young riders with big talent, MeekBoyz are working in the knowledge that they probably won’t sell millions of kid bikes with such a high price point but that when they do… kerching / *cash register sound effect* etc etc. That being said, they’ve clearly got their eyes set on growing as much as possible. Last year, MeekBoyz made a couple dozen bikes. This year, they look primed and ready to double that number with the Meek lot currently building more than one bike a week.

“How much money, do we think, is too much money to spend on a kids’ mountain bike?”

So, in case you’re not up to speed with them already, here’s a bit more information on the MeekBoyz bikes and what they bring to the table (apart from a gaping great big hole in your bank account).

Talking tech for a second, the MeekBoyz’ frames are all made of UD stress carbon and are reinforced at important stress points. Channeling a bit of the old Henry T. Ford, the bikes come in any colour you want so long as its black (matte black). Like pretty much everything else on the bikes, the wheel sets are carbon too (with titanium spokes).

In terms of suspension, the ‘Beast’ offers an impressive 180mm of travel. This is significantly more than what’s offered by other child-specific bikes on the market. Whether this is enough to convince you to fork out the big bucks and make you ‘parent of the year’ in your kids’ eyes is another matter entirely. 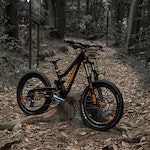 For more information on MeekBoyz, have a look at their website.

information surprise
We use cookies on our website to give you the most relevant experience by remembering your preferences and repeat visits. By clicking “Accept All”, you consent to the use of ALL the cookies. However, you may visit "Cookie Settings" to provide a controlled consent.
Cookie SettingsAccept All
Manage consent