We’ve teamed up with Nikon, who’ve just released the brand new KeyMission 360 Degree action camera, to create a series which focusses on the missions that drive those at the cutting edge of action sports. Here, Mpora’s bikes editor Stuart Kenny interviews the founders of Freeride Madeira about their mission to turn their home – previously best-known as holiday hotspot for retirees – into a world-class mountain biking destination.

“I never thought that something could actually happen on this scale,” admits John Fernandez, one of the founding members of Freeride Madeira.

“Mountain biking has been my favourite sport since I was 13 years old and guys like Brendan Fairclough and Steve Peat were my idols. Suddenly they’re here and I’m showing them the trails I’ve been riding for years and organising film shoots with them. It’s incredible.”

“Madeira has been transformed from a retirement home for pensioners into a Mecca for mountain biking.”

John founded Freeride Madeira, a company specialising in the development of mountain biking on the eponymous Portuguese island, back in 2009, with friends Roberto and Nulo. It’s always been a labour of love, born from a passion for mountain biking and for pushing the boundaries of the sport.

In the years since it was founded, the guys’ company has come a long way and they’re beginning to accomplish their mission of putting Madeira firmly on the mountain biking map – a mission that Nikon is documenting with their new action camera range.

The stunning Portuguese island has become renowned as an off-season paradise where the best in the business go to play in winter, helped by a favourable climate which keeps Madeira warm year-round. The average temperature in January is a welcoming 14-20 degrees, and the micro-climates across the mountains mean that if it’s raining in one spot, you’ll normally be able to find sunshine in another.

As word has spread of the endlessly diverse riding, mountain bikers from across Europe have been flocking to find out what the fuss is all about and take in landscapes that wouldn’t look out of place in Jurassic Park. They tend to come away with rather good reviews.

“Brendan Fairclough came over and mentioned to me that he thought it was probably the best mountain biking destination in the world,” John tells me. “He’s doing a big movie next year in which Madeira will have a segment. It’s incredible.

“I’ve been to the Alps and to Whistler and around Canada and I can see why Brendan [Fairclough] said Madeira could be the best. Here you can go almost six days of riding over 40 or 50km each day without repeating a single trail, and each day feels like you’re in a completely different place on Earth. It’s completely unique in terms of vegetation, terrain and scenery.

“It’s so different and so beautiful. The different micro-climates around the island create lots of different kind of landscapes perfect for riding – we’ve been building flowy descents for beginners and then there are ancient footpaths that are pretty steep and technical and rocky trails and fast downhill tracks as well. 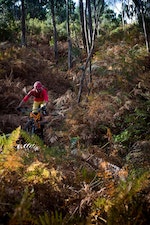 Sam Flanagan and Mark Scott from the Enduro World Series (EWS) were the first two pros to come over, and they were followed by the likes of Joe Barnes, Josh Bryceland and indeed Fairclough.

It’s no coincidence that the trails tend to leave such an impression of course. As the footage shot on the Nikon KeyMission cameras shows, they’re well-built and well-maintained. In the six years since they got started, Freeride Madeira has grown with the mountain biking reputation of the island – growth that will no doubt be given a boost by Nikon’s involvement in their mission. 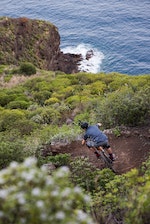 The company started with a crew of three who just wanted to make a living doing what they loved most; riding their mountain bikes.

Now, John, Roberto and Nulo are so busy they rarely get the chance to ride together. But the flipside is that they’ve created one of the most exciting up-and-coming trail networks on the planet.

John explains the origins of their self-appointed mission and how they started out: “We’d all been riding Madeira for over 10 years; riding, organising races and trail building, and we realised after travelling that it really had a lot of potential as a mountain biking destination.

“From there on we started investing in publicity and contacting magazines and everything started growing pretty fast. We’ve been able to invest more in trail building and better vans and guides for our guests.”

Freeride Madeira are now gearing up to welcome the Enduro World Series (EWS) to the island on May 14, a moment sure to make their mark on the world map even firmer than it already is.

The tour date will be the climax of a whirlwind journey and a vindication of these three talented locals’ efforts.

“After Sam and Mark came over they mentioned how good Madeira was for riding and being EWS riders, they told me at the time it would be a perfect destination for a stop on the tour,” John concludes. 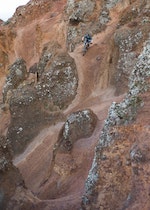 “They got me in contact with the director of the EWS, Chris Bull, and he invited us out to Italy to have a meeting and see how the EWS is organised and get some ideas.

“After two years of more trail development in Madeira, and having had Jacob Gibbons, official journalists and lots of other people from the EWS going back and telling Chris how good it was over here, he finally came to Madeira and said “you’re part of the family for 2017”.

“It’s incredible how much we’ve grown in the past two or three years. We have a really good team and I’m proud of everyone at the business – from the trail builders to drivers and beyond.

“Everyone puts their lives and hearts into it and we work really hard from sunrise to sunset. That’s why it’s developed so quickly. We’re working a lot to make it a unique event for 14 May next year and let’s see if we can make it the best EWS ever.”

We have no doubt that the flagship series will be a rip-roaring success and bring further attention to the island within the world of mountain biking. For the three guys behind it, that would mean “mission accomplished”.

Cycling I Am On A Mission inspiration