Vertigo. We know that’s not the grammatically proper way to open up an article, a sentence, or pretty much anything else, but it felt like the only fitting opening to an article about a trials biking champion riding a bike along a slackline, 112m above the ground. 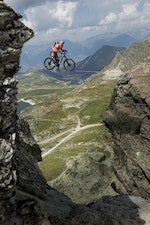 Our jaws dropped when we watched this video. They dropped simultaneously and they’ve not risen since.

We’re writing this with our jaws on the floor, with all sorts of dust getting into our mouths and nothing we can do about it. It’s not healthy, and it’s sure as hell not hygienic, but there was no possible way of preventing the outcome.

Belgian Red Bull athlete Kenny Belaey, a four-time UCI trials biking world champion, just rode his bike along an 18 metre slackline, 112m above a gorge at an altitude of 2,700m. And that is a sentence that we never, ever expected to come even nearly close to writing.

Speaking to Red Bull, Belaey said: ““The moment my wheel touched the actual slackline for the very first time, after months of training and preparation and while being so self-confident, the only thing I could think of was, ‘This is impossible!’.

“But with proper belief in my abilities, and sheer focus and determination, I managed to succeed. This was without a doubt the hardest challenge I’ve ever faced.”

When you end up so scared you start singing the Foo Fighters...

8 Amazing Mountains Shacks You Can Rent On Airbnb

Why pay big bucks for a fancy hotel when you could stay here?

8 Amazing Mountains Shacks You Can Rent On Airbnb

Watch: Burton Snowboards has Just Released Its Second Web Edit Of The Season, And It's A Must Watch

The Latest Web Edit from Burton Snowboards Has Just Dropped, And It's A Big One...

awe surprise video
We use cookies on our website to give you the most relevant experience by remembering your preferences and repeat visits. By clicking “Accept All”, you consent to the use of ALL the cookies. However, you may visit "Cookie Settings" to provide a controlled consent.
Cookie SettingsAccept All
Manage consent