Hamish MacInnes. A real legend of the climbing world. He’s joined over 20 climbing and mountaineering expeditions, made Everest attempts, invented and produced many groundbreaking technologies for climbers whilst founding mountain rescue and avalanche centres across Scotland.

Coming from an engineering family, Hamish was always tinkering with and building things. This started off with Hamish building a car at the age of 16 – the same year he first climbed the Matterhorn. It was therefore inevitable that Hamish would combine his passions of climbing and engineering to create equipment to benefit the climbing community.

“I was primarily interested in safety for climbers, not profit”

This started with the production of the first all metal ice axe back in the 1940s. A development that Hamish should be credited for – but perhaps isn’t – is the down turned ice axe. By simply turning the axe head in a downward position it gave climbers much more bite into the ice, compared to traditional horizontal pointing picks – which were prone to ripping out.

Whilst Hamish’s Terrordactyl ice axes were used widely within the climbing community, large climbing companies were fast to copy his winning designs and make them at a cheaper price than Hamish. Hamish was not at all upset about these questionable ethics, however: “I was primarily interested in safety for climbers, not profit.” 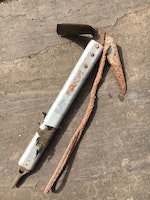 Hamish then went on to invent the first mountain rescue stretcher that was able to fold up and be carried like a backpack – a design that is still used to this day.

Sadly all of these achievements could not stop Hamish from being institutionalised against his will. This was after Hamish was found disorientated outside his home in Glencoe, thought to be a danger to his neighbours. He was soon diagnosed with delirium and sent to the psychogeriatric detainment in Fort William.

Following this detainment, Hamish soon found that his memory of all his time in the mountains, leading expeditions and knowledge behind climbing equipment was fading. Luckily all of this experience had been systematically documented by Hamish, in film, photographs and books – this was Hamish’s way of reliving and clawing back the memories of his fantastic life.

Final Ascent is a film that tells the story of Hamish’s dogged determination to relive his memories again and win the internal struggle with mental health.

It’s not like your regular climbing film with a focus on huge exposure, stunning locations and power screams. It’s more of a story about how Hamish, a man who lived his life around the freedom that the mountains provide, found his identity again after the period where he was kept in a claustrophobic environment against his will.

Final Ascent is screened across the north of the UK over the next few months. Head over to finalascent.co.uk to find a screening near you. Well worth a watch.

Adventure anticipation information inspiration sadness
We use cookies on our website to give you the most relevant experience by remembering your preferences and repeat visits. By clicking “Accept All”, you consent to the use of ALL the cookies. However, you may visit "Cookie Settings" to provide a controlled consent.
Cookie SettingsAccept All
Manage consent