Released in 2014, The North Face Thermoball Jacket comes with some pretty impressive claims attached. The brand believe that it represents a “revolution in insulation technology”.

The main reason for this claim is the material they’ve used as insulation, also called Thermoball. Based on PrimaLoft, the synthetic alternative to down, it’s designed to pack down small like down and offer similar warmth, but also crucially The North Face claim it will outperform down in the wet.

So how does its performance match up to the claims?

Well it’s certainly warm. Having had one of these for just over a month, the Outside Times has worn it on a variety of trips, including mountain biking missions to the Shropshire Hills, a very wet ride in the Peak District and a trip to Nepal that included kayaking, biking, hiking and more.

Whether we were wearing it as a mid-layer (under a Gore-Tex shell or dry suit jacket) or as an outer jacket in its own right, it’s kept us warm in a whole variety of conditions, whether that’s changing in a sodden Sheffield carpark or sleeping under canvas high up in the Himalayas.

It’s performed in a variety of conditions, from changing in a sodden Sheffield carpark or sleeping under canvas high up in the Himalayas.

Independent tests by Kansas State University have apparently shown that the Thermoball has warmth that is equivalent to 600-fill goose down – roughly the same as is used in mid range sleeping bags.

As far as packing down goes, The North Face admit that the Thermoball material doesn’t quite pack as tightly as down. But this jacket isn’t particularly bulky anyway and a cool little design feature means it folds away into its own pocket, making a neat, lightweight package that’s about 20cm long and 15cm wide. But it’s when it comes to performing in the wet that this jacket really excels. As a mid-layer, you can sweat pretty heavily into it and not notice a thing, and as an outer it absorbed an impressive amount of South Yorkshire drizzle without becoming noticeably heavier, wet or cold in the slightest.

Combine this with a nice-looking design (available in a range of bright colours) with a comfy hood and neat features like elasticated cuffs and zippered hand pockets and you have an extremely versatile and useful piece of kit. 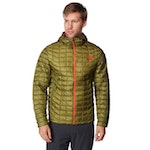 Watch the jacket put through its paces by adventurer Mark Beaumont here:

Adventurers aren't always men, as Jacki Hill-Murphy set out to prove when she retraced the steps of these women's epic expeditions

Worsley was attempting to be the first person to cross the continent unaided.

The behind the scenes story of the movie Everest

This Colorado Mountain Guide Made 'Everest' One of Hollywood's Most Legitimate Climbing Films. Here's How...