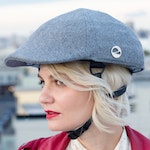 Road safety is a more contentious issue than ever these days, with cycling head-cam warriors seemingly finding themselves in battles with buses, taxis and cars on a daily basis, and highlighting the problems that nearly every commuting cyclist has faced at some point as they go.

In this time of uncertainty though, there is one thing we can always count on – the fact that humans will come up with ridiculous answers to serious questions, including the question of how to keep our riders safe when they’re out on the roads.

As we imagine you guessed from the giant bold headline sitting a few centimetres north of these words, we’re talking about bike helmets of course, and the quite peculiar shapes and sizes that some of them now take.

We’ve seen some truly ridiculous bike helmets when we’ve been out riding or surfing around on the wacky world of the net. Here are some of the most bizarre… 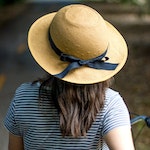 No, we’re not just suggesting that you replace your old bike helmet with a regular straw hat – that would be inadvisable and likely fly off your head at the first whiff of wind – this is actually a bona fide bike helmet, just not as you know it.

The hats are actually an accessory of sort which are custom-designed to fit onto YAKKAY bicycle helmets and won’t come off unless you hit over 30mph. 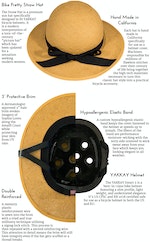 Bikepretty.com write that “it is a modern interpretation of a turn-of-the-century “picture hat” which has been updated for a sensation seeking modern women.

This, err, fashionable option was sculpted by a group of Royal College of Art graduates, who used the pulp from mulched newspapers to form helmets for London’s famous cycle hire scheme.

The pulp was mixed with adhesive and pigment then vacuum-formed into shape, before being dried out through heat.

The idea was that these helmets would be offered in nearby vending machines to the Boris Bikes for around £1 each. We’re unsure about the safety credentials…

Ever wanted to ride your bike while pretending you’re in Peaky Blinders, but also maintain an above average level of bicycle safety? Then do we have the hat for you!

The Closca Newsboy Bike Helmet complies with the most stringent safety certifications in the world, they fold into a compact shape so they’re easy to carry around, and they come in a variety of colours, including this rather outgoing tartan number.

We all know a mate who needs one of these in their lives. 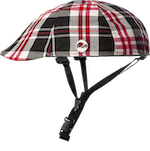 The Hövding has become somewhat of a cult classic amongst the cycling world in the past few years.

Developed in Sweden, the Hövding 2.0 is on sale for £219, and is to be worn as a collar, with the collar enclosing the airbag system that protects the head in event of a crash. Hövding started off as a master’s thesis in 2005 and the idea then went viral a few years back.

The collar is made of black, waterproof, dirt-repellent functional fabric. Furthermore, it comes in a bag that looks like a pair of underpants.

Another vintage addition to the crazy bike helmet list is the classic watermelon, because at this point it has legitimately become relatively normal to kick about town wearing a watermelon on your head in case you get hit by a car. We love the world some times.

This is produced by Nutcase and it’s actually a really solid protective helmet as well as looking like a slice out of everyone’s favourite overly large piece of fruit. Don’t bite into it on a hangover though. It doesn’t work as well as a normal watermelon in that respect.

…because what screams safety more than having an ass perfectly cushioning your head?

We know this is more of a motorcycle or moped thing than a bicycle helmet, but it’s just so garish it had to go in. We’d comfortably say though people are going to be more inclined to hit you if you’re wearing one of these though. Look at it.

If the ass is a bit much for you, you can also opt for the more famous ‘bald man’ helmet or the severely underrated, ‘shit IT consultant’ helmet. 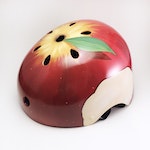 So it’s a bike helmet but it’s also an apple. What’s not to like? They say that the apple never falls far from the tree, but if it does fall off a bike then it’ll be up again in no time with this protective lid. An apple a day certainly will keep the doctor away in this case.

All of Inkwell’s apple helmets are one-of-a-kind, hand-painted and scratch and water-resistant, and this is no bad apple – it’ll keep you safe too. It’s definitely the apple of our eye. 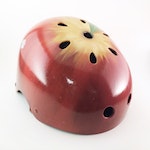 So this Raskullz Fin Hawk helmet is available for anyone ages five and up, and if we’re being honest, if we saw a five year old kicking about on a bike with one of these we would probably die with happiness. 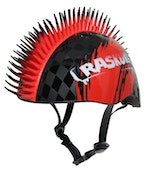 If you’re an adult on the other hand, drivers are probably going to think you’re an absolute bell-end for wearing this thing and give you even less respect than they already show most. So, err, careful out there.

Folding bicycle helmets are actually quite the technical wonder. We have a lot of time for them, and the Morpher Helmet is right up there at the front of the pack!

Winner of Edison Gold Innovation Award and of Popular Science Magazine’s Safety Invention of the year in 2014, the Morpher folds down to a tiny cylinder, so it’s perfect for commuters and everyday city riders.

All the components are completely recycled, and the technology is going to be used for skiers, skaters, snow boarders and more in the future. They also want to get them in vending machines in major cities which sounds like a great idea to us. This is dope!

From the people who brought you the watermelon helmet comes the Ladybird helmet, the exact same lid but painted like a ladybird. Ooft – and isn’t it fierce?

What metal death machine would dare think twice about clipping you at a corner when you have this lord of war printed firmly on your head?

Are these the Worst Cycle Lanes Ever Built? Some of them are Seriously Awful

anticipation laughter
We use cookies on our website to give you the most relevant experience by remembering your preferences and repeat visits. By clicking “Accept All”, you consent to the use of ALL the cookies. However, you may visit "Cookie Settings" to provide a controlled consent.
Cookie SettingsAccept All
Manage consent