This bike seat with a bit of bite is either the coolest thing you can sit on while you ride or the most ridiculous. We’ll leave that to you to decide.

The Predator look-alike is appropriately named ‘Bite It’, and was created from plastic-cast taxidermy parts by Canadian designer Clem Chen for the ‘Saddle-Up!’ art show in Vancouver.

It’s incredibly creepy, that goes without saying, but there were plenty of other sick seats on show at the Canadian art show that were just as odd; some cool, some outrageous and some near-offensive. Here are ten of the, errr, best? 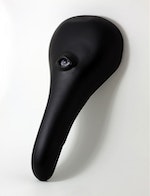 These Rollerblades Are Powered By Rockets – And They Still Look Incredibly Shit!

This Sculpture May Look Like A Dead Animal’s Head, But It’s Actually Way More Mental…

Dumpster Diving | Could You Eat Out Of Bins For A Week? We Gave It A Go...

The UK dumps 1.3 billion tonnes of edible food every year. Mpora ate actual rubbish for a week to explore the crazy world of UK...

Dumpster Diving | Could You Eat Out Of Bins For A Week? We Gave It A Go...

Sammy Carlson might just be the bravest skier of all-time.

Brett Rheeder Built Himself an Insane Dirt Jump Course... And Has Shredded it in His "This is Home" Edit

This is some mountain bike madness that you don't want to miss...

Brett Rheeder Built Himself an Insane Dirt Jump Course... And Has Shredded it in His "This is Home" Edit

23 Essential Truths About Taking on a Snow-Based Music Festival

Helpful hints and tips for tackling a week of bass, sweat and beers...

23 Essential Truths About Taking on a Snow-Based Music Festival

Holy shit, this is a bit too close for comfort

Depending on your point of view, these are either brilliant or terrible.