This Christmas, it feels like there’s a lot of bad vibes and energy about the place (thanks politics). So when a nice, feel good, story comes along we’re definitely keen to say “Hey. Look at this thing. Maybe the world’s not such a total hellscape after all.” Here’s one of those things.

“We can give them the space to breathe, to move and inspire them to try new things”

Living up to their company’s deep-set belief that sport has the power to change lives, adidas Outdoor are proud to announce a new pilot project that’ll introduce inner city primary and secondary school kids to climbing.

As part of its mission to bring people to the outdoors and vice-versa, the Urban Climbing Project is all about introducing climbing to young people as part of an active lifestyle that will improve health, happiness, and creativity.

With lingering perceptions around who climbing is actually for, the project is looking to challenge these perceptions and shine a spotlight on the sport’s inclusive nature. The project has started in Manchester with 83 local schoolchildren, from six different primary and secondary schools, attending a pilot of the scheme at The Climbing Centre in West Gorton, Manchester.

Kids between the ages of eight and fourteen were offered the ultimate introduction to climbing with Olympic hopeful Will Bosi. Will ran them through the basics of bouldering and rope climbing before giving the Honnolds of the future the chance to climb for themselves (for many of them it was their first experience of the sport). The day was wrapped up with certificate presentations and a Q & A session with Will – part of the Team GB setup and someone looking to participate at Tokyo 2020 where climbing will, of course, be making its debut as an official event. 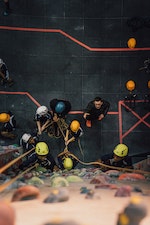 “I was privileged to be given the opportunity by adidas to be involved in this project where kids of all ages get the chance to discover why climbing is such an amazing sport, said Will, “For the sport reaching out to all groups irrespective of background is vital to create a more dynamic and thriving community of climbers who push boundaries indoors through competition or outdoors on real rock.”

Working together with the National Indoor Climbing Award Scheme (NICAS), adidas Outdoor hopes to expand the Urban Climbing Project in 2020 – offering learn to climb sessions to over 365 kids from inner city schools across the UK.

Director of adidas Outdoor UK Director Lucy Speakman is excited about the positive change she’s hoping the scheme will bring to young lives: “Research shows that many young people spend too much time living an indoor lifestyle where it’s easy to fall into the trap of becoming inactive. We believe that by encouraging young people to get outdoors, we can give them the space to breathe, to move and inspire them to try new things.” 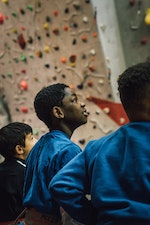 Climbing Walls in Manchester | Where To Climb In The Northern Powerhouse

In 2017, Evans entered the 251km Marathon des Sables on the back of a pub bet. He finished third