The Incredible Story of Skateistan

The Incredible Story of Skateistan

Growing up in Afghanistan is not easy. In a nation that has been through decades of turmoil and poverty, responsibilities build quickly, education takes a back seat, and sporting opportunities are near non-existent – particularly for young women.

Children lose out on much of what would be described as a ‘normal’ childhood; the joy, the discovery, the risk-free carelessness. Instead, they face a daily fight for survival and for the right to remain a child.

Since 2007 though, one organization has been aiming to change all that. They’ve been aiming to develop kids’ education, to engage the young in a carefree manner and give children a real childhood. How? Through skateboarding of course. The project was started in 2007 by Australian skater Oliver Percovich, right, on the streets of Kabul. When he first went to the Afghan capital, he had heard rumours that certain sports were banned altogether, and he saw no signs of any girls playing sports in the country.

Oliver set out to build a project that would change young lives for the better, and in his own words, to provide Afghan solutions to Afghan problems.

“It wasn’t easy to introduce a new sport to Aghanistan,” he told Mpora. “When I first started skating the streets of Kabul, kids and parents saw the skateboard as a toy, but increasingly it’s being recognized as a sport.

“Children in Afghanistan have been through decades of conflict, social dislocation, poverty, and often have to grow up too fast. Afghan kids are tough – they have to be. But when it comes down to it, kids just want to be kids.

“Skateboarding provides that because it’s fun and challenging. It lets them forget their problems for a moment. It breaks down all these deep-seated cultural barriers too.

“Once kids are hooked on skateboarding, so much more is possible, especially in the classroom. Skateboarding itself teaches important life skills, like creativity and problem solving.

“It’s a place where kids can play and escape the stress of everyday life. We offer opportunities to access education, to gain confidence, build life skills, and empower children to be agents of change.”

One particular area where Oliver and his team are targeting change is in the female community in Afghanistan. When it comes to equality, the country still has a long road to travel.

“Most Afghan girls don’t go to school. Very few have jobs, and often they don’t get the opportunity to participate in sports..."

Under the Taliban, women were not even allowed to leave their house by themselves, and while that has changed, most still grow up jobless to look after families and tend to households. Female literacy is a shocking 13 percent.

Oliver continued: “There’s a huge lack of educational and work opportunities for women in Afghanistan. 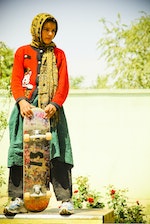 “Most Afghan girls don’t go to school. Very few have jobs, and often don’t get the opportunity to participate in sports. When I saw that it was possible for young girls to skateboard in the streets, that me made me think about how the fun of skateboarding could be used to connect more Afghan children with education.

“A common love of sport builds respect and understanding between youth from all different ethnicities and social backgrounds, which is a huge barrier to overcome in Afghanistan.”

Indeed, Skateistan employs loyal staff to run their projects where possible, and five of their instructors were recently awarded certificates of distinction from the Afghan parliament, two of whom were female. It certainly shows how far the community has already come.

Out of the vast numbers of students involved in the project, a massive 40 percent of students are girls as well. Is there any other one place in the world where up to 300 girls a week go skateboarding? Almost definitely not.

That makes skateboarding the most popular female sport in the country, and rather amazingly, that makes Afghanistan one of the most accessible places to learn to skate.

“When we opened the Kabul facility in November 2009, we had built all of the ramps with the students and they were skating real skateboard ramps for the first time,” remembers Oliver. “The looks on the girl’s faces were priceless.

"Skateistan reminds people why they started skateboarding in the first place. If you strip everything else away, the essence of skateboarding is fun and friendship..."

“Seeing them skating together – around 25 boys and girls – was a really exciting moment. I thought then that the skate school really has potential to change the outlook of youth in the city, and ultimately it has done.

“What makes it worthwhile for me now is to see all these young motivated Afghans, many of who used to be students and street working children, get to attend school. Some of them even run the skateboard and classroom lessons at Skateistan.

“16-year-old Hanifa used to sell tea in a local park and she’s now one of Afghanistan’s most talented skaters. She joined in 2010 and quickly became an excellent female role model and now a teacher. It’s so great to see that she has made a better future for herself.”

Indeed, Hanifa is now an integral part of the Skateistan team in Kabul. She works as an instructor, regularly teaching classes and participating in staff development training sessions. It just shows the widespread impact the project can have.

All this good work has hardly gone unnoticed either. As well an array of awards for their amazing efforts, which have expanded to include schools in Cambodia, South Africa and Mazar-e Sharif in northern Afghanistan, they have an array of public backers – most notably the birdman Tony Hawk.

“Tony has been a Skateistan supporter for quite some time, and in 2013 he came to visit our project site in Cambodia. He’s doing some amazing stuff with the Tony Hawk Foundation (THF), building skateparks for kids in under-privileged communities in the US. So he gets how we can use skateboarding to improve kids lives. 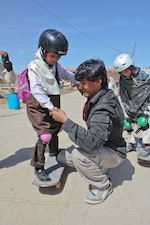 “Now the THF is helping Skateistan, it’s also the first time they’ve ventured outside the US. It’s absolutely amazing that Tony Hawk and skaters around the world have gotten behind Skateistan.

“I never imagined I would be on stage with him like I was recently accepting TransWorld Magazine’s Eric Stricker Memorial Award. That was a huge honour. The skateboard industry has been especially supportive and their generosity has been crucial – Fallen, Zero, Theeve, TSG, Spitfire, IOU Ramps, Official.

“I think the reason is that it reminds people  why they started skateboarding in the first place. If you strip everything else away, the essence of skateboarding is fun and friendship.”

Certainly, a recent fundraising bid to keep Skateistan rolling raised well over the requested $60,000, and further expansion is now on the cards for the charity.

It’s a heart-warming story, and it’s one that will now be able to further its work in providing even more kids with safe spaces and growing their current projects in their three countries of choice.

“This year we will be building a skate school at the newest Skateistan project site in Johannesburg, South Africa” concluded the founder. “After that we plan on expanding our programs across the globe, one skate school at a time.”

Four schools in three deprived countries for now then, but who knows what the future holds for the project. The potential and the boundaries are limitless, and after seeing the uplifting success of their work so far, it’s hard to see Skateistan stop rolling any time soon.

If you would like to help the cause, you can donate to Skateistan from their official page here, to help the team continue to build and change more lives in more countries.

article awe inspiration longform pride surprise
We use cookies on our website to give you the most relevant experience by remembering your preferences and repeat visits. By clicking “Accept All”, you consent to the use of ALL the cookies. However, you may visit "Cookie Settings" to provide a controlled consent.
Cookie SettingsAccept All
Manage consent