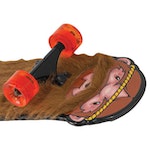 Apparently you’re not supposed to judge a book by its cover but we’ve probably all been guilty at some point or another of buying a deck just because of it looks good.

Thoughtful skaters will weigh up the pros and cons of the top brands before committing to a new board, making sure they have the most responsive and durable piece of kit they can find.

But most of us will just dive in like a kid in a sweet store, working off gut reaction rather than trawling through technical specs.

Skate graphics can get seriously strange…

Of course everyone’s gut reactions are different, but thankfully in the world of skating there’s something to fit all tastes no matter how strange – and frankly it can get pretty strange.

From bearded boards and 3d insect monsters to hardcore pachyderms and edible astronomy. Just check out these examples…

So that’s a pretty impressive elephant right? About to turn the ringmaster into so much toejam with one swipe of his size 100 feet… 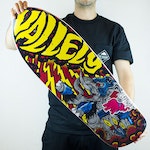 Not only does he look like he could pulp a whole big top full of ringmasters without even noticing, but he’s wearing fucking armour!

Plus there’s lightning, some sort of explosion going on and three, yes three spears to get any of those puny humans that his blood red murder gaze doesn’t instantly melt into a blubbering mess.

Homer Simpson is one of the most accident prone animated characters ever and on top of that skateboards don’t really like him.

So the yellow father of three might not seem like a natural fit with skating, but that hasn’t stopped Santa Cruz from bringing out a range of Simpsons decks.

Though Homer’s, Marge’s and even Maggie’s cheerful mugs might brighten your day it’s still disconcerting to see trucks bolted into something which resembles a human face.

The thought of smashing it into rails almost seems sadistic – although though face smashing is of course an integral part of skating.

Oddball skate brand LAB has more than its fair share of strange board graphics. Among the Danish label’s highlights are these three examples from the Kindergarten range, designed by Emil Kozak.

The first entry kinda makes sense (everyone knows the moon is made of cheese and everyone loves cheese) but those other two look like kindergarteners’ nightmares come to life.

We have a tree growing out of an apple core deep inside a man’s stomach followed by the only kind of warm shower that most people won’t enjoy.

Admittedly these make sense in a kid logic kind of way, but does anyone really want to relive all those mentally scarring images from your childhood? I mean we only just got over the news about the Easter Bunny…

The strange minds at Santa Cruz have decided that what we really need is a board with its own facial hair. 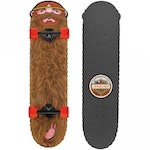 What are you supposed to do with this honestly? Slap on some moustache wax  on while you’re adjusting your trucks?

And don’t even get us started on that rabbit… The East Anglian crew have put together a collection of three suspicious felines all in various stages of being milk drunk.

There’s ‘thousand yard stare’ drunk, complete with monocle, ‘what the crap happened?’ drunk in the middle of some sort of horrible taxidermy experiment and finally, ‘feeling frisky’ drunk who alarmingly seems to be looking right at you…

Ok we don’t even have a clue what’s going on here. There’s some sort of blue cat/man/worm grandpa who seems to be fighting off a flock of ravenous flesh eating butterflies?

Luckily he brought his spare arms with him. All 25 of them. Pintrest, you have a lot to answer for. Nice one Primitive Skateboards. Way to ruin Christmas for everyone. I mean we kind of like the pro gun control message here, but nobody wants to see the jolly fat man who brings us presents each year sprawled out on the floor with a couple of 9mm rounds in his chest do they?

Except maybe the Tooth Fairy, she’s always hated him.

Don’t be surprised if you get coal again next year, Primitive.

Illustrator Pat Higgins is a unique individual who thankfully created only a short run of this toe curling deck design.

For starters the colour scheme is pretty OTT, from the unidentified blue gunk slathering the teeth, to the leprous albino tongue and the man’s gnarly yellow finger nails.

This deck could be called a lot of things but attractive probably won’t be on that list.

Then there’s the fact that the graphic just raises questions. Is this a little guy falling into a normal sized mouth or a regular sized dude being chased by a giant one? How did this whole situation come about in the first place?

Most interestingly look at the guy’s teeth, they kind of look like the big ones right? Does this mean there’s another little guy somewhere inside his mouth? And is there another even smaller one inside that?

Thanks Pat, we’ll be up all night figuring that one out.

This deck – created by Skate Mental – might look like a lawsuit waiting to happen. But it’s actually based off a real photo of Michael Jackson and ET adopting the same pose…

You almost don’t need the “alien vs. predator” line to make that creepy do you?

10) The Before and After

Anti Hero have a long history of creating awesome and erm… eye-catching graphics. This one certainly falls into the latter category.

We’re not sure if it’s supposed to read as a before and after, or simply as a nasty juxtaposition. Either way it certainly sticks in the memory!

This is Incredible! An Interactive Skate Video... That YOU Control With Your Keyboard

This is Incredible! An Interactive Skate Video... That YOU Control With Your Keyboard

Which is Gnarlier? 8 Stairset Slams That Put Madonna's Fall to Shame

Bitch please, skateboarders have been falling down stairs for years

Which is Gnarlier? 8 Stairset Slams That Put Madonna's Fall to Shame

It's Easy To See Why This Roof Dropping Skate Edit Is Going Viral...

It's Easy To See Why This Roof Dropping Skate Edit Is Going Viral...