Why we chose the Scarpa F1 LT: Lightweight, powerful, comfortable

When Candide met Faction, the CT 5.0 was born. When Rivaldo met Ronaldo, a football masterpiece was brought to life. Some of the best things in life have come from a marriage of two things. This is certainly true for the all new Scarpa F1 LT – a ski boot that brings together the best of both worlds from the Scarpa Alien RS and the Scarpa F1.

In bringing these two boots together, you’re left with a boot that barely tips the scales at 990g, and one that carries some extremely impressive downhill performance. This, ladies and gentlemen, seems one step closer to the Holy Grail of lightweight ski touring boots.

“This, ladies and gentlemen, seems one step closer to the Holy Grail”

In merging both the FT and Alien, Scarpa has taken the best bits from each boot. On the side of the Alien, you’ve got the BOA instep closure, the same single motion ski / walk lever and a pretty similar (but reinforced) carbon-infused Grilamid shell. In terms of the F1 features, there’s the beefed up top buckle and shell reinforcement – which is said to improve boot stiffness by up to 30%.

A thin booster strap has been added to the top of the cuff. Some may prefer to remove this booster in favour of slightly quicker ski / walk transitions, but it will add that touch extra performance boost – so think twice before giving it the snip. Scarpa have also sat the foot lower in the boot, which gives you a little more control, and importantly for those with wide feet, this adds around 2mm of extra width in the forefoot.

Similarly to the Alien RS, the F1 LT features 72 degrees of range of motion. This is quite frankly all anyone will ever need in the backcountry. Rocky ridge scrambling, endless bootpacks and hour after hour of skin track will be just as comfortable as they are in the Alien RS (that’s pretty damn comfy, in all honesty).

All of this amounts to a whopping (we joke) additional 70 grams of weight, over that of the Alien RS – that’s about the same weight as an egg. Hardly anything you’re going to notice, even on those big missions into the backcountry.

This additional weight has created a boot that’s more than capable of driving skis up 100mm in width. Just like the Alien RS (which was suitable with skis up to 90mm), we could see proficient skiers handling much wider lightweight touring skis in the right conditions with no issues at all.

Who Is The Scarpa F1 LT For?

Perhaps you loved the look of the touring efficiency of the Alien RS, but held back from pulling the trigger due to the limited performance from that boot. Or, maybe you’ve been looking at many of the 1,100 – 1,300 gram touring boots, such as the Backland Carbon, and wished they were a little lighter? Well if that sounds like you, then this is sure to be the boot that ticks all the right boxes.

Scarpa have again managed to set the bar to another incredibly high standard in terms of what can be done in a lightweight boot. This is going to be the boot for those that want to log the vertical day in, day out, without too much of a hit to performance. 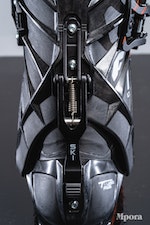 Yes, this boot isn’t going to drive a pair of freeride planks half as well as, say, the Salomon Shift 130. It will though get you to the top of your summit, ready to rip down with a pair of fresh legs, way ahead of your mates – and that to us, is reason enough to bring the Scarpa F1 LT out on our next tour.

What Is The Scarpa F1 LT Good At?

Ski 100 2020/21 Ski Boots
We use cookies on our website to give you the most relevant experience by remembering your preferences and repeat visits. By clicking “Accept All”, you consent to the use of ALL the cookies. However, you may visit "Cookie Settings" to provide a controlled consent.
Cookie SettingsAccept All
Manage consent