It’s not uncommon for a student ski group to leave their hotel room looking a little worse for wear.

Maybe shower curtains around the building have fallen victim to a toga party, or perhaps a game of ‘platey-platey-smash-smash’ got a little out of hand.

If you thought you and your mates were bad though, this tsnuami of shit caused by three fraternities from the University of Michigan last weekend will absolutely blow your mind.

The frat group – said to be made up of 120 people in 45 rooms – were escorted from their hotel at a Northern Michigan ski resort by Police after causing damage to the premises estimated at well over $50,000. That’s got to be more than just a few smashed plates and a load of missing shower curtains.

The UMich chapter of Sigma Alpha Mu are reported to be the serial offenders, chalking up $50k worth of damage at Treetops Resorts, while two other unnamed fraternities are said to have run up bills into the thousands at Boyne Highlands Resort as well.

“There was food, beer, alcohol, the walls, carpet damage, ceiling broken down and furniture damage.”

The pictures from the Sigma Alpha Mu destruction (described by cleaners as looking like the ‘aftermath of an earthquake’) tell quite a story themselves.

The group actually brought the freakin’ roof down, and not in the metaphorical sense – they literally caused the entire roof in their corridor to collapse.

Speaking to 9 & 10 News over in America, the general manager from Treetops – a man who must’ve listened to a lot of James Blunt and eaten a lot of ice cream lately – said: “We had a group of a fraternity that was visiting and had an excessive party and did damage on the resort. 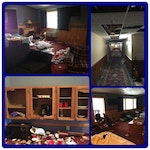 We can only assume that 9 & 10 News cut the parts out of the interview where the manager started swearing down the camera or sobbing uncontrollably. Either that or he’s the most restrained human being of all time.

Apparently both ski resorts are now in touch with the University of Michigan itself, which has issued the following, poorly paragraphed statement in response to the madness:

“We are very disappointed in the behavior of some of our students during a weekend visit to two northern Michigan ski resorts. I want to assure you that the organizations and the individuals involved will be held accountable for their actions. While we are still gathering information, we understand that the damage at Treetops Resort and Boyne Highlands is expected to total in the thousands of dollars. U-M staff members in the Office of Greek Life have begun meeting with the presidents of the fraternities and sororities involved. We expect full payment for all damages. The local Greek chapters are in the process of notifying their national organizations, which could bring their own sanctions. We are confident the national organizations will take this seriously and will work through this situation in collaboration with the university. Additionally, these incidents will be addressed through the Greek Life student judiciary process on our campus.”

As for Sigma Alpha Mu, the fraternity have also released a statement condemning the actions of “a few of their chapter members” (although we doubt just a few folk could’ve caused this much mayhem).

Joshu Kaplan, president of UMich Sigma Alpha Mu, released this statement with regards to the events:

“We are embarrassed and ashamed of the behavior of a few of our chapter members at Treetops Resort over the weekend of January 17-18. This behavior is inconsistent with the values, policies, and practices of this organization.

“Our chapter accepts full responsibility for this incident and we will be working with the management of the resort to pay for all damages and cleaning costs.

“We will work within our own organization and with university officials to hold those who are responsible accountable for their actions.”

The whole story is just absolutely crazy. It’s definitely the craziest – or at least the most expensive – student ski bash we’ve ever heard on the grapevine.

There’s been rumours of folk knocking hotel walls down and getting kicked out for nudity in the past, but $50,000+ worth of damage? These guys must be really shit at skiing…

He Backflipped Over A Police Car And Broke The Internet... Now Here's More Footage Of Skier Candide Thovex

He Backflipped Over A Police Car And Broke The Internet... Now Here's More Footage Of Skier Candide Thovex

If you've ever been high while you're up high, you'll know...

Remember the Ski Line Hailed as the 'Greatest Ever?' They've Just Released the GoPro Footage...

This is absolutely mind-blowing

Remember the Ski Line Hailed as the 'Greatest Ever?' They've Just Released the GoPro Footage...