Olympics and endorsements – it’s what it’s all about right? Well of course there’s a lifetime of gruelling training, four years of total commitment and then a global showcase of world beating talent to deal with first. But once everyone’s won or lost, those who’ve won generally go home to a heroes welcome, seeing themselves pictured everywhere and a bed made of money. Well sort of.

Of course, victorious athletes regularly make a buck or two out of their achievement from companies wanting to sponsor them. But, as we shall see below, it’s not always the companies who have the megabucks who win at Olympic endorsements.

Last Thursday, US trio of Joss Christensen, Gus Kenworthy and Nick Goepper filled the podium in the Sochi 2014 Olympic Freeski Slopestyle. It took just 24 hours for them to appear on the front of a box of Kellogs Corn Flakes.

Is this even real? The slopestyle dream team is on the cover of a cereal box! @josschristensen @guskenworthy. http://t.co/b5UVsxvbBI—
Nick Goepper (@NickGoepper) February 14, 2014

Likewise, it didn’t take too long for Snowboard Slopestyle Bronze medallist Mark McMorris to appear on a box in his native Canada. This time it was the back of Cinnamon Toast Crunch:

I suppose the amazing thing about these endorsements is the timing. It’s quite incredible that companies are able to get a picture of victorious athletes, print them on a branded box, fill them with cereal and get them stocked in a week, never mind 24 hours.

There’s nothing particularly weird about the endorsements themselves of course – Olympian on cereal box is really what everyone would expect. Topical? You bet. Good marketing? Bog standard.

But Snowboard Slopestyle Winner Sage Kotsenburg got a couple of slightly weirder endorsements that nobody paid for, yet both he and the companies involved benefited massively. Here’s how:

How Weird Won the Day

First of all, his name cropped up on a cocktail list in at the Talisker Tower Club in Deer Valley, Utah – the ‘Kotsenburg Park City Gold’, featuring High West Bourye whiskey, Cointreau, cranberry juice, lime juice and simple syrup. Basically it a slightly fruitier Old Fashioned.

But Deer Valley doesn’t even allow snowboarders to ride within its perimeters. Additionally Kotsenburg is 20 years old – thus not allowed to drink in the US of A.

Double weird endorsement. This double weirdness was enough to send the story semi-viral though, and both Kotsenburg and Talisker Tower Club got loads of column inches. Problem is, I doubt the Deer Valley bar got much out of it, apart from some banter with punters.

Things took a rather fascinating turn when Kotsenburg tweeted:

Ahh I wish the Sochi medals were made out of bacon thoooo..!!

Pennsylvania-based Godshall’s Meats spotted the opportunity, and made his dreams come true, creating a turkey bacon medal in his honour and tweeting it right at him:

Of course the world went nuts for this and it was spread all over the Internet, creating one of the best marketing coups since Oreos won the 2013 Superbowl. Coverage on ABC, The Wall Street Journal and Mail Online is enough to make any food marketer create their own medal, made of the finest meats known to humanity.

It all came to a rather inevitable end last night, when Kotsenburg ate his medal on chat show Conan, with Godshall Meats getting their mention.

So who won? The massive company who are turning around cereal boxes with sponsored athletes on the back in 24 hours, or the bacon guys? I’d say the bacon guys clinched this one. 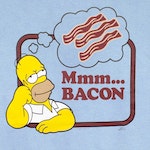 10 Great Places to Snowboard on a Budget

Getting away can be cheaper than you think!

10 Great Places to Snowboard on a Budget

Watch all the best bits from the weekend's competition here.