We’ve teamed up with Nikon, who’ve just released the brand new KeyMission 360 Degree action camera, to create a series which focusses on the missions that drive those at the cutting edge of action sports. Here we review the KeyMission 360 and look at how this innovative technology could be a game changer in snowboard filming.

Imagine the scene: You’ve just come off the hill with your mates and you’re sitting back in the apartment reviewing the footage from that final epic park run. You were in the middle of the group with the camera, so you sit and watch the follow cam shots of your mate who dropped in first.

It looks good, he’s nailed his tricks, stringing them together nicely and you’ve got the filming spot on too – he’s always in shot. As he gets to the bottom it’s high fives all round. You rewind the footage to watch it again… except this time, you swipe the phone screen and swing the camera round to watch the guy who dropped in behind you… and then your mate who was riding the rail line to your right.

“360 filming looks very much like an idea whose time has come.”

It might sound like sci-fi fantasy, but filming multiple riders at all angles simultaneously is now possible thanks to the invention of 360 degree action cams like the Nikon KeyMission 360. Not only are these great fun bits of kit, they also open up a whole new world of possibilities. In fact, we reckon they will spark something of a revolution in snowboard film-making. Here’s why… 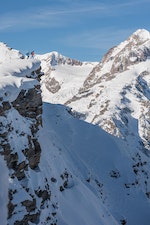 360 film footage puts the viewer right at the heart of the action – literally. Click and drag on the screen and you can see everything that’s going on around the filmer. We mounted the KeyMission 360 on a rider’s helmet and found that you can even scroll down to watch their own board slashing the slopes if you want to.

This gives the whole video experience a virtual reality feel, and with headsets like the Occulus Rift (or even Google’s low-tech Google Cardboard, which lets you turn your phone into a VR device) becoming increasingly popular, 360 filming looks like an idea whose time has come. There’s nothing more annoying that watching back some follow cam footage where the rider you’re supposed to be tracking goes in and out of shot. But with conventional action cameras this is pretty hard to avoid, however wide the angle of the lens is. Whether it’s a park lap or a tree run through powder, people speed up and slow down the whole time, put in turns in unexpected places and generally don’t make it easy for follow cam filmers.

With a 360 degree action camera like the Nikon KeyMission 360, this is not an issue. Wherever your subject is, however surprising their changes of direction or choice of tricks, you can rest assured that the camera will capture it all. So even if you’re only producing a conventional two-dimensional video edit from the footage, this camera is a very useful tool.

It’s not just follow cam shots – the 360 camera opens up a whole new range of possibilities for filming freestyle snowboarding. Gone are the days where you’d need to stand on the knuckle (or stairset, as above) and pan quickly to catch a rider’s trick – simply stick a KeyMission on a tripod and you’ve got them perfectly in shot all the way through the trick.

Not only that, but its compact size means you could do exactly the same at the end of a rail, box, wallride, whatever really. Want to capture the whole of your halfpipe run? Just stick the 360 cam on a tripod halfway down, switch it on and drop in. Mpora took the Nikon KeyMission 360 on a recent freeriding trip to a remote lodge in North Eastern Kazakhstan and were really impressed by its capabilities. The same things that make it great for filming park laps apply equally when you’re ripping down a tree run with your buddies, slashing, whooping and hollering as you go.

But don’t just take it from us. Neil McNab, one of Britain’s most experienced freeriders and the only professional British snowboard coach to hold the coveted UIAGM High Mountain guiding qualification, took the Nikon KeyMission 360 on a recent excursion and told us that he was excited about its potential.

As a man who spends his life exploring new zones and riding new lines, he thought it would be an excellent scoping and scouting tool. “If you were looking at a line that you wanted to ride and someone [had already] ridden it with a 360 camera you’d get a good idea of what the line’s like.

“With a lot of footage these days it’s either looking forwards or looking back – and with this you can see both.”

5) The Camera Itself is Very Impressive 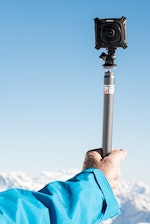 As well as its potential usages, Neil McNab talked about how easy he’d found the camera to work with: “You just put your hand up and punch a button on the top of it and hear it come on. It’s pretty simple to work.” We also liked the pared-down two button interface when Mpora tried it recently.

Not only are these controls idiot-proof, the camera is shockproof (you can drop it from two metres up and it will survive) and waterproof too (down to 30 metres). It’s lightweight, well built and as you’d expect from a camera brand with Nikon’s pedigree, the footage and photos it captures look great too.

You can check our review of its capabilities as a tool for filming mountain biking for a full rundown on the tech specs, but safe to say, we’re pretty excited about using this for our future trips to the snow.

I Am On A Mission