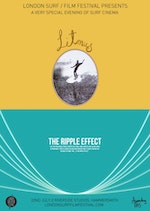 On Tuesday 22 July, the Riverside Studios, a Hammersmith hub of cinematic delights will be hosting an evening of surfing cinema as part of the London Surf Film Festival.

Andrew Kidman’s 1996 film Litmus will be shown in all of it’s weird and wonderful glory, featuring surfers Derek Hynd, Wayne Lynch, Tom Curren and Joel Fitzgerald. You can watch the trailer above.

Hazy, beautiful and thoroughly satisfying, it looks set to be an excellent watch.

The night will also host the world premiere of The Ripple Effect – a four part project directed by award-winning filmmaker Peter Hamblin.

The short films chronicle the sport’s defining moments and the surfers who sparked them, providing a visually stunning history lesson.

The first episode looks at the Witzig brothers, and you can watch it here to get a taste.

Tickets can be purchased from the Riverside Studios box office for £7.50 per screening on Tuesday 22 July 2014. There’s also a number of evening passes available for £10. For more information see the London Surf Film Festival’s website.

The Wave | Can It Make Surfing More Inclusive?

End of the Land | Surfing At The Extreme Tip

The Wave | Can It Make Surfing More Inclusive?

End of the Land | Surfing At The Extreme Tip

Stan Norman | Join The Pro Surfer For A Live Q&A

Connected By Water | The Story Behind The Big Wave Safety Movement

The group, focused on preserving oceans for future generations, has roped in Sir Paul McCartney to help