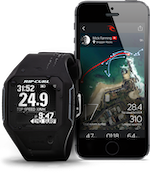 Last week, we posed this question to you: does surfing need strava? Rip Curl certainly thinks so.

The surf brand have launched their SearchGPS, the first GPS-based data measurement app for surfing. The idea is you wear the Search watch while surfing and it gathers data from your session and transmits to back to your phone.

Once back on shore, it will tell you how many waves you caught, your top speed, how far you paddled, where you were sat in the line up and what you had for breakfast three full moons ago.

“WILL SURFERS BE DROPPING IN YELLING “SEARCHGPS’ AS THEY FANG DOWN THE LINE?”

It follows on from apps like Strava, which have been super successful in the cycling and running worlds.

Here riders and runners track their routes on their phones using the Strava app and compare their times against other rider who’ve ridden the same stretch of road or trail.

It’s a great resource for people who like tracking their mileage and measuring their performance against others.

However, Strava’s success hasn’t been so much about its GPS technical excellence, but the fact that it’s all about public display of winning.

Strava has been so popular and so competitive that there are instances of mountain bike riders shoving others out of the way and yelling “STRAVA” as they race down the hill.

There is also currently a lawsuit in the US after someone died trying to better their time on a road section. Will surfers be elbowing other riders in the lineup or dropping in yelling “SearchGPS” as they fang down the line?

“One good tube can make a week, a feel good factor that can’t be reflected in a graph…”

The technology is set up to measure a few variables of surfing like number of waves caught, speed of a wave, position in the lineup and hours in the water.

For example, after one surf at Rocky Point this year Gabriel Medina was discovered by SearchGPS to have surfed 43 waves in just over an hour and a half. That roughly equates to one wave every two and a half minutes.

Now while that indicated he did a lot of paddling on the inside, and probably annoyed a lot of people, it is not something that surfers use a big barometer of their performance.

Surfers don’t usually brag about the number of waves they caught in each session. If that was worth puffing your chest about, you could just go out for a surf, catch 100 foamies, come in, download the data and call yourself a hero. They might have been the worst 100 waves of your life, but the data don’t lie.

Elsewhere the technology allows you to track just how much time you have spent in the water. Rip Curl cite a recent trip made by Alana Blanchard to Cloudbreak. In her four days in the Fijian resort she logged a total of 25 hours in the water, surfing an average of 6.25 hours per day.

Again this is a pretty cool stat to have at your disposal. Putting aside the brain-bending idea of surfing with Alana for six and a half hours a day in perfect waves at Cloudbreak, is it something that surfers are going to want to track? Perhaps they will.

“They might have been the worst 100 waves of your life, but the data don’t lie…”

Cycling events like #MilesForMay encourage Strava users to log as many miles as they can in a single month in attempt to climb the rankings and be award “trophies”.

If any device can incentivise surfers to spend more time in the ocean that has to be a good thing, right? I can even see the brand marketing managers right now cooking up their #SurfForSeptember hashtags as we speak.

The Search GPS also allows you to find out the speed you are traveling on your waves. They tested their pilot Mick Fanning out at his homebreak of Snapper Rocks and recorded a highest average speed of just over 30 kilometres per hour.

Mind you, this can be somewhat misleading. The three times World Champion is universally regarded as the fastest surfer on the planet and the Superbank is one of the world’s fastest waves. I’d imagine some of my efforts at say a four second closeout at Croyde might struggle to match the speed limit of a caravan park.

But the point, I suppose, is not to compare ourselves with the world’s best surfers, but with our own personal bests and our fellow surfers. Only time will tell if surfers are geeky and competitive enough to race home and download their data.

Another problem may arise if surfers start doing just that at some of the more protected or secret spots. Mountain bikers have already complained that some of their favourite and relatively unknown hidden trails have been “Strava-d”, meaning their exact location put online for everyone to come, ride and compare and maybe spoil.

However, with all this new technology it is simply a matter of waiting to see the reaction. Surfing has never been about the numbers, but about the feeling. One good tube for example can make a week, a feel good factor that can’t be reflected in a graph.

On the flipside, surfers have never had the technology to record their movements out in the ocean, so this is a new era. Previously most of our sharing was done verbally, which is not the most reliable form of data capture.

Tall tales have always been a big part of surfing, from the classic “you should have been here yesterday,” to the size of the surf and what exactly was the wave of day.

Now though, if you choose, each and every session can be documented, logged and preserved on the interweb for all eternity. Is that something that surfers will be up for? You tell me.

Fancy Surfing In Human Sh*t And Getting Beaten Up By Locals? This Is What The World’s Famous Surf Spots Are Really Like…

Everyone Knows Pro Surfers Hook Up With Hotties. But I Bet You Didn’t Know They Were This Hot…

Thought Your Sport Was Awesome? Here Are 9 Reasons Why Surfing Is Better…

Surfers get naked, jet off to the best locations and wear the best clothes... What's not to like?

Thought Your Sport Was Awesome? Here Are 9 Reasons Why Surfing Is Better…

Secret Parking Spots And Kipping In Your Boot: How To Surf When You're Skint

Secret Parking Spots And Kipping In Your Boot: How To Surf When You're Skint

Forget The Ocean, Why Not Try Surfing These Insane River Waves

Just watch out for the penis-biting fish!

Forget The Ocean, Why Not Try Surfing These Insane River Waves