Human beings do love taking something good and totally cocking it up, don’t they?

Here are a few of the very worst (or best, depending on how you look at it) inventions to come out of surfing…

You can’t argue with helmets, ever since Tom Carroll won Pipe Masters in huge surf with a fibreglass hat on his head. They protect your skull and your ears, both of which are important. And the Gath helmets were the best of their kind.

In a classic case of taking a good idea and making it bad one, the visor was one step too far. It made people look like a cross between a cyborg and a motorcycle cop, while also limiting vision and hearing.

I’ve seen a few prototype versions of these in my time, but have yet to see any go into in any time of production – mass, backyard or otherwise.

It is a surfboard that effectively folds in half, providing a functional surfboard in the water and a three foot piece of kit when you are traveling. The best of both worlds, right? Wrong.

Using a hinge type system or dowel rods that click into place, the boards always looked as ugly as hatful of bottoms and the halving system seriously jeopardised the bottom contour of the board and thus its performance.

Somewhere in the world there are a load of prototypes that sit folded in half, being used as tables and door stops. 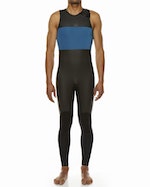 Long john wetsuits are a full length or steamer wetsuit with long legs, but no sleeves.

This was one of the first primary wetsuit designs in surfing and only had one serious flaw. That was that a fair proportion of your body’s heat is lost under your armpits, an area that wasn’t protected by the long john.

By simply adding sleeves, short or long, you doubled the effectiveness and warmth of the wetsuit. With the exception of triathletes and sailors, who needed the extra arm flexibility, but not the warmth, the Long John, rightfully, faded out of use.

That was until a recent love of surf retro has brought back them into fashion. While they may look cool, in a old school, singlefin, logger type of way, it doesn’t make up for the fact that in any cold water, you still freezing your arse off.

Taking the pedalo down to the next level, the Surf Bike allows you to twin your loves of cycling and surfing. Now that it’s something that has been missing in all our lives for some time.

Through vigorous pedalling, it is proposed that you can achieve speeds of up to 6 miles per hour.

Unfortunately that won’t be fast enough for you to outrun (or cycle) a six foot set that is bearing down on your lycra clad arse, but at only a thousand pounds per surf bike, who’s complaining?

Surfers envisage a paddle free existence where a simple push off the button can provide such levels of acceleration and drive that you suddenly turn from flailing kook into some type of Kelly Slater like demigod.

In practice, the sheer weight and cost of the engine’s weight has been prohibitive, but it is human nature that provides the greatest concern.

If, or when, motorised surfboards become as light and responsive as normal boards, there will be a significant advantage for those packing horsepower. The rules of the line-up will be rendered useless and anarchy will reign.

Oh and there will be a lot more fat surfers.

Surf Spot Or Shark Spot? 10 Sharkiest Places On The Planet

If sharks aren't your thing, don't go to these places...

Surf Spot Or Shark Spot? 10 Sharkiest Places On The Planet