Rotorua is a city right in the heart of New Zealand’s north island, and can be found on the southern shores of the lake of the same name.

The city has a population of around 57,800 and is roughly a two and a half hour drive down from Auckland – though you can get there on a bus from Auckland for as little as $1.

Rotorua is already an internationally renowned tourist hotspot – literally – thanks to the geothermal activity that heats up the water in the area.

This gives life to the geysers, hot mud pools and the spa industry in Rotorua, though unsurprisingly we’re more interested in the 100km of mountain bike trails in the Whakarewarewa Forest (locally known as the “Redwoods”).

We can’t go any further without at least acknowledging the smell in Rotorua though! As anyone who has been there before will tell you, the geothermal activity leaves a distinctive smell of sulphur in the air. There’s no two ways about it. The place smells of eggs.

But you get used to it in a day or two. And if you consider that it smells of eggs and still made the cut as our ‘Adventure Destination of the Week’, then just think how good the adventure must be? Seriously, Rotorua is a different level. 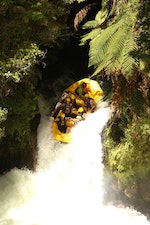 Anyway, once you’re away from the city centre and in the woods, the smell is gone, and what is left is fresh forest air and 100km of purpose-built trails that give you views all the way over Rotorua. Stop by Mountain Bike Rotorua and get a rental from local Tak Mutu and the awesome crew there, right on the edge of the trails.

You don’t have to climb much to get a lot of downhill back for your efforts in the Redwoods either – and due to forestry and various other factors, you’ll find yourself riding through what seems like four continents before you’ve reached the end of the day.

Expect to ride through dry and dusty, light and loamy and damp rocks and roots all in one outing. The soil is perfect for sculpting in the city as well, which is why it’s become one of the world’s hotspots for trail builders, and as a result, for riding a mountain bike in general. It even hosted the UCI Mountain Bike World Cup in 2006.

It’s also worth checking out Skyline Bike Park, where Crankworx Rotorua is held annually, and if you’re looking for something more scenery-based the Timber Trail is a cross-country route which will bring you across all sorts of suspension bridges and beautiful views.

It really is a mountain biking city. Even the mayor of Rotorua is famously a mountain biker, and as a result of all this, the community and facilities in the area are just as vibrant as the trails themselves.

If water is more your thing, then the Kaituna River is just a 15 minute drive north east of the city centre and offers class five (world class) whitewater kayaking and rafting through gorge-lined trails that’ll make you feel like you’re deep in the jungle.

There are some spectacular waterfalls on the route and it’s a great way to meet some fellow travellers as well.

Sudima Rotorua is a fantastic hotel right on the shores of Lake Rotorua. You can see the lake from many of the rooms and even if you can’t, it’s literally a 30 second walk from the front door to go and check out the steam rising over the water in the morning. Just don’t dive in. It can get hot!

We’re kind of cheating on our second option here, but Black Fern Lodge is quite genuinely one of the best places we’ve ever stayed – even though it’s outside of Rotorua, it’s accessible on the Timber Trail, and we stopped over here halfway into our journey on that trail.

Black Fern Lodge is pretty much a tiny, magical little lodge in the middle of nowhere, far away from society and with forest on every side. It even has its own private waterfall and river – complete with blue ducks. Yes, you read that right. This place is heaven.

One of our favourite stops in Rotorua was Okere Falls Store, where we grabbed lunch after a day in the Redwoods. The store caters to locals as well as tourists and was created as a base for the small community in the area, where locals can meet and treat themselves to an espresso or a boutique beer, where kids can play, and where groceries can be bought as well. It’s a great lunch spot and the garden area is a fantastic place to have lunch.

If you end up heading up to Skyline Bike Park then make sure that you eat at the Stratosfare Restaurant while you’re there. Set in the stars at the top of Mount Ngongotaha, the eating spot offers lunch or dinner with sensational views over the entire city – looking way out over Rotorua. The restaurant works with local farmers and growers to produce a mouth-watering menu and has a heap of awards to back up the point as well.

Brew Bar became our local when we were in Rotorua! It serves the best craft beer around as well as wine from New Zealand and really decent food as well. This is a bar created specifically to focus on beer and making sure the locals have quality on tap. Now they do – it’d be rude if you didn’t sample it!

If you’re after a cocktail, head to Pig & Whistle. It’s near Brew Bar and it’s the oldest bar in Rotorua dating all the way back to… 1993 (with architecture going back to the 1940s). Yeah, it’s a young country. Most post boxes in the UK are about three times that age, but nevertheless, this bar has good drinks and often live music.

What the Locals Say

“The trails are awesome in Rotorua but you can’t go past the people. I’ve been lucky enough to ride around the world and the fact that there’s very little ego here and so much whanaungatanga [a Maori term meaning ‘family kinship in the community’] makes our city so special.

“It’s something that’s rarely felt these days in cities and even less so in resort towns due to the transient nature of them.”

In Pursuit of Paradise | Is New Zealand the Adventure Capital of the World?

Adventure
We use cookies on our website to give you the most relevant experience by remembering your preferences and repeat visits. By clicking “Accept All”, you consent to the use of ALL the cookies. However, you may visit "Cookie Settings" to provide a controlled consent.
Cookie SettingsAccept All
Manage consent