Cycling across the green valleys of South Wales, surrounded by rolling hills covered by deep grass waving in the wind, it’s easy to forget that this used to be an industrial landscape filled with metal towers and rattling conveyor belts that dragged black gold out of the earth.

For the best part of two centuries coal mining was the business in Wales, with millions of tonnes produced each year. Coal barons were the rock stars of the day, providing fuel for the Industrial Revolution and making massive stacks of cash – like the first ever £1m cheque written at the Cardiff Coal Exchange back in the early 1900s.

“Just like the grass that’s slowly growing over old slag heaps, the valleys are finding new life as a cycle touring hotspot.”

Since then coal has fallen out of fashion thanks to Thatcherism, dwindling supplies and moves toward greener energy. The hard working communities that sprung up around the mines are now often struggling to make a living, but just like the grass that’s slowly growing over old slag heaps, the valleys are finding new life as a cycle touring hotspot, helped by various green initiatives.

UK charity Sustrans are the champions of environmentally-friendly travel. Aiming to make travel cheaper, healthier and cleaner they’ve helped set up the National Cycle Network, a series of cycle routes and trails that cover the whole of Britain – including hundreds of kilometres around the former industrial heartlands of the Welsh Valleys.

Heading to Blaenavon in the heart of coal country we hooked up with Sustrans guide Curtis Fields, a biking legend who loves nothing better than riding through the Welsh valleys that surround his home town of Oakdale. Kitted out with touring bikes from Drover Cycles we were ready for anything the valley trails could throw at us.

Our trip started easily enough with a short climb out of Blaenavon before joining up with one of the Sustrans trails that runs alongside the Pontypool and Blaenavon Railway, a heritage train line that still uses coal for its steam powered engines.

A long downhill stretch of trail led us along the path of a disused railway past old station platforms that 50 years earlier would have been filled with people and trains, but were now disappearing under a blanket of green. Slag heaps could also be spotted from the side of the trail, but you had to look carefully – these days they’re slowly blending into the landscape under crowns of grass and heather. 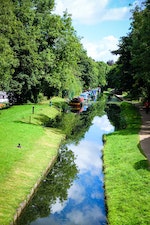 Threading through the bottom of Pontypool we linked up with the valleys canal system. These waterways were dug by hand and had transported everything through the valleys before coal fuelled trains took over and the canals became a dog walkers’ paradise. Tourist boats chugged through the water while old train bridges arced overhead, echoing the canals’ faded glory.

After a quick drink at the Pontymoile Basin Cafe, a snack-stop housed inside an old canal boat, we headed west, away from the canals. Riding past rugby fields, their fences lined with sports socks drying in the sun, through busy parks and brown stone terraces we were surrounded by the life of valley communities that had grown during the coal boom.

As we neared Six Bells along a tree lined path, a rusted metal figure poked through the canopy far above our heads. This was the Guardian of the Valleys, a Cor-Ten steel sculpture erected in 2011 to mark the Six Bells Colliery disaster that took the lives of 45 local miners. The 12m tall statue was a sharp reminder of the high price that was paid to keep the coal industry running. Yes, it had provided a living for many people, but coal mining had also claimed more than its fair share of lives down the years. 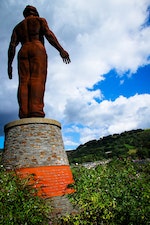 Climbing uphill to Nantyglo we visited the roundhouses built by the industrialist Bailey family in the early 1800s. The owners of the local iron works had a reputation for ruthlessness and wanted to protect themselves from their own workers who occasionally rose up, demanding better pay and conditions. Over a century later, similar scenes were repeated with Thatcher’s government and police playing the part of the ruthless industrialists during the miner’s strikes of 1984-85.

Further up the valley in Brymawr we circled the Parc Nant y Waun nature reserve which had taken former industrial land and turned it into and thriving habitat for birds and fish, proving yet again that with enough time the valleys could heal over the scars of their troubled industrial past.

Heading home we saw new marks in the landscape as road improvement works carved through the hillside. Leaving the diggers behind we cruised through the most beautiful section of the ride with a twisting downhill run back towards Blaenavon, weaving between sand coloured grasses, rich, green turf and splashes of purple heather. 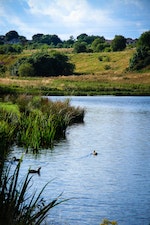 Finishing up with a well deserved pint in Blaenavon’s Lion Hotel, it was clear that we’d only just scratched the surface in of cycle touring in the Welsh valleys. With such a large network of cycle trails and routes the Sustrans crew have created a massive playground for cycle touring set against a back drop of history and natural beauty. Add to this events like the Tour Of Britain and the valleys’ thriving mountain bike and downhill scene, played out in stunning spots like Cwmcarn Forest, and it’s clear that touring and cycling as a whole are part of a greener revolution that’s using the region’s beautiful landscapes and fascinating history to bring new life to the valleys.

Accommodation:
We stayed at the four star Lion Hotel in Blaenavon (lionhotelblaenavon.co.uk)

Guides:
Curtis Fields is a volunteer guide for Sustrans. You can find out more about his travels around the valleys and hook up with him for a ride on his blog (bikewales.blogspot.co.uk)

Get The Routes:
Check out the The Valleys Tourism site (thevalleys.co.uk) for information on the area or head to the Sustrans website (sustrans.org.uk) to order maps of the National Cycle Network – either around the valleys or any other spot in the UK that takes your fancy.

Bike Rental:
We rented bikes from Drover Cycles (drovercycles.co.uk). With lightweight frames, forgiving 27 speed gearing and optional front suspension they’ll handle anything the valleys can throw at you.

Can Anyone Take Up Touring? Two First Timers Try to Ride to Denmark

Bicycle Kingdom | Why Is ‘The Island of Bikes’ Only Taking Up Cycling Now?

Having represented his country at the Rio Olympics, Wigan's finest talks about what's next

Heli Skiing | A Beginner’s Guide, And Why It’s Not Just For the Rich

For most people it's a novelty, for you it's the best place to sleep...

19 Signs You're Addicted To Camping And Sleeping Under The Stars

Too Haute To Handle? | We Took On The World’s Toughest Amateur Road Cycling Race

The Other Cape | Alternative Adventures in South Africa