Before I had kids I cycled every day. It was the same when I was pregnant, but once I’d had my eldest son I realised quite quickly that bikes and babies don’t mix. As for the first year or so you can’t really put them in a bike seat as their necks are too wobbly.

If you’re used to getting everywhere by bike it can be a frustrating time but before long you come out the other side and find yourself on family rides with your kids in tow, often quite literally in a trailer or on a tagalong attached to the back of your bike.

One of my favourite family bike breaks was last autumn when we went to the Isle of Wight on a red squirrel hunt. The boys had just turned three and five and though they were both riding by then, the youngest on a balance bike, they weren’t up to doing the 20 miles we’d planned for the first day, so my husband and I took one each in a trailer.

“We’re Going On A Squirrel Hunt,

We’re Going To See A Red One,

What A Beautiful Day…”

Cycling under a russet forest canopy, our soundtrack was the two of them chanting Michael Rosen’s We’re Going On A Bear Hunt, reworked to convey our squirrel-spotting mission. The eldest was singing sweetly, but the three year old, with no sense of volume control, was bellowing his words out like an 80s football hooligan.

It wouldn’t be the last time we’d wonder whether our noisy son could be deterring the very shy, bushy-tailed rodents we’d brought him here to see.

“The three year old, with no sense of volume control, was bellowing his words out like an 80s football hooligan.”

It was October half term and we’d come to the Isle of Wight to ride along the Red Squirrel Trail, a National Cycle coast-to-coast route, much of which runs along flat, disused railway tracks. These traffic-free sections especially appealed to us, as we wanted to enjoy a relaxed family cycle without a constant stream of cars whooshing past. 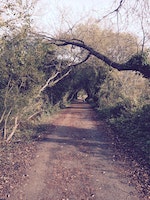 We also wanted a cycling break where we would ride enough miles to get the blood pumping but still have a fun adventure focus for the kids. For while ours like being in the trailer they will eventually get bored or fall asleep without a focus of some kind.

Searching for squirrels whose fur matched the colour of the autumn woodland (and the youngest’s hair) would make the experience a far more participatory one for them, we figured. The Isle of Wight is one of the few places in the UK where red squirrels haven’t been rendered extinct by their more hardcore grey cousins.

The tree cover at the start in Shanklin, on the south west coast of the island, was so dense it was almost dark. It felt like we were riding through a magical fairy forest, albeit one with a relatively new and smooth cycle path running straight through the middle.

“The Isle of Wight is one of the few places in the UK where red squirrels haven’t been rendered extinct by their more hardcore grey cousins.”

The leaves were golden with autumn in full swing but it was mild and the woods here definitely felt a couple of weeks behind the ones back home on the mainland. Some of the blackberries were even still edible, so we paused a few times early on to let the kids have a pick.

We had a slight road section, which cyclists without trailers could have avoided by navigating some steps, then found ourselves in a pretty sheep field for a grassy climb. It would have been fine without trailers but with them it certainly made us work, especially as the kids were helpfully heckling “Go Faster!!” as we climbed.

We met lots of other cyclists along the way including many families. As we reached what was one of my favourite sections, where the stunning chalk ridge first looms on the horizon in prime Area of Outstanding Natural Beauty territory, I pedalled next to a mother from Coventry. She’d brought her 15-year-old son and his non-cycling school friend along for the ride. The friend looked puffed but converted.

Some mud-splattered mountain bikers passed by telling us they were riding the Chalk Ridge Extreme, the toughest and steepest route on the island. My eldest son asked if he could do that one day.

We then rode through a farm, passing goats, pigs, cows, more sheep, and some llamas, which the kids loved. The scenery stayed beautiful and varied, from open fields and meadows to wetlands and woodland.

Soon it was time for lunch at the Pedallers Café, which as the name suggests is very welcoming to cyclists. I liked its Scandi-style wooden interior and the bike memorabilia on the walls. The kids liked the scary pumpkins on sticks ready to ward off spirits at Halloween. We fuelled up on soup and paninis then realised the boys were getting too energetic for the small space. They’d also just remembered we hadn’t seen any red squirrels yet.

On our way to the beach at Sandown we kept our eyes peeled through Alverstone and enjoyed a mini-detour to the ancient forest of Borthwood Corpse, which is meant to be a great place to spot red squirrels.

The woodland was lovely but fruitless. So we sped on to the sea and let them loose on the beach, where they ran about for an hour, while we enjoyed a drink and award-winning crab cake at the Beach Shack Cafe.

In the low autumnal light we enjoyed a lovely ride along the seafront, climbed the only serious hill of the day, and dropped the bikes back in Shanklin. Day one done, but the only red squirrel we’d seen was of the soft toy variety we’d brought from home.

Still, for our second day optimism levels were running high. From our Newport base we headed north following the path of the River Medina towards its mouth at Cowes. Locals had tipped us off to two sure-fire spots for squirrel sighting. Our first was some picnic benches in woodland by the river. We sat as quietly as the youngest could and scoured the trees for a while but saw nothing.

The estuarine landscape was a contrast to yesterday’s chalk ridge backdrop though pretty ancient woodlands still abounded. After Cowes, and a fun chain ferry ride and lunch stop, we decided to park up and take the kids deep into the forest for a walk at another guaranteed-sighting spot, apparently.

We played with sticks and made a den, then waited but still nothing. My husband and I joked that a squirrel heatmap of the forest would show them running in a mass away from our three-year-old’s shout-singing. I’d asked many locals if it was normal to cycle the Red Squirrel Trail and see not a single red squirrel and they all said no.

Though numbers fluctuate according to how successful the autumn seed crop is, it’s thought the Isle of Wight’s woodland can provide habitat for 3,500 red squirrels. Even other cyclists that we’d met along the way had seen them this trip.

Yet in spite of the lack of sightings we bombed back to Newport to drop our bikes and catch our ferry home with spirits surprisingly high. All that time amongst the awesome autumn leaves had served us well. The Japanese call it Shinrin-Yoku or forest bathing; in Japan it’s a recognised way to relax. We can definitely see why.

There were times in the early days of parenting when I’d look mournfully at my bike as I headed out with a buggy, but those months pass quickly and now coming out the other side I’m looking at years of family bike rides on the horizon. Red squirrel sightings notwithstanding I can honestly say the wait was worth it.

To read the rest of the November ‘Other’ Issue head here

For a detailed map of the Red Squirrel Trail head here

To keep things leisurely (and because we were pulling trailers) we decided to split the trail over two days, rather than doing the whole 32-mile route in one.

We stayed by the trail in Newport and for our first day we drove down to the seaside resort of Shanklin, on the south west coast of the island, to ride a 20-mile loop section.

We hired bikes directly on the trail from Route Fifty 7 Bike Hire, they had trailers for young children, children’s bikes and tandems, alongside a good range of adult bikes They advised us against using tagalongs (which they also didn’t stock) as some of the route was quite muddy, which held true along the way.

Ultra Running In Poland | How A 1,100km Run Gave These Runners A New Perspective

Adventure Cycling inspiration long form
We use cookies on our website to give you the most relevant experience by remembering your preferences and repeat visits. By clicking “Accept All”, you consent to the use of ALL the cookies. However, you may visit "Cookie Settings" to provide a controlled consent.
Cookie SettingsAccept All
Manage consent