Apart from being a tangerine-shaded arsehole and the next President of the United States of America to boot, just who or what exactly is Donald J. Trump? While he parades himself about the place as some sort of human-esque puppet, trying to form coherent sentences out of his 38 word vocabulary, and spouting unfiltered nonsense on Twitter; here at Mpora, we know the truth. Trump isn’t human.

That’s a pretty big claim, Mpora. Where’s your evidence? You can’t just go round town getting people all riled up on things, without having any factual evidence to back up your claims. That’s, well that’s…erm…that’s what Donald Trump does. And Mpora, many things to many different people though it may be, is not Donald Trump. We do “have the best words” though.

Anyway, below is a compiled gallery of photographic *evidence to support our ‘Donald Trump is actually an animal, pretending to be a human’ theory (*note to Trump’s lawyers, if you’re reading this, we’re not actually claiming any of this as legitimate evidence – it’s a joke). 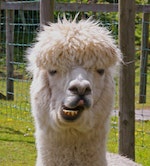 We’re throwing these ones in as a cheeky bonus.

Being A Beast: An Interview With Charles Foster, The Man Who Studied Badgers By Eating Worms

anger gallery laughter Listicle Nature surprise
We use cookies on our website to give you the most relevant experience by remembering your preferences and repeat visits. By clicking “Accept All”, you consent to the use of ALL the cookies. However, you may visit "Cookie Settings" to provide a controlled consent.
Cookie SettingsAccept All
Manage consent