Dom is six years-old and likes to draw. He even has his own Instagram account – the wonderfully named ‘thingsihavedrawn’ which showcases the wonderful works he’s put down on the page.

Dom’s dad is rather talented on a laptop and has transformed many of Dom’s drawings, which while endearing in ink could not quite be described as realism, into 3D-rendered productions, and they range from cute and comical to absolutely terrifying.

Dom has scribbled everything from elephants and giraffes to clown fish and humans, the latter of which will probably be keeping us up at night.

I have a lot of time for Dom’s artistic talent. If my dad had been able to 3D-render when I was young, there probably would’ve been a hefty bundle of three-headed dragons terrorising our local neighbourhood with rainbows coming out of their eyes. So yeah, who says realism is best?

Anyway… All credit to thingsihavedrawn! Give them a follow!

2. The Scariest Clown Fish Ever

3. Look What Alice Brought Back From Wonderland 4. The Cutest Butterfly in Existance 6. How the First Attempt at ‘Dolly the Sheep’ Turned Out 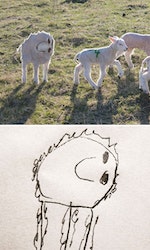 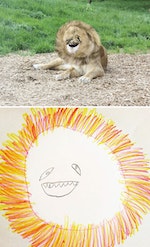 9. This Giraffe Who Proves You Can Fit in Anywhere 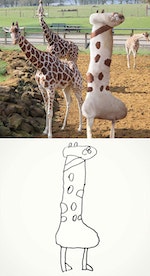 10. And The Elephant Who is Just Happy With Who He Is 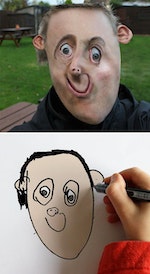 12. But This Space Dinosaur Though

14. This Lemur Who Doesn’t Get Out Often Unless It’s in Your Nightmares

15. This Zebra Who Knows Where You Live

Awesome Bike Tattoos That Every Cyclist Must See

anticipation laughter
We use cookies on our website to give you the most relevant experience by remembering your preferences and repeat visits. By clicking “Accept All”, you consent to the use of ALL the cookies. However, you may visit "Cookie Settings" to provide a controlled consent.
Cookie SettingsAccept All
Manage consent