At nine months old, Bengal tiger cub Aasha weighed only 30 pounds when she was supposed to weigh 120. She belonged to a travelling circus, where she was treated cruelly and picked on by a much bigger tiger. Suffering from ringworm, open wounds, and with bald spots and cracked skin visible all over body – the future looked bleak for Aasha. Incredibly bleak. Fortunately, Aasha was rescued by Vicky Keahey of the In-Sync Exotics Wildlife Rescue and Educational Center in 2011 and things have been looking up for her ever since.

Eight months of treatment baths, medication, and time spent with Keahey later and the transformation in Aasha’s appearance was nothing short of miraculous. Aasha is now shacked up with a much bigger tiger called Smuggler, and the pair are reported to get on like a house on fire. See below for images of the new, far healthier, Aasha. She’s now an animal that’s clearly loving life. A feel good story this one, we think you’ll agree. 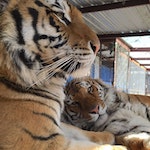 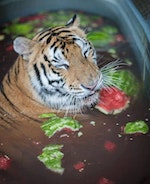 Welsh Village Under Threat From “Psychotic Sheep” High On Cannabis

anger article gallery sadness surprise
We use cookies on our website to give you the most relevant experience by remembering your preferences and repeat visits. By clicking “Accept All”, you consent to the use of ALL the cookies. However, you may visit "Cookie Settings" to provide a controlled consent.
Cookie SettingsAccept All
Manage consent