We love a good prank between friends, and this is one of the best we’ve seen in ages.

What would you do if you found out there was a wild animal in your house?This is what Justin Bogh found out this week when his wife Kayla Eby send him a picture of the ‘cute dog’ she had found outside and brought in to play with their four year old son.

As you can see from the photo, that ‘aint no dog, but a Coyote, a wild, usually vicious animal, closely related to the grey wolf. As you would expect, Bogh didn’t react particularly well.

Kayla told her worried husband the animal was “making this weird noise and kinda pacing” and he ordered her to take their son and “go into our room and close the door”, before she finally fessed up and revealed it was all in fact an elaborate (and hilarious) photoshop joke.

Check out their (pretty intense) text conversation below!!

The preschool teacher sent this message to her husband about finding a stray dog outside….

However it didn’t go down too well… 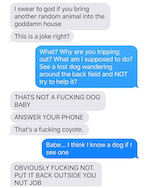 And things only got more tense from there…. 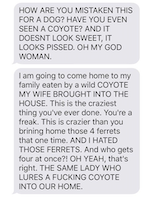 Things started getting worrying as the ‘coyote’ got restless… Luckily before her Husband burst into the house, she finally came clean Being A Beast: An Interview With Charles Foster, The Man Who Studied Badgers By Eating Worms

laughter
We use cookies on our website to give you the most relevant experience by remembering your preferences and repeat visits. By clicking “Accept All”, you consent to the use of ALL the cookies. However, you may visit "Cookie Settings" to provide a controlled consent.
Cookie SettingsAccept All
Manage consent