Everyone knows Mat Hoffman is awesome. The guy invented well over 100 BMX tricks and has been the spearhead of the riding scene for more than 20 years.

We were lucky enough to catch up with Mat when he was in the UK last month, so we’ll be dropping a feature-length interview with the iconic rider in the not to distant future. Stay tuned for that!

Until then though, here are 10 things your probably didn’t know about the legendary American…

1) Mat turned pro at 16 after winning the amateur comp at the 2-Hip King of Vert contest in 1989. He then won the pro contest an hour later

2) After landing the first ever flair in 1990, Mat gave the bike he used to a kid that had come to watch him from the Make A Wish Foundation

4) Mat was good friends with Evel Knievel, producing a tribute to the daredevil after he passed away 5) When Mat went to jump his 21ft ramp to set a new record air, he was towed by a motorbike at 50mph in order to get the speed he needed 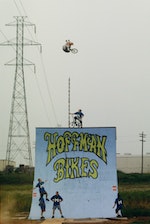 6) Mat went on to help organize the BMX events at the X-Games, but the rider got kicked out of the first ever edition of the action sports showdown – twice

8) Mat did a lot of work with the ‘Jackass’ gang, but some of the sketches he proposed were even too gnarly for them. One idea reportedly involved “sky-diving into a manmade bodily orifice on the ground”

9) Mat didn’t just ride on ramps – he has also taken his bike BASE jumping off Norwegian cliffs as high as 3,500ft

10) Mat has his own signature tattoo. The motto is ‘live life to be happy’ and he’s tattooed it on various friends including Travis Pastrana

This Back Garden Set Up Is Absolutely Insane! Is This BMX Paradise?!

These Are The Sickest BMX Lines You’ll See This Week

This lot couldn't be more Christmassy if they tried.

His reaction to waking up in the middle of a lake is absolutely priceless.

Watch: This Guy Float Into The Centre Of A Lake After Falling Victim To Hilarious Camping Prank

14 Shocking Images That Show How Polluted Our Oceans Are

Feeling pretty bad to be a human right now

Australian surf journalist reckons he's worked out where it's hiding

If this shocking footage doesn't make you look up now and then, nothing will.