An average BMX edit normally kicks off with a bit of a banger. Someone pulling a three over a massive drop or sticking something sick on a ridiculous rail.

There’s nothing average about ‘Above Below’ though. And it’s not just an edit either.

The feature is the first full-length BMX film to drop from Monster Energy, and it’s broken up into two main segments. ‘Above’ is a showcase of insane street riding from the superstar cast, and ‘Below’ is the behind-the-scenes documentary that sets the film apart.

One of the first visuals in ‘Below’ shows English star Dan Lacey struggling after an unseen fall, writhing in pain and needing helped up and carried away.

The shot is a fitting introduction to a feature that shows the agony and aggravation that comes before the jubilation of nailing a trick, from bribing security guards to spending five frustrating hours at a singular spot.

“It can be rough to film but that bit at the end, the light at the end of the tunnel, makes it all worthwhile,” said Dan.

“You might spend a week somewhere and come back with five seconds of footage. You can go through all this shit while you’re riding though and still come away with a feeling of pure euphoria, because at the end of the day you’ve accomplished something.”

Liverpudlian rider Ben Lewis is another of the main cast. The BMXer takes some big hits in the film, admitting he spent four hours at one spot attempting to nail a trick, but agrees that the end result is more than worth it, and that capturing that journey was what ‘Above Below’ was all about.

He said: “To make a video isn’t just point and click. You take each trick as it comes, and it might take three or four hours to get it or you might get kicked out by security four or five times. It’s not as simple as many people might think.”

“You can end up being somewhere for a week and come back with five seconds of footage,” adds Dan. “That happens more often than not, and being able to show that in a behind-the-scenes video that isn’t just a ‘making of’ feature lets everyone get a bit more of a feel for that.”

With such a big focus on the bangs behind the bangers then, there was always bound to be two main topics that would be called into question: big bails and security guards.

The movie has a chapter on each accordingly, and it was interesting to hear the different takes the riders had on each drawback. When it comes to crashing, Ben takes a patient approach, admitting that he likes a bail early to push the rest of the session forwards.

“It’s always good to just have a bit of crash and get the fire going,” he says. “It’s good to get one out of the way. Once you’ve got it over and done with, you don’t care so much any more!”

Mr. Lacey meanwhile is famous for his rather more fiery temper and vocal venting. There’s a montage about a minute long in the film made up purely of clips of Dan shouting, swearing and chucking his bike around, set to a comically buoyant saxophone backtrack.

It makes for an entertaining watch, and the man himself is more than open about the fact that he likes a good shout every now and then.

He contemplates with a laugh, “It’s not the crashing aspect that I don’t like. I’ve got a bit of a short fuse as it is. A lot of people are aware of that. I’m aware of that. It’s fine. I’m over it!

“I’ll get to a stage in filming though where some people would just stop, but there’s always a bit of me that’s like ‘don’t stop. You’ve gone this long already’, and that can turn into you trying the same thing you’ve been trying for so much longer. That’s when I snap.

“I think I spent about five hours once at the same spot and that was definitely one of those times that I was losing my shit a little bit.

“The crashing side of it is a lot of pain, but you get it out of the way and it’s not so bad. It’s when you’re stuck in a vortex trying something that isn’t happening – that’s when I get frustrated!”

While the bails are a necessary evil of eventual success though, arguably more irritating is the security operating in the area, who can shut you down without warning.

“You can pay certain security guards off, and others will tell you when they’re clocking off…”

Every bail takes you one step closer to nailing a trick, but if a security guard or policeman tells you to move on three hours into a shoot, your rhythm is shot, your focus is broken and your moment is gone.

So how do you handle that ultimate frustration? Good old-fashioned bribery, apparently, works more often than not.

“You can pay certain security guards off, and others will tell you when they’re clocking off as well,” says Dan casually, with Ben nodding by his side. Standard procedure it seems.

“Most security guards don’t care as long as they’re not on the clock. They’ll say ‘as soon as it’s off my watch you can do what you fucking like!’. The whole security situation definitely does loom over you though.”

Ben continued: “Yeah, you might have been trying something for ages and you might’ve been close, but when you see the police or the security coming you know you’ve only got one chance left.

“You give it 250 percent when that happens and more often than not it works on that go. When it doesn’t though, it tends to crash really fucking badly!” 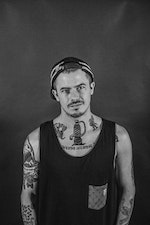 The pains behind the perfection are only half of the story though. The Monster production captures all the annoyances that you don’t see in your every day edit, but rather importantly, it also captures some absolute hammers and a truckload of ridiculous riding as well.

We’re talking giant wall rides, larger than life threes and ridiculously complex rail work. The variety in styles throughout ‘Above’ makes each riders part seem even more impressive, and you appreciate it that much more when you’ve seen the madness behind the magic as well.

“I think the reason we work well as a crew is because everyone has got their own specialities,” added Ben. “Everyone hits a different spot in a different way.”

Dan was quick to agree: “Yeah, when it comes to style, it’s not even remotely close. There are no similarities in our riding.

“Everybody does their own thing and it’s cool that that individuality comes through in BMX because you can really express yourself. It’s not an expression of what you do, it’s an expression of you.”

And up next for the guys? For Dan, it’s looking forward to getting back on the road next year for the Street Series, and for Ben it’s much the same, but first? Well… “I’m going to take two months to lie the fuck down! It’s been a long year!”

He’s certainly earned it too, as have all the cast from ‘Above Below’. The film was put together in seven cities across six different countries, in between competitions and filming for other projects.

That certainly sounds like a lot of work, and after watching the final thing, you do realise the amount of time and effort that these guys put in. You also realise, however, that every single minute was absolutely worthwhile.

‘Above Below’ drops on iTunes on 14 December at this link. Make sure you check it out!

Daredevil drop-ins and collosal kickers: this 'dark woods' project is certainly one of a kind

One big event, four top BMX teams, and some of the most creative riding we've ever seen...

Ever seen a mini-BMX in the skate park? It can be surprisingly cool...

Daredevil drop-ins and collosal kickers: this 'dark woods' project is certainly one of a kind

One big event, four top BMX teams, and some of the most creative riding we've ever seen...

Ever seen a mini-BMX in the skate park? It can be surprisingly cool...

The 'Dirt Rider of the Year' Just Dropped This Sick BMX Edit... And It'll Get You Super Stoked To Ride

Matt Priest and Source BMX return with 'Texas and Back Again', and it's an absolute must watch

The 'Dirt Rider of the Year' Just Dropped This Sick BMX Edit... And It'll Get You Super Stoked To Ride