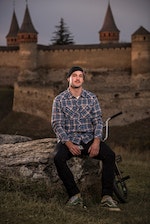 Vasya Lukyanenko is a BMX rider from Ukraine. Vasya recently took to the road in his home country to ride some stunning spots, and the result was not only a trip to remember, but some stunning photographs from around Western Ukraine.

The idea for our trip came up at the beginning of the year, when I watched a video that showed a lot of the attractions in Western Ukraine and what makes us proud of the country.

I thought it would be interesting to do a project that brought BMX to some significant places in the country. I put together a list of eight places where no one has ever ridden in Ukraine. In the list were four castles, a monument to the dead loop by Pyotr Nesterov [an aerobatic flight move first completed by the Ukrainian pilot] and an arch-bridge in the village of Plebanovka as well as a couple other stops.

All the spots and the idea of riding them got the interest of photographer Sergey Ilyin and we started preparation, eventually setting off.

I decided to build a small kicker to use in spot which were not really rideable, which would allow us to ride on the flat. We built it together with Sergei at his home a few days before departure on 25 October.

We went to the first location, which was near the quarry Korostyshiv but we didn’t find any amazing places to ride and decided to move on.

The second stop became the city Novograd Volyn and a local landmark – the remains of the fortress Zvyagel. The spot wasn’t particularly rich in possibilities. We took a few tricks on the rails and left when the rain started and meant we had to go further.

We moved in the direction of the city of Rivne. After spending the night on the highway, in the morning we decided to call on the basalt quarry, which was great for Sergey. We arrived at the place and were completely struck by the size and beauty. It would’ve made a great park – it was not unlike the Grand Canyon! 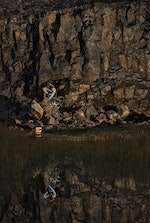 We have traveled all of our career in that area, and though we only had a few hours but we took a few good shots.

The main problem or difficulty was that we didn’t check locations before filming and we did not know what spots we’d be able to ride. And so we spent a lot of time searching for spots and the road to them. But that was also a plus, because we didn’t know what was awaiting us at our locations.

Radar Pamir we postponed for later, because it was quite far from our target cities. After the quarry, we went in the direction of Lviv, where we spent the night. In the morning we went to the Loop. At this spot we went to work, we tried to dig a huge pit. We spent two hours digging the ditch and left this venture. We squeezed out of it what we could, got some action and lifestyle shots and drove on. 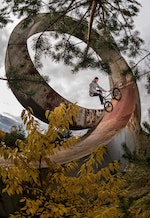 Next was an abandoned castle Pidhirtsi. There we were shooting in the dark.

The next target was an arched bridge in the village of Plebanovka. But there are three villages with the same name in Ukraine as it turned out and it got a little complicated!

Next was Kamenetz-Podolsk and the local fortress. The weather was great and we took further action shots of a beautiful castle.

A lot of time was spent on the placement of the equipment, collecting, moving and shooting itself usually takes up to an hour or two. The next day we went in the side of Kiev and stopped on the way to another arch bridge in Novograd Volynsk but it wasn’t possible to ride. We hit another castle as well though – Radomysl.

In total we had five days, five spots, 2,200 km, three people, one BMX and a large amount of equipment.

awe
We use cookies on our website to give you the most relevant experience by remembering your preferences and repeat visits. By clicking “Accept All”, you consent to the use of ALL the cookies. However, you may visit "Cookie Settings" to provide a controlled consent.
Cookie SettingsAccept All
Manage consent