The 2016 Olympics in Rio de Janeiro will have seemed like a long time coming for Team GB BMX racing star Liam Phillips.

It was four years ago now that Phillips crashed out in the medal race at the Olympic Games in London, having shocked many by reaching the finals at all just 10 weeks after breaking his collarbone. A lot has happened since then.

“That race has been the most significant in my whole career even though it was only six seconds long,” he told us.

“From that race I got the confidence to win the World Championships the following year. I was capable of winning that medal race. I just never knew it at the time.”

It certainly takes a strong mind to keep the head held high having had a shot at home glory ripped away by misfortune. And Liam Phillips clearly has a strong mind. Even before those games in London, coming into the biggest platform on the planet on the back of a brutal injury that had put him off the bike for five weeks and required another five on the mend, Liam was very openly targeting gold in London.

He continued: “It was never in my mind that I wouldn’t be able to compete. I was still in good physical shape going into London all things considered.

“I’ve said on numerous occasions that I was going in to win it. Of course I was. I know looking back that I had the physical form to win that race. That was the plan for years leading up to that event.

“If I do everything I can away from the track coming up to competitions and perform to my capabilities, then I’m better than anybody else in the world…”

“How many times do you watch a tennis match where someone is two sets up and just about to cross the finish line but doesn’t do it? Until you’ve actually crossed that finish line in a big race or a world title or a world cup and had that experience…

It’s hard to hear Phillips’ reference to tennis without recalling a tearful Andy Murray losing out to Roger Federer at Wimbledon in 2012. The link seems apt too, given that just as Andy bounced back from that loss with wins at the Olympics and Wimbledon the following year, disappointment in London proved a springboard for the English BMXer.

Liam went on to win the World Championships, his first major success, in 2013. He became the first ever British male to win the UCI BMX Supercross World Cup in 2014 – a crown given to the best overall competitor across the five World Cup races each year – and followed that up by becoming the first man in history to defend that title twelve months later.

After winning his home world cup event in Manchester earlier this year, where fellow British rider Kyle Evans claimed second place, he’s on track to make it three overalls in a row as well.

Liam will be looking to add the one missing piece of silverware to his trophy cabinet long before the world cup series wraps in October though – with an Olympic medal, preferably gold, at the Rio Games. He’s confident that despite the increasing weight of expectation that comes with his improved resume, he’ll be able to do exactly that.

“Of course there’s pressure,” he says. “There pressure every time I race, because I’ve won the rainbow jersey and numerous World Cups and I’m the first person ever to win three World Cups in a season, which I’m extremely proud of.

“So there is pressure to deliver but no more than I put on myself, and all of those little victories that I’ve put up along the way just add to my confidence.

“I don’t want to sound cocky or arrogant because that’s not me, but I do have the feeling that if I do everything I can away from the track coming up to competitions and perform to my capabilities, then I’m better than anybody else in the world. I think that’s common with all athletes.”

It’s a bold statement from Liam but one comfortably backed up by his race results since London. In many ways, winning an Olympic gold at this point would bring the rider’s career full circle.

Liam’s career really got going when he was accepted onto the Olympic Academy Programme way back in 2005, a sprint-centred set up inspired by the British Cycling endurance academy which produced Geraint Thomas and Mark Cavendish.

The BMXer trained and lived alongside Olympic track cyclists Matt Crampton and now three-time gold medallist Jason Kenny in a flat Manchester at that time, though he does note that the governing body didn’t quite understand the demands of BMX when they started.

“I think British Cycling overlooked how important the technical demands of our sport were at the time,” he admits. “They thought that as long as you had a big enough engine that you could just get into the races and compete but we found out pretty quickly that that wasn’t the case.

“Although the other guys were training for track, it was still the same philosophy, but they didn’t actually have a BMX track in Manchester until 2008, before the Beijing Olympics. So I had to live there for almost 18 months without a track!

“That was how it all started and since then we had a track built outdoors in Manchester and now we’ve got the only permanent indoor facility in the world – an absolute world leading facility that’s changed the face of our programme beyond recognition.”

Phillips was lucky enough to go to those Games in Beijing at just 19 years old. He knows he was there just to get experience for the future, but he feels like he got exactly that – and more.

Liam shared his Olympic debut with the debut of BMX racing as a sport at the Games. He would be the first rider out for his time trial in China in 2008, and subsequently, the first rider to ever compete in his sport of choice at the Olympics Games.

“There was a vast amount of data that showed that most athletes who win medals at Olympic Games have already competed at an Olympics before – something like 82 percent of athletes that win medals,” he remembers.

“British Cycling basically believed in my abilities and sent me to that event solely to gain experience for London, really. I was the first guy to come in off the ramp and that is pretty special.

“There’s a huge amount to learn and benefit from having already having been to a Games. Even the basic stuff like eating your dinner. Being polite as possible, it’s like a freak show; you’ve got really broad people, skinny people, wide shot-putters and everything in-between in this huge dining hall. You can get overawed by the whole occasion.”

The fact that the experience in Beijing did indeed prepare Liam perfectly for the 2012 Games is a fact that would ultimately just add further to the disappointment of the injury and the moment when he unclipped and lost out in the final.

But he still looks back on London with fond memories, saying: “I just felt so humbled by the whole experience. I couldn’t believe that 6,000 people, the vast majority of whom weren’t anything to do with BMX, had spent their hard earned money watching a sport that isn’t a traditional Olympic sport and was still new to the Olympics. That for me was crazy.

“David Beckham and his kids and the Prime Minister were all there on finals day, and it was a surreal moment. It’s not what usually happens at BMX races.

“I can’t blame anyone else if I go out there and underperform; it all rests on me…”

“If I could race that whole competition again tomorrow, I would do it in a heartbeat. I don’t think there will ever be a competition that will come close to that. It was just amazing.”

Though, we’re sure that opinion might change if Liam were to win gold in Brazil this summer. From a young kid winning European titles at 10 years old to a world champion and record-breaking world cup winner, there’s only one box left to tick now for the 27 year old.

Anything can happen on the day – Liam knows that more than most. But he’s confident and open about his desire to win, and about the impact a win could have on the future of the sport in Great Britain as well.

“What I love about BMX is the fact that everything rests on my shoulders,” he says. “I can’t blame anyone else if I go out there and underperform; it all rests on me. 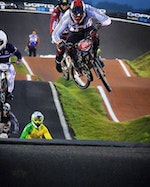 “On a personal level, obviously it would be massive, but then also from a sporting perspective, certainly in this country and in the way cycling has evolved over the past few years, it would obviously mean a huge amount.

“I’ve always tried to expose BMX to wider audience as best I can and I’ve had some great opportunities working with some of the Team GB partners who have really taken a punt on BMX.

“If there are ever opportunities to push BMX to a wider audience then that’s something I feel really passionate about.”

It’s unlikely he’ll ever get a better chance to do that, or to win an Olympic gold medal, than at the Rio de Janeiro Games this summer.

BMX Racing: The Basic Rules, History, Olympics and Everything You Need to Know

What Are The Rules of BMX Racing? What is a BMX Track? All the Basics Ahead of the 2016 Olympics…

anticipation BMX Olympics 2016 Interview Liam Phillips longform olympics Olympics 2016
We use cookies on our website to give you the most relevant experience by remembering your preferences and repeat visits. By clicking “Accept All”, you consent to the use of ALL the cookies. However, you may visit "Cookie Settings" to provide a controlled consent.
Cookie SettingsAccept All
Manage consent