So, you’re after a short history of BMX? Well you’ve come to the right place. And the first thing you need to know is that when we’re talking about BMX bikes, the BMX stands for ‘Bicycle Motocross’. So that’s that Sorted.

Of course, endeavouring to give a short history of BMX is a rather bold undertaking. The sport has so many disciplines, so many off-shoots, so many key figures and key events that have lead it to be where it is today.

But we’re guessing that if you’re here, what you’re after is the framework and origin story behind the sport you love.

So, we’ve lined up exactly that; partly because it gives you all the info you need about the birth of BMX in one easily digestible article, and partly because ‘a long history of BMX’ probably would’ve ended up surpassing the Bible on word count.

BMX is a sport built on the premise of racing fast, off-road tracks on a bicycle smaller and lighter than a road bike or mountain bike.

BMX bikes were designed especially for riding on dirt, though these days you can of course buy different kinds of bikes built for different branches of the sport. Click here for a guide to buying your first BMX bike.

The sport may have been born on a love of racing, but from that culture spawned all sorts of other disciplines under the banner of ‘freestyle’ – the likes of street riding, park and vert riding, dirt riding and flatland.

Dirt, vert and street BMX bikes are all similar in set up, with 20-inch wheels and comparable measurements on most parts, while flatland bikes are geometrically different.

Park or vert bikes are made as light as possible so they can fly high. They’re lighter than street bikes and have a thinner tread than dirt bikes, sometimes fixed with breaks and sometimes not.

Street BMX bikes often have just one singular break or none at all, so as to keep the ride as light as possible and allow for more manoeuvrability with the handlebars. They’ll often feature metal pegs, and normally they’ll be a bit heavier than your standard freestyle bike to allow it to take more of a beating.

We’ll touch on racing bikes and run through a brief overview of the birth of both racing and freestyle in just two ticks, but first here are a few key dates that allowed the sport to thrive and rise to the status it holds today.

A Short Timeline of BMX Progression

It’s often said that 1972 motorcycle documentary ‘On Any Sunday’ was one of the biggest inspirations for the BMX scene. It’s certainly an important point in the history of BMX.

The movie showed kids going off-road on their Schwinn Sting-Ray bikes in the opening scene, the same model of bike which was so popular in the early BMX scene because of its ease of customisation.

But the roots of the scene can be traced back to well before that, some arguing that the true origins of BMX come from the Netherlands, where the sport of motocross was invented in the 1950s. And wherever you’ve got adults riding motorbikes on dirt, you’ve probably got kids riding their bikes behind them, as shown in this footage from 1957…

Likewise in America, Schwinn BMX catalogs showed BMX riders on dirt tracks in the mid 1960s. But while ‘On Any Sunday’ might not have been the starting point, it was certainly one hell of a catalyst.

The BMX scene has always been inspired by motocross. It’s in the name. Some kids might not have been able to ride motocross, whether due to safety fears from their parents or the money involved, but either way it lead to the development of dirt courses for Bicycle Motocross, and the beginnings of one of the world’s greatest sports.

While ‘On Any Sunday’ might not have been the starting point, it was certainly one hell of a catalyst…

Anyway, the scene kicked off on dirt tracks in southern California in the 60s and 70s and quickly grew into a hugely popular sport, with basic BMX tricks becoming established, bikes soon being made custom and George E. Esser set up the non-profit BMX National Bicycle League in Florida in 1974.

The American Bicycle Associate (ABA) became the national body for the sport in 1977 and proved hugely important in organising the sport, and in 1981, the International BMX Federation was founded, giving way for the first world championships to be held in 1982.

BMX became a part of the Union Cycliste Internationale, or UCI, the world governing body for sports cycling, in 1993, and since the sport has cemented its status through the likes of the X Games and indeed the Olympics, where BMX racing has been a medal sport since Beijing 2008.

A Short History of BMX Racing

BMX Racing was really where it all got started on BMX bikes. The influence of motocross is still clear to see to this day, with the specially-built, off-road, single-lap race tracks featuring a start gate from which eight riders are let loose to take on dirt rollers, jumps and wide corners before they reach the finish line. Even the racing gear is heavily inspired by motocross.

Racing BMXs have a larger sprocket than other BMX bikes, creating a higher gear ratio and allowing the rider to pedal harder and subsequently gain more speed. Unlike some other BMXs, racing bikes will almost always have breaks.

Over that one summer where ‘On Any Sunday’ hit the big screen in 1971, a sport was accidentally born through demand and improvisation, and it grabbed the attention and love of so many people that it stuck around.

The success of the ABA played a big part in making sure this was the case, organising the first national tour, putting the first money up for grabs for professions, setting out a ranked and layered competitive system, membership and points systems and hosting events to cover all abilities and ages.

There were dips in certain stages. When freestyle took over from racing in the 80s, the sport declined, and suffered further with the mountain biking boom of the 1990s, but through a passionate core of riders who kept the scene thriving, it was able to make a return, and was served the ultimate acknowledgement in the world of sport when it was awarded Olympic status in 2003.

Since BMX racing was introduced in the 2008 games at Beijing, five years later, there have been two medal contests, with Latvian Maris Strombergs and French Anne-Caroline Chausson taking the wins in China and Stromsbergs retaining the gold for London 2012 while Colombian Mariana Pajon took the women’s crown.

A Short History of Freestyle BMX 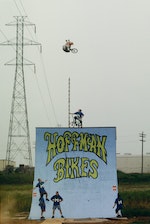 The freestyle BMX scene really kicked off in the mid-1970s, when people took their rides along to concrete skate parks and reservoir channels in San Diego in California and started to shred.

Basically, they realised that they were having a damn good time and looking pretty damn cool. It was bound to take off.

Way back in 1976, Bob Haro and John Swanguen were riding in skateparks and already inventing new tricks on the streets. Haro soon got involved at BMX Action Magazine where he met R.L Osborn, which lead to the formation of the first freestyle BMX team, the BMX Action Trick Team, in 1979.

The team was created when Osborn and Haro were asked to do a BMX demonstration at a motocross race, and while that particular show would never go through, it laid the future for the trick team and many others like it.

Members of the Action Trick Team came and went in its seven year history, though R.L Osborn was ever-present. After Haro had left in the early 80s, the team included the ever-popular Mike Buff for a time, Pat Romano, who brought fixed gear and fork pegs to BMX, and finally Ron Wilton.

As the scene grew, it became much more than just a sideshow to motocross or skateboarding shows, too, thanks to the influence of riders like Mat Hoffman, Dennis McCoy and Dave Mirra, nailing new tricks, rewriting the book and proving beyond doubt that this was no mere ‘trick’ hobby, but a sport with some severe risks, a whole lot of originality and an abundance of skill required.

Magazines devoted purely to freestyle began to emerge as skate parks with BMX-only days became a regular occurrence, and BMX-specific parts and gear became common to see in any bike shop.

After booming for over 10 years though, the freestyle scene became to decline in popularity, in much the same manner as the racing scene had before it.

Big companies pulled out and rider-owned companies began to take their place, teams became a thing of the past, few professionals remained committed as the money disappeared, and many of the magazines that had sprung up in past years folded for good…

This lead to a culture where the scene was formed around the riders, who made the tricks, owned the companies, and not only progressed the sport, but at its time of decline, kept the sport alive altogether when it could’ve so easily faded away.

Mat Hoffman is a prime example of this. ‘The Condor’ advanced the sport like none other, nailing tricks like the 900 as early as 1990, founding Hoffman Bikes during the BMX recession and even creating his own touring team which played almost 100 shows a year even while the sport was dwindling from the public eye.

Mat guided the sport through the dark days and continued to hit new heights – often literally – through to a time when it would regain popularity.

That would be in 1995, when the X-Games got started and brought the sport back to the mainstream and on the up, where it’s been ever since.

The money returned, the scene began to boom again and the rider-owned companies and magazines made and continue to make sure that the scene remains true to its origins of freedom and creativity, in every branch of the sport.

These women are more badass than you

Did you know you can now do dog yoga and anti-gravity yoga?

Log Fires Are More Dangerous Than Traffic Pollution, According To This Norwegian Study

Could This Spell The End Of Cosy Open Fires?

Log Fires Are More Dangerous Than Traffic Pollution, According To This Norwegian Study

Forget Supermarkets, My Boyfriend Hits The Tarmac When It’s Time For Tea. Here's Why…

This company helps you channel your inner Tom Sawyer

Fancy An Old-School Adventure? How About Sailing Away On A Timber Raft In Sweden...