You may not know what the ’Pillars of Creation’ are, but you have to admit that they both sound and look incredibly epic.

The Pillars are situated 6,500 light-years away – which, to put to it in perspective, is also approximately how far away work feels when you wake up hungover on a Monday morning.

To be specific, they are in area M16 of the wonderfully named Eagle Nebula, which is pretty special in itself… 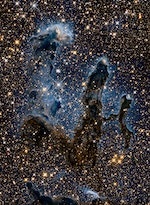 The Pillars were given their name after being captured on camera by the Hubble Telescope in 1995, with the ‘creation’ part of their title coming from the fact that the gas pictured is actually in the process of creating new stars.

The image is also rumoured to bare a stunning similarity to what you would see should you look at some meerkats after taking LSD. Or at least we certainly imagine as much.

Anyway, to mark 20 years since the original photograph was first taken – and in celebration of the Hubble’s 25-year anniversary – the telescope revisited the surreal site for another little photo shoot.

The new image is even more stunning than the original, adding extra detail and highlighting the miniscule changes that have taken place in the past 20 years… despite the fact that some of the gas pillars have travelled over 60 billion miles since last being photographed.

This Guy Uncorked A Champagne Bottle… With A .50 Caliber Sniper Rifle

Houston, We Have a Problem | Meet the Man Making Spacesuits to Stop The Growth of Astronauts' Spines in Outer Space

“If I live a full life, there’ll still only be three chances to try and chase a photograph like this..."