It’s still early in the morning on a cloudless March day. The spring sunshine is hot enough to dissipate the last vestiges of chill from the air and cause beads of sweat to break out on my forehead. The sun is a welcome presence after a surprisingly long, cold and wet winter – it had snowed in the capital for the first time in living memory.

Standing on the brow of an ochre hill, my hiking companion Francis and I stop to take in the spectacular, untrammelled vista. The valleys below us are peppered with early season flowers. To our right the coastal desert plains stretch off into the distance, while to our left the uplands march towards the border with Tunisia.

My eyes are caught by an object on the ground not 50 metres away. Long, metallic and cylindrical, it seems incongruous in the setting. We wander over to investigate, suspicions aroused. And there, picked out in green along the side of the one metre long tube, are a series of seemingly random numbers and letters. Three of them stand out. SAM. Surface to Air Missile.

Want to spice up your hike by seeking out charred sections of missile, or jumping into a burnt-out Soviet-era tank?

Welcome to Libya. The year is 2012 and the signs of the previous year’s savage revolution-cum-civil war are there for all to see.

The conflict may have officially ended on October 23 2011, three days after Colonel Gaddafi’s fateful capture and summary execution near his hometown of Sirte, but the continued fighting, tribal divisions and sheer quantity of freely available weapons continue to make Libya a dangerous place to visit, let alone go rambling, without a guide, in the hills.

We’re in the Nafusa Mountains in the west of Libya, home to the country’s ethnic Berber population and scene of some of the fiercest fighting during the struggle to get rid of Gaddafi.

These aren’t the mightiest peaks in the world, topping out at 968m, but what they lack in height they make up for in ease of access (Tripoli, Libya’s capital, is only a few hour’s drive away) unspoilt natural beauty and fascinating history, both ancient and modern. 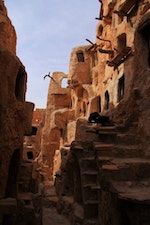 The Nafusa Mountains were a major front during the Libyan civil war, an island of rebel-held territory in the Gaddafi-controlled west of the country for much of the conflict, and evidence of the fighting is everywhere.

Tired of beautiful scenery? Want to spice up your hike by seeking out charred sections of missile, or jumping into a burnt-out Soviet-era tank? They’re all over the place, complete with on-board instructions in Russian (which obviously didn’t help the ill-fated Arabic-speaking occupants).

And it’s not just ex-fighters you see evidence of here either. As you hike, you can wave to your friendly local militias as they drive by in their “technicals”, converted pick-ups with machine guns and missile launchers mounted on the back.

Yes, all this and more is possible in Libya.

There is however more to the country than just the remnants of the recent conflict though. The Nafusa Mountains are surprisingly beautiful. As Francis and I leave the expended missile case behind us, we’re drawn towards the ruins of a centuries-old fort perched precipitously on a hilltop above us.

This is a region of the country with an ancient history, predating the arrival of the Greeks, Romans and Arabs. The Berbers, the original inhabitants of North Africa, speak their own language, Tamazight, and are immensely proud of their culture.

The fort, now utterly exposed to the elements, is sited above the main access route to the mountains and offers a commanding view of the plains below. They may have been ruthlessly suppressed under Gaddafi, but you can understand why the people here have survived countless invasions.

At that moment Adel, a friend who in pre-revolution times worked as a tour guide, is sitting at the wheel of his car far down in the valley below us. All of a sudden he begins shouting and gesticulating for us to come back. We figure it’s probably best not to argue, given where we are and what we’ve just stumbled across.

We hop in and Adel drives off at a sedate pace, as the road begins to wind its way down the escarpment. It seems there’s no imminent danger.

“Adel, what happened? Are we in trouble?”

“No no, I think maybe you get tired of walking so I drive you instead. Where you want to go?”

“We want to walk those hills over there.”

“Why walk? I have car, it is much easier”

For all the beauty of the local scenery (with or without the added attraction of unexploded bombs) hiking has still yet to really take off in the Middle East.

In fairness, when you think about it logically it is a bit strange.

An Arab friend of mine once described it as “walking uphill for an extended period of time.” Sort of like Ron Burgundy’s definition of yogging. Libyans certainly just don’t really seem to get it.

Libyans don’t really seem to get hiking. An arab friend once described it as “walking uphill for an extended period of time”.

Barring a big influx of foreign ramblers, that fact is unlikely to change. Unfortunately, that influx of Western hiking evangelists doesn’t look like it will be happening any time soon.

Speaking to Adel more recently, it’s clear that the situation in Libya in 2014 is still far from ideal. “It is bad,” he says. “There is very little tourism for the time being, and there will probably be little to none for the next few years. We need security to improve and visitors will start to return.”

Which is a real shame, as Libya is a country perfect for yomping around. Admittedly, it is not the easiest place to get to.

The Libyan authorities have not yet started issuing tourist visas, and the regular ones don’t come cheap. But if you persevere you will be rewarded with one of the most unforgettable travel experiences imaginable.

Apart from the Nafusa Mountains, the west of the country boasts the mesmerising UNESCO World Heritage sites of Leptis Magna and Sabratha.

Important coastal trading cities in Roman times, both ruins are so spectacular that if they were on the other shore of the Mediterranean – in say Italy, Greece or Turkey – they would be swarming with millions of visitors annually.

Here though, you get to wander their streets, swim through millennia-old ruins and strut on the stages of their ancient theatres without seeing another soul.

The south of Libya meanwhile is home to the vast expanse of the Sahara desert, crisscrossed by ancient trading routes and pitted with oases and mountain outcrops.

It’s here that you’ll find the Acacus Mountains, home to cave paintings dating from 12,000 BC; the Ubari Lakes (picture the most beautiful oasis imaginable and you’re almost there) and the timeless, magical desert trading towns of Ghadames and Ghat.

In the east of the country you have the Jebel Akhdar, or Green Mountains, home to waterfalls, forests, meadows and the breath-taking Ancient Greek ruins of Cyrene, another UNESCO World Heritage site (Libya has five).

The Green Mountains also sheltered Omar Mokhtar, who led the resistance to Italy’s colonial soldiers and Mussolini’s Fascists for over twenty years.

I found myself in the Green Mountains in July 2011. I had escaped the chaos of Benghazi, self-styled ‘cradle of the revolution’, to spend the day with friends exploring the ruins of Cyrene and its sister city and port Apollonia.

A few hundred kilometres to the south-west, near the town of Ajdabiya, the fighting was raging on the Eastern front line. In the Green Mountains however, all was cool breezes and tranquillity, the fragrant smell of pine heavy in the air. It felt like another world.

Unexploded bombs and rockets littered the fields so our hiking party stuck mainly to roads.

Cyrene, once known as the Athens of Africa, is perched on the edge of a cliff, with uninterrupted views out over the coastal plains to the sea. From the amphitheatre of Cyrene you can see the columns of the temples of Apollonia, 500 metres below and 20 kilometres away.

The view is magical, another one of those unexpected and somewhat surreal pleasures that comes from exploring places so far off the beaten track that you need to blaze your own trail just to get there.

We ambled around the vast site, clambering over fallen columns and taking the plunge in millennia-old stone pools still fed with crystal clear water from natural springs. And up above the city, set back in a pine forest we explored the goliath Temple of Zeus, bigger than the Parthenon in Athens.

Yet possibly the most memorable moments of my entire stay in Libya came in Misrata. This rebel-held enclave in the west of the country hit the headlines in Britain when it was besieged by forces loyal to Gaddafi.

I was posted there in 2011 when the fighting was raging uncomfortably close. The front lines were only 35km from the city centre and buildings were hit by rocket fire on a nightly basis.

It might not sound like the ideal spot to indulge in a bit of hiking, but once the front lines moved, a group of friends and I decided to brave it. We headed for Dafnia, the farming hinterland around Misrata’s coastal urban hub.

The front lines were only 35km from the city centre and buildings were hit by rocket fire on a nightly basis.

Unexploded bombs and rockets littered the fields, making it dangerous for farmers to harvest what was left of their crops, so our little hiking party stuck mainly to roads.

We were heading for the sea, where the turquoise waters, white sand and complete lack of people almost too good to be true after the stresses and strains of living in a warzone. It turned out it was too good to be true. Within 10 minutes of our arrival a car pulled up on the cliff overlooking the beach. A father and his two sons (neither of whom was over 12) got out.

But it wasn’t the boys that had attracted our attention – it was the AK47 the father was cradling in his arms. With nowhere to run, I had nightmare visions of being gunned down wearing nothing but my speedos. This wasn’t the way I’d thought I’d die.

I had nightmare visions of being gunned down wearing nothing but my speedos. This wasn’t the way I’d thought I’d die.

My heart was pounding as they walked down to the seafront. Surely he wouldn’t kill us in front of his sons?

In the end I needn’t have worried. They weren’t interested in a bunch of strange foreigners swimming at all and instead strolled straight past us and proceeded to engage in a peculiarly Libyan form of father-son bonding – squeezing off automatic rounds into the Mediterranean sea.

The noise up close was deafening, but my relief more than outweighed any discomfort it might have caused me. I couldn’t help wondering though, whatever happened to a good old kick-around in the park? 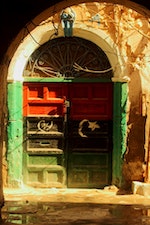 Afghanistan May Be Best Known as a Conflict Zone, but That Didn’t Stop These Mountain Bikers…