We caught up recently with Jimi Harrison to find out more about how he’s bringing people together in Manchester through running and walking. The club he founded during lockdown, Keep On Keeping On, is about getting people moving, and getting them outside, to help improve mental health.

Hey Jimi. What inspired you to set up Keep On Keeping On?

So, my own mental health took a bit of a decline during the second lockdown. I actually enjoyed the first lockdown but when the second one hit I had too much time on my hands to sit and reflect on a few traumatic experiences I’d been through. I’m definitely the kind of person who looks forward and not backwards, the concept of reflecting wasn’t any good for my head. During this time I started running around 30/40km a week which was incredibly good for clearing my head. I was hooked on the feeling it gave me instantly.

From there, I threw the idea of starting a running club around to some friends. It got a great response. The idea of bringing a group of people together to exercise, and enjoy a social pint together was a no brainer. I got the name Keep On Keeping On from a few of my favourite songs by Primal Scream and The Stone Roses. This also shortens to KOKO which is a catchy abbreviation. 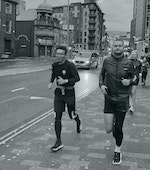 Is it aimed at a particular standard of runner, or is it for everyone?

All abilities are welcome to join our club. We take a nice steady pace and stick together for the whole run, and there are no prizes or kudos for being the fastest runner.

“All abilities are welcome to join our club”

What’s the vibe been like amongst those who have got involved? What’s the feedback been like from people?

The response has been very humbling. We have a fantastic bunch of runners who turn up every week, all from different backgrounds and various places around the UK (and Japan). The vibe is super friendly and the option of a pint at the end is a good way for everyone to chat and open up.

Keep On Rambling On is a fairly new thing I have set up. Again going back to struggling with mental health, I’ve been a keen outdoor enthusiast for years and not much beats trekking up a mountain and breathing in that fresh air. It’s a great way of recharging the mind and soul.

Living in Manchester we have some awesome walks within an hour and a half radius (Peak District, Lake District, Snowdonia). The first Ramble took place in September in the Peaks, a 12km walk starting in Castleton and summiting Mam Tor. We then walked along the Great Ridge and back into Castleton for some pub grub and a well deserved pint. In 2023, we will be holding a Keep On Rambling On event every quarter.

What are your plans for the group moving forward?

[We’ve got] big and exciting plans for next year. Our weekly social run continue every Tuesday at 6.30pm. We’ll get signed up to some running events in and around Manchester, and raise some money for Mental Health charities. Our merch is going to go up a level too. Working in the fashion industry I have some cool connections which will allow me to offer a great KOKO (@keeponkeepingonrc) range of products. There’s loads more exciting stuff to follow, and our Instagram page is where you’ll hear about it first.

What Goes Unsaid | A Film About Ultra-Running, Body Dysmorphia and Mental Health

Adventure
We use cookies on our website to give you the most relevant experience by remembering your preferences and repeat visits. By clicking “Accept All”, you consent to the use of ALL the cookies. However, you may visit "Cookie Settings" to provide a controlled consent.
Cookie SettingsAccept All
Manage consent