Brett Rheeder beat Martin Söderström into the top spot in the slopestyle, and Jared Graves got his win in the World Enduro Series after coming so close in 2013.

No need to worry if you didn’t catch the action though. We’ve rounded up some of the best bits to let you know why this year’s CFF was an awesome weekend…

Brett Rheeder Flippin’ Out In The Slopestyle 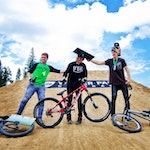 Brett Rheeder absolutely killed it in Colorado, nailing the first ever competition flip he’s gone for from a flat drop and taking the top spot as a consequence.

The Canadian was having a huge year in 2013 before a crash at Crankworx Les 2 Alpes ruled him out for the season, so it’s great to see him back to his best and sticking some massive runs.

Rheeder nailed his winning 93 score on his first run, including a massive corked 720 mid run to sweeten up the score. No pedal slips. No trouble in the landings. That was some video game riding right there.

It’s always sick to see the riders going as big as they can on their first run as well as their second, so full credit to Brett for going for it early. Watch out for him come Whistler next month!

The Rest Of The Podium Sticking Some Sick Tricks

Rheeder may have taken home the gold but the guys making up the rest of the podium stuck some absolutely massive runs as well.

Check out Martin Söderström’s second place effort in the video above – it’s pretty insane. The rider looked strong in his second run too, nailing a huge bar spin to tail whip before a pedal slip ended his hopes, but it’s clear to see that the Swede is well over his injury.

Boston’s Nicholi Rogatkin took third place, and was pretty close to climbing even higher. The 18-year-old has a massive bag of tricks, pulling out a couple of double tail whips, a front no hander and a HUGE signature cash roll out in what would be the last run of the day.

Nicholi was clearly disappointed with the judge’s verdict of 84, and with a few less bobbles and a bit more creativity coming in and out the bowl, he could well have taken the win.

In the FMB Slopestyle, freeriding veteran Greg Watts hit us with a massive run. Greg scored an 81 run that saw him take fourth with a sick backflip suicide to barspin and a huge backflip bar spin to finish. All with the usual Greg Watts style of course.

In round five of the World Enduro Series meanwhile, Mitch Ropelato was showing some serious skills in his first ever enduro event, taking two top fours in his first two stages and claiming a fourth, fifth and second place finish in the remaining stages as well.

Ropelato normally rides downhill, but he definitely impressed in his Enduro debut with a fourth placed finish overall.

Jared Graves came so close to winning in Colorado last year before a crash let Jerome Clementz steal the victory. 2014 was Graves turn to win.

The current leader of the World Enduro Series was back to claim the top spot this time around, although his Yeti teammate Richie Rude gave him a run for his money.

Rude won the first two stages before Graves took a clean sweep on Saturday to win all three stages, despite problems with his brake rotor early on in stage three.

The American rider took the stage six win as well, and even with a fourteenth place finish in the final stage – which was won by Richie – he still held his place.

Yeti have practising up in Colorado, so the altitude won’t have been effecting their team as much as other riders. It certainly showed and they dominated the leaderboard.

This Crash And Attempt To Remount Bike!!

Skip to 3:12 in this highlights video from our friends at Dirt TV to see an unfortunate rider try to save a bit of time in stage one of the enduro… It doesn’t go to well.

Is this new suit the most ridiculous piece of cycling gear yet?!

Is This The Strangest Mountain Bike Film Ever?

Back in the market for a new ride? Here's five things to watch out for when the salesmen get going...

The Course for This Colorado Slopestyle Comp Looks Sick!

Kelly McGarry and Tom Hey talk us through the slopestyle track the top riders will be hitting at the Colorado Freeride Festival FMB Gold event...

The Course for This Colorado Slopestyle Comp Looks Sick!

10 Mistakes That Every Racer Makes When They're Starting Out

Enduro World Series
We use cookies on our website to give you the most relevant experience by remembering your preferences and repeat visits. By clicking “Accept All”, you consent to the use of ALL the cookies. However, you may visit "Cookie Settings" to provide a controlled consent.
Cookie SettingsAccept All
Manage consent