We’ve teamed up with Nikon, who’ve just released the brand new KeyMission 360 Degree action camera, to create a series which focusses on the missions that drive those at the cutting edge of action sports. Here we review the KeyMission 360 and look at how this innovative technology could be a game changer in mountain bike filming.

Virtual reality, it is safe to say, is having something of a moment. The dream of a fully immersive experience has been around since the earliest days of computing. But recent developments – like the purchase of VR startup Oculus by tech titan Facebook – have helped put the idea firmly back in the spotlight in recent years. It’s not just headset designers who have been working on creating fully immersive experiences either.

“Imagine trains at a Fest Series event where everyone was wearing a 360 camera?”

In action sports, part of the reason portable action cameras have become so popular is they allow you to “ride with the rider”. So it’s no surprise that camera companies started looking at ways to make what is already an immersive experience even more so. 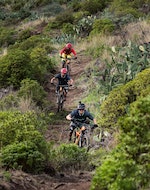 The latest development along this path comes from Nikon, who recently released the KeyMission 360. This portable action camera films 360 x 360 footage – essentially capturing everything that’s going on around the rider. Viewers looking at the footage can scroll around and watch whichever angle they like. It’s a properly immersive experience, putting you right at the heart of the action.

Having tested a KeyMission 360 recently on a trip to Madeira, the team at Mpora believe this clever little bit of tech could be a true game changer in mountain biking. Here’s why:

1) The Footage is Impressive

The footage straight off the KeyMission 360 looks great. The device is essentially two super-wide angle cameras mounted back to back, shooting simultaneously. The footage is then stitched together in camera, and can be viewed immediately using Nikon’s KeyMission 360/170 app, available either on your phone (obviously more useful when you’re out on the trails) or on your computer.

Each of the two lenses boasts a 20 megapixel 1/2.3inch CMOS sensor, with an aperture that can open to f/2.0, and an ISO which goes up to 1600, meaning it’s more than comfortable shooting in low light conditions. If you’re shooting stills, you can get up to 20 megapixel 360 degree photos. It will shoot up to 4K ultra high definition resolution video too. This puts it up there with the market-leading action cams out there. Timelapse and Superlapse options (the controls for which are adjustable via the app) are also available.

As you’d expect from a camera-maker with Nikon’s pedigree, this is solidly built and feels like it. It’s shockproof (you can drop it from a height of 2 metres and it will be fine) and waterproof to a depth of 30 metres – which is usually deeper than most recreational divers go – should you want to take it scuba diving.

There’s a standard tripod mount which fits on a range of Nikon produced mounts for helmets and handlebars to make filming yourself and your mates easier, and you won’t have to worry about coming off – this will take a beating and keep coming back for more. The buttons are very simple – there’s one button to switch it on and another to start and stop recording. Honestly, it couldn’t be easier. Nikon have also included an airplane mode in case you want to film without activating the WiFi and bluetooth. All the other controls (including switching between photo, video and timelapse modes) are controlled through the smartphone app. This is blessedly straightforward too, with simple control, viewing and editing options so you can cut and upload as you go.

Footage and photos are recorded on a standard micro-SD card and can be auto-synced to your phone. The battery lasts for around an hour of continuous 360 degree video shooting, or around 230 photos.

4) As a Rider It Opens Up Whole New Worlds

So that’s the practical and technical stuff out of the way, but what of the possibilities for mountain bikers? Well, if filming a run with a conventional action camera gives you a new perspective on it, this gives you about a million new perspectives. Want to see whether you really lost the rear end as you took that corner? Simply scroll round on the footage and look at it. Want to watch your feet to see what you were doing on the pedals? That’s easy too.

Best of all, if you’re doing a bit of follow-cam, you never have to worry about someone going out of the shot, regardless of how high they get in the air, or even if you overtake them. Simple keyframe plugins on common editing software means that even if you’re outputting a normal flat video (as opposed to a 360 one) you can track someone’s movements easily.

Our favourite use of the 360 camera was for group shots – filming a group of riders shredding together has never been easier. Get one of these mounted on your helmet, plonk yourself in the middle of a group of your mates and you’ll be able to see everyone and everything. And if your mate stacks it behind you? Don’t worry, you’ve still got it on camera! 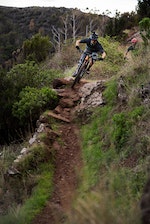 As fun as it was watching our crew ride trails, we couldn’t help but get excited about the idea of Nikon’s 360 technology spreading to the pros. Imagine trains at a Fest Series event where everyone was wearing one of these? If a regular action cam puts you in the driving seat (or rather, the riding seat) this adds a whole new dimension.

How rad would it be if at next year’s Rampage you could see footage of Graham Agassiz or Brandon Semenuk hitting a drop and scroll around to watch their rear wheel whip outwards as they leave the lip? Or look down at their bars to check out exactly what they’re doing with their brakes on a technical section?

The possibilities for portable 360 filming are truly incredible. Whether you’re training seriously, watching your favourite pros or just messing about with your friends, this kind of truly immersive film footage will only make it better. Here at Mpora, we’re seriously excited.

I Am On A Mission

Danny MacAskill is Back | ...And He's Taking On Mount Kilimanjaro in Africa

Watch the most famous trial cyclist in the world take on Kilimanjaro...

Danny MacAskill is Back | ...And He's Taking On Mount Kilimanjaro in Africa

Conclusive proof that Spain is heaven on earth for people who love action sports.

'Radical Times In Spain' Quiksilver Film Will Give Surfers, Skaters, And Snowboarders Wanderlust

No More Snow? | Climate Change Study Suggests End Of Skiing In The Alps By Year 2100

Alarming report by the Institute for Snow and Avalanche Research illustrates potential impact of global warming.

He's almost 100, but nothing stops this dude from doing what he loves.