We’ve teamed up with Jeep, who are celebrating their 75th anniversary this year, to shine a spotlight on some of the ultimate renegades from the world of action sports – past, present and future. As a Jeep Brand Ambassador, Dan is undoubtedly one of these – a rider who does things differently and follows his own path. In this exclusive interview he explains why, despite his many years at the top, his passion for all things mountain biking remains undimmed  – and how it still feels like an adventure every time he gets out on his beloved trails.

Spending your time digging – working endless hours with spades and rakes, covered in dirt when the sun shines and knee deep in mud when it’s raining – might not sound like everyone’s idea of a dream job. But professional mountain bike course designer, trail digger and Jeep Brand Ambassador Dan Atherton wouldn’t have it any other way.

Of course, as one of the best-respected designers in the business, not to mention a hugely talented mountain biker in his own right, Dan is operating at the pinnacle of the sport. It’s not like he’s doing all the hard graft by himself. But such is his passion for building the best jumps humanly possible, and the thoroughness of his approach, that he still personally puts in long hours with the shovel. For Dan though, the rewards make all the hard work worthwhile.

“Maybe it’s the feeling of freedom,” he says pondering what it is that he loves about digging trails so much. “The feeling of not being restrained by someone else’s parameters. You can choose the mountain you want to build on, build whatever you want and ride any time you want. You’re not reliant on anyone.

“It’s about the freedom to create something that’s in your head; the process of building something from scratch through sheer hard work. And then the feeling of riding it afterwards, knowing the time and effort that’s gone into making that possible.”

“Dan Atherton is a maverick, a man for whom the word “can’t” sounds like a challenge.”

To hear him talk is to realise that Dan Atherton isn’t a man with many restraints on his imagination. He’s a maverick, a man for whom the word “can’t” sounds like a challenge. He is also, of course, a man for whom mountain biking is a way of life.

Though he’s arguably better known for his trail digging than his riding these days Dan is, of course, the eldest sibling of the most famous family in mountain biking. Alongside his brother Gee and his sister Rachel, he started young pedalling the paths round their parents’ Welsh home before all three rose rapidly up the ranks before turning pro. The younger two race on the downhill world cup circuit where they’ve won several overall titles and multiple World Championships each. But despite having enjoyed an accomplished riding career of his own – with multiple four cross titles, plus impressive downhill and enduro results to his name – more recently Dan has chosen a different path.

These days he draws his inspiration not from the shouts of spectators or the rush of racing, but from the shape of the soil beneath his boots. His passion and precision as a digger is world-renowned. Whether it’s the infamous Red Bull Hardline course, a track in the Welsh countryside heralded as the “most difficult in the world” by many, or his ongoing projects in Dyfi forests, Dan has a distinctive outlook on trail building that makes others sit up and take note.

He explains: “When I build, I try to visualize myself in the situation of riding the trail and how I want it to feel on the bike. That usually comes out to be big, raw and quite clean cut.

“I don’t think I necessarily build bigger or harder than anyone else, but the difference is location – we’re in Wales, not British Columbia. The progression that’s going on in BC with riding and trail-building is definitely something I look at and aspire to.

“I don’t try to be different, I just like to do things properly and not cut corners. Once I start building there’s no job too big and nothing’s ever good enough – that usually results in something that’s quite unique!”

And is innovation the main motivation for all those days in the dirt?

“It’s the process of building a vision, but there are very few days when you enjoy the process. Every day is a struggle, especially in Wales with the rubbish weather. But we learnt very early on that the work you put in is directly linked to what you get out.

“[Innovation] and development are what keep mountain biking so unique. There’s a niche for every style of riding and every discipline. It’s something that has motivated me through my whole career – to keep pushing the next chapter of my riding, and now my building as well.”

“For me it’s always been about pushing the boundaries of our riding. For me, it’s about searching for that feeling you get the first time you ride something new…”

If there’s one man well placed to talk about the development of the mountain bike scene, it’s Dan. He’s been in the core of the community for years now – involved in so many different aspects and disciplines of the sport. This gives him a unique appreciation for mountain biking’s heritage, which is one of the reasons why the partnership between him and Jeep, a brand with rich heritage of their own, is so effective. The SUV manufacturers sponsor not only Dan, but the Trek Factory Racing Team that he continues to ride with on the Enduro World Series circuit.

Dan’s appreciation of mountain biking’s history also makes him uniquely placed to predict its future. So, what’s next for the sport? We couldn’t resist asking Dan to get out his crystal ball. “I think the next ten years will be an interesting time for the new generation of mountain bikers.

“We were talking about this not long ago, and Rach said something that I think is really true – when we first started the progression came from getting out in the forest, building your own tracks and riding something hard. But nowadays with the growth of bike parks it will be interesting to see if the UK maintains such a depth of talent. Developing riders are riding much more groomed, maintained bike park trails.

“On the other hand,” Dan continues, “there’s the argument that riding is more accessible now. The sport has advanced so much over the last ten years. The improvements in technology mean that riders can push harder than ever. But then the courses they ride sometimes haven’t replicated that progression.”

So what would the man who’s an expert in both riding and course building want to see next? “I’d like facilities like bike parks used not only for riding, but also [to create] a more mainstream pathway for riders to become professionals. [It would be] a way of reaching out to small communities around the world and educating them on how they can start racing at a local level, moving up to World Cup level and then pro level with everything that’s involved in between. For this we need facilities like pump tracks and skate parks in every small town, and more easily accessible bike parks.”

When you hear him talk animatedly about future possibilities like this, it’s obvious that despite many years at the top, Dan’s enthusiasm for all things biking remains undimmed. And whether it’s riding or trail digging his passion for progression is still the main motivating force.

“For me it’s always been about pushing the boundaries of our riding,” he concludes. “For me, it’s about searching for that feeling you get the first time you ride something new, and trying to replicate that feeling.” Like anyone else who gets up at daybreak to get out on two wheels, Dan simply can’t get enough.

It’s clear that no matter what’s next in the mainstream world of mountain biking, Dan is going to keep doing his thing, pursuing his singular vision of what mountain biking and trails could be. For anyone involved in mountain biking – in the UK and elsewhere – that can only be a good thing. 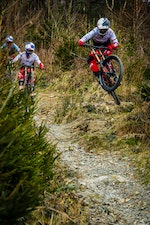 We’ve teamed up with Jeep, who are celebrating their 75th anniversary this year, to shine a spotlight on some of the ultimate renegades from the world of action sports – past, present and future. The series kicks off with mountain biking, as seen through the eyes of one of the scene’s best-respected riders and trail-builders, Dan Atherton. Next month we’ll shift our attention to surfing, asking big wave surf legend Andrew Cotton to pick out his ultimate renegades.

Klunkers | These Were the World's First Mountain Bikes, And the Men Who Rode Them

Shaun 'Napalm' Palmer | The Story of That Magazine Cover

I Did It My Way | The Darren Berrecloth Interview

inspiration Interview Jeep Ultimate Renegades Joy longform
We use cookies on our website to give you the most relevant experience by remembering your preferences and repeat visits. By clicking “Accept All”, you consent to the use of ALL the cookies. However, you may visit "Cookie Settings" to provide a controlled consent.
Cookie SettingsAccept All
Manage consent