In modern times, the Everest climbing scene has had more than a whiff of the Disney World about it. Heavily commercialised, and home to great big snaking queues, the mountain has, it’s fair to say, lost some of its mystery and aura.

100 years ago, things were very different. Mount Everest, and its surrounding area in the Himalayas, was – especially from a western perspective – much more of an unknown beast.

“To mark the centenary of the first Everest expedition, back in 1921, the Alpine Club is holding a landmark exhibition”

To mark the centenary of the first Everest expedition, back in 1921, the Alpine Club is holding a landmark exhibition featuring never-before-seen artefacts, photographs, diaries and art works from the 1921, 1922 and 1924 Everest expeditions.

‘Everest: By Those Who Were There’ uses the words of expedition members to explore their historic attempts to reach “the roof of the world.” It covers everything from the 1912 march across Tibet, when they went in search of the mountain’s precise locations, to the haunting disappearance of George Mallory and Andrew Irvine on their fateful summit bid of 1924.

The Alpine Club have kindly shared some of the exhibition photos with us. You can browse them below.

The porters and Sherpas who went to over 27,000ft, in June 1924, to establish and supply the high altitude camps that George Mallory and Sandy Irvine would use to make their attempt on the summit of Everest on 8 June. They are dressed in the wind-proof cotton smocks, woollen helmets, gloves, goggles, boots and puttees issued to them by the expedition (photo by Bentley Beetham).

Looking East From The North Col

The Seracs of the East Rongbuk Glacier

Another 1922 panorama (42 cm x 26.5 cm) showing the seracs (or ‘penitentes’) of the East Rongbuk Glacier, which had to be crossed to reach the North Col and the possible route to the summit of Everest.

Taken by Howard Somervell on the last day of the 1921 Reconnaissance expedition, showing Camp 2 at 19,000ft packing up for the return to the Rongbuk Glacier and the 200-mile march back to Darjeeling.

A panorama taken by TH Somervell at 28,000ft on Everest, looking west, shot with a vest-pocket Kodak camera at midday or early afternoon on 3 June 1924. This was the highest point on earth at which photographs had ever been taken.

Finch testing oxygen equipment in 1922. No other details are given but he did much to improve their working. Photographer unknown. 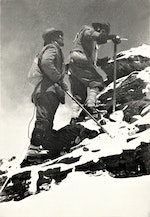 Mallory & Norton in their tweeds and soft hats, without oxygen, climbing at 27,000 ft. Taken on the first attempt at the summit of Everest, in May 1922, while nearing the highest point reached by the expedition. Photo by Howard Somervell. Map –  ‘Mount Everest Photographic Survey, “Everest” (centre sheet)’ survey of India 1922. The photo surveying by Oliver Wheeler was done by a new method pioneered by his father Arthur in Canada. Known as the Canadian photo-topographical method, it used a theodolite and a fixed focus camera.

Painting 1 – ‘Everest from Pang La, 45 miles away’, by Howard Somervell.

Painting 2 – ‘Seracs in the East Rongbuk Glacier 1922’, by Howard Somervell.

The exhibition will be held at the Alpine Club’s premises of 55 Charlotte Road, Shoreditch, EC2A 3QF and will be open to the public on Tuesdays and Wednesdays, 12:00 – 17:30, from 21 June until 17 October with a closure scheduled for the month of August.

To ensure that the venue remains COVID-compliant, and to avoid long waits, please book ahead of your visit by emailing [email protected]

Introducing The Mountain Huts Of Valais

Climbing Everest At Home | How Many Steps To Climb The World’s Highest Mountain?

Adventure Everest gallery
We use cookies on our website to give you the most relevant experience by remembering your preferences and repeat visits. By clicking “Accept All”, you consent to the use of ALL the cookies. However, you may visit "Cookie Settings" to provide a controlled consent.
Cookie SettingsAccept All
Manage consent