Life may be a journey for everyone, but some people’s life journeys are definitely more epic than others.

Here are the five most ground-breaking incredible journeys you’ve never heard of.

Thomas Stevens – The First Circumnavigation of the World by Bicycle

You might think of road cycling as a relatively modern obsession, but the first circumnavigation of the globe by bike happened as far back as 1886. Even more incredibly, the man who did it was riding a Penny Farthing.

Thomas Stevens, far from being a Victorian gentleman adventurer, was a working class lad who emigrated with his parents to the US in the 1870s. After working in mines and mills up and down the country (and being run out of town for crooked dealings at least once) Stevens bought himself a Chicago-made Penny Farthing and hit on the idea of cycling across the US.

Cycling some of the way on train tracks, he was apparently forced to hang off the edge of bridges with his bike to avoid oncoming trains. But by the time he’d completed the journey from Sacramento, California to Boston, Massachusetts, Stevens had become something of a celebrity, welcomed by the fledgling clubs of “Wheelmen” everywhere he went.

Outing, an outdoors magazine, paid for his passage across the Atlantic and he rode out of Liverpool on the next leg of his journey to cheers.

Even the inevitable rain, which started almost as soon as he left the city, couldn’t dampen his spirits. From there he crossed France, Germany and Eastern Europe to Turkey stopping to buy a new pistol and sew Turkish currency into his trousers as a security precaution – both of which served him well when bandits tried to rob him near Mount Ararat.

He was expelled from Afghanistan by the local rulers and had to turn back but finally made it to India which, he was pleased to note, was “excellent wheeling and free from bandits”. He cycled up through China and across Japan before finally catching a steamer back to California more than two and a half years after he left.

Rob Thomson’s incredible journey began by emulating Thomas Stevens’ – at least partially. The New Zealander began cycling across Asia to the UK from Japan when his contract finished.

Somewhere around Switzerland however, he decided to swap two wheels for four, initially as an experiment. “I’m definitely not a skateboarder,” he told Stuff.co.nz, “I only planned to trial skating 1500km from Switzerland to England to see if it was an efficient way to travel.”

Soon however he was hooked. And having worked as crew on a boat to the Caribbean, he then decided to skate his way across the US. He spent New Year’s Eve 2007 with bikers in Florida, telling the news site: “Think of the biggest rednecks you can imagine and it was these guys, but they were so nice.

“We spent the night around a bonfire, one of their neighbours played the fiddle and they were shooting each other with Roman Candle fireworks.”

Midway across the US he decided to speed things up a bit by flying to China, but then skated all the way across the country and through Kyrgyzstan (where he ate horse-penis salami!) and Uzbekistan in Central Asia before heading home.

The entire trip took 850 days and cost Thomson three decks, three sets of wheels and three pairs of shoes. But he’d travelled a total of 7,555 miles by board by the time he made it home. 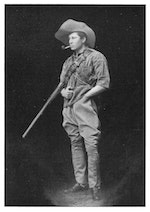 Ewart Grogan’s journey could have been the most romantic of the lot. Born into a wealthy family, he went to Winchester school and Cambridge but somehow succeeded in being expelled from both, leaving without a degree.

Of course in those days, failing at life didn’t disqualify you from ruling over vast swathes of the planet – as long as you were “a good sort of chap” and came from the right kind of family (ie. posh and British). So Grogan trotted off to Southern Africa where he helped oppress “the natives” during the Second Matabele War.

After that his life appeared to take a turn for the better. He’d fallen in love with Miss Gertrude Watt but her stepfather disapproved of the marriage. He decided he needed to do something impressive to prove himself worthy and set out to become the first man (or at least the first white man) to walk the length of Africa.

He set out from Cape Town at the age of 24 and arrived in Cairo two and a half years later having faced down lions, hippos, crocodiles, and malaria and been pursued by headhunters and cannibals.

His adventures made him something of a celebrity and he returned home to a hero’s welcome, meeting Queen Victoria herself and claiming Gertrude’s hand in marriage.

He then returned to Africa to take up where he’d left off oppressing the locals, narrowly avoiding a murder charge for beating one of his “rickshaw boys” to death in 1908. What a lovely bloke.

On August 27th 1912, passers by in Halifax, Nova Scotia might have been surprised to see a car with two occupants backing into the North Atlantic.

Thomas Wilby & Jack Haney weren’t mad, they just wanted to make sure their coast-to-coast crossing of Canada – the first ever by the new mode of transport – counted as the real deal.

They stooped to gather a flask of Atlantic sea water, shouted “all aboard to Vancouver” and they were off. Whether or not the crossing counts entirely as the real deal (the car travelled at least 900 miles of the 4,000 mile trip on a train) it was nonetheless impressive.

“They stooped to gather a flask of Atlantic sea water, shouted “all aboard to Vancouver” and they were off.”

Cars were still new and often unreliable and Canada, still basically a British colony at the time, only had 10 miles of paved roads. The scale of their achievement shouldn’t be dwarfed either by the fact that the pair, a British adventure journalist and a Canadian mechanic from the company that built the car apparently fought like cats and dogs the whole way across.

In his official write up of the trip Wilby studiously avoided all references to his travelling companion even airbrushing him out of photos.

However the pair blazed a trail that countless travellers have followed, through (as Wilby put it: “A panorama, unique, varied, rugged and consistently sublime”.

He may have started out more than 100 years after most of the adventurers on this list, but Yvan Bourgnon is no less intrepid than any of them – nor his journey any less epic.

Born in 1971, the Frenchman got into sailing as a youngster, embarking on a 4-year-long tour of the world with his parents at the age of just eight. His love of the sea – and of epic journeys – led him to set out in 2013 on possibly the most ambitious sailing trip ever attempted.

He would not only sail round the world solo (an amazing feat in itself) he would do so using no GPS or satellite navigation equipment, only the instruments that were available to likes of Magellan and Columbus.

“He may have started out more than 100 years after most of the adventurers on this list, but Yvan Bourgnon is no less intrepid than any of them…”

Most amazingly of all, he’d do it on a tiny dinghy of catamaran with no cabin – the kind that you can rent on hotel beaches around the world. His incredible journey saw him nearly drown multiple times, but he made it to a few miles off the coast of Sri Lanka when disaster struck.

Having spent days without sleep he nodded off in calm waters and woke up to find his boat breaking itself to pieces on the rocks. His tearful video footage of the event saw a huge outpouring of support and within months he’d acquired a new boat and set off where he left off.

Having successfully negotiated the pirate-infested waters off Somalia (he asked well-wishers and internet followers not to publicise his whereabouts while he was in the region) he made it back to France on 23rd June this year.

“The trip has disturbed my sprit and my body,” he told Red Bull France. “I have become more savage. More wild. When I came back to Paris, I was disorientated. I lost my bag, left my shoes in the restaurant, lost many things.” But, he says, it’s all made him realise he’s more comfortable out on the water and he’s already started planning his next adventure.

The Indestructibles, a new TV show sponsored by G-Shock, is coming soon to Dave.

The Indestructibles: All the Latest Action from the Groundbreaking New TV Show

Surfer Rides Monster Barrel Holding A Drone, Then Throws It Into The Air Like A Boss

Seriously, it wasn't just you...

article awe inspiration laughter surprise
We use cookies on our website to give you the most relevant experience by remembering your preferences and repeat visits. By clicking “Accept All”, you consent to the use of ALL the cookies. However, you may visit "Cookie Settings" to provide a controlled consent.
Cookie SettingsAccept All
Manage consent