Strava. There are problems with Strava. It used to be fun. Where did it all go so wrong?

There we were! Recording our rides, seeing how far we’d travelled, nodding at our statistical breakdown from a day on the roads/mountains. “Huh”, we’d say, or some similarly mundane noise signalling our mild intrigue, as we digested this information at the end of our ride before closing down Strava until we next hit the saddle. The wind was in our hair in those days. The sun was on our skin. It all started out so harmless.

Then the wars began. Strava decided to award people a KOM for getting the quickest time on any given segment. And segments are quite literally everywhere. This led people to start riding their bikes in order to try and get the fastest time on a segment instead of riding their bikes because they actually wanted to do so.

Or so it seemed for a lot of riders, anyway. And while the craze went as far to spread comfortably to the mountain bike trails, the KOM-hunters prime habitat will always be on tarmac and on the seat of a road bike.

Basically, some people get really annoyed when you “steal” their KOMs on Strava and replace them at the top of the table. And some particularly special people decide to make a whole lot of fuss about it as well.

This is certainly what happened when a rider named Scott Bradley took three KOMs from a rider called Brendan Edwards (who has now changed his Strava username to ‘. .’) on a 58.7km ride in Australia…

Brendan subsequently lost his shit, accusing Scott of having some sort of weird obsession with him and his KOMs, and subsequently, the thread below was born…

Highlights to watch out for in this section of the argument:

At this point, against all odds, a ‘Kent M’ jumps in to take Brendan’s side. Brendan’s side! The side of the human being ripping out his hair in front of his children because there is a faster person than him on a bicycle somewhere in his local area!

The lengthy comments then get flowing after that input. And again, there are some hidden gems in there.

Highlights to watch out for in this section of the argument:

AND. And and and. The magnum opus of Brendan’s future-award-winning tragic novella:

Cue violins. Cue heartbreaking montage. Cue slow increase of violins until you realise they’re playing ‘Requiem For a Dream’. Cue camera zooming slowly in on Brendan, as he drops to his knees, in the rain, under the dark, dark sky, and sobs deeply. 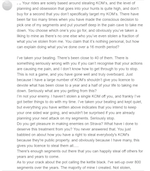 After that, the segment gained some more attention via Twitter and the thread opened up to the world, where Scott continued to answer questions, while also admitting that while he does not specifically target Brendan’s segments, he does target specific segments when he rides.

What we’re taking away from that, is that Brendan and Scott probably live near each other, and have probably come across each other in the real world before and not known it. Which is fantastic.

We’d highly recommend having a read of the thread. And when you’re done there, go for a ride on your bike. Don’t upload it to Strava. Watch on as the sky does not fall to the ground.

22 Signs That You’re Addicted To Strava

laughter surprise
We use cookies on our website to give you the most relevant experience by remembering your preferences and repeat visits. By clicking “Accept All”, you consent to the use of ALL the cookies. However, you may visit "Cookie Settings" to provide a controlled consent.
Cookie SettingsAccept All
Manage consent