Something wonderful is happening in a workshop in London each weekend. And we’re not just referring to our bedrooms as ‘workshops’ again.

No, we’re talking about the wonderfully named Bamboo Bicycle Club, a project set up by engineers James Marr and Ian McMillan that helps budding bikers build themselves a whole new ride out of – you guessed it – bamboo.

Now, to the untrained outsider, building a bike from bamboo might seem like a preposterous proposition; a concept created purely to spit in the face of mainstream society and go to environmental extremes to protect our beloved ozone layer.

“At first everyone thought we were nut. Even my parents were asking me ‘what are you doing?'”

This, however, is about as far from the truth as you can get.

To the knowledgeable insider – in this case James Marr – the process of constructing a bamboo bike is not only a chance to express and act upon a rare creative freedom, it’s also an entirely rational concept.

“At first everyone thought we were nuts,” admits James, who is the only full-time employee involved in the project. “Even my parents were asking me ‘what are you doing?’

“What we’re doing is really very logical though. Everyone is a bit sceptical at first, but if you look at the strength of bamboo, at composites, epoxies, at hemp and everything else, and you do the maths and look at the physics, it all makes complete sense.

“I wish people would think about it sometimes before making judgement,” he laughs. “A lot of modern composite bikes are built in a similar way to what we’re doing.”

One entry to the team’s online FAQs reads “Won’t a dog try and bite it?” to which the answer is, of course, a resounding no.

Certainly, some of the queries the club receive do seem rather ridiculous. One entry to the team’s online FAQs reads “Won’t a dog try and bite it?” to which the answer is, of course, a resounding no.

But what makes a bamboo bike worth the extra effort? Well, they’re lighter and stronger than much of the market for a start, and the dampening effects of the ride become apparent when we take one for a test spin around the local area.

Of course, any project involving bikes and such natural components is bound to be slapped with a big, fat eco sticker. For James though, the environmentally friendly nature of the project was just a welcome symptom of the process, with function and form coming first.

He explains: “Are they recyclable? They’re probably not that recyclable. Everyone tries to label us with a green card, but as engineers, our belief is that if something isn’t good, and not better than the product already on the market, why bother producing it?

“The fact that we build our own bikes makes it green in itself, but when we started that wasn’t our drive. The drive was looking at the bike performance and the ability to create our own. 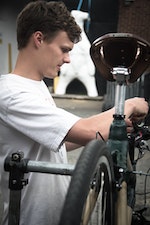 “It all started when I was living in the US and Canada and saw a bamboo bike over there,” he remembers. “When I was came back to the UK I was doing a murderous commute on an aluminium frame, so I thought about buying a carbon frame, then saw some bamboo frames online and thought ‘I’ll try one of these’.

“We started messing around building the bikes at weekends, and people started to ask if they could buy them. We told them no, because we were full-time engineers at the time, but that they could come and join our weekend building. That’s where the concept of the workshops came about. It’s a social event to get involved with.”

Certainly, the inclusion of the word ‘club’ in the title of the project is no mere coincidence – even if it does fit quite conveniently with the name of a certain similarly titled indie-rock four-piece.

The Bamboo Bicycle Club does not sell complete bikes. You can spend the weekend in the workshop building your own or buy a home-build kit and follow the instructions. The idea revolves around accessibility, learning, and avoiding the kind of salesmanship that could turn the project into a glorified call centre.

A blind man once approached us to build a frame. At first there were concerns, but really that was why we were doing this – to give people opportunities.

The attractive, welcoming ideology attracts all sorts of people along, and with the different people come an array of different ideas and interesting circumstances.

“A blind man once approached us saying that he had always wanted to build a steel frame but couldn’t because he was blind,” continued James. “Ian initially had concerns, but really, that was why we were doing this project – to give people opportunities.”

“He came in and it was really interesting teaching him and seeing how he addressed certain problems. Since then, we’ve been using some of the building methods that he used to teach people to feel when they’re building instead of just relying on their eyes.”

That’s the accessibility of the project proven then. And if anyone still has doubts about the strength of the bikes, the guys have also built a couple of bamboo mountain bikes – and have satisfied customers to vouch for their stability.

“For me, I would always want a steel frame when I’m mountain biking,” admits James. “I don’t think you’re going to feel the dampening effects of the bamboo frame when you’re hurling down a mountain, but people have approached us and I’ve said ‘if you really want to, we can do it’.

“It is a challenge but I’ve got videos of people bunny hoppying across the Spanish desert on them. They are definitely strong enough. We try not to say no to anything because it keeps us pushing the boundaries.”

It’s all about helping people build the bike that they can get the most use out of.

The co-founder continued: “Some bikes I see customers build and think – that’s great. I normally think of a bike for a few months before making it, thinking of what I need and want, and it’s very unlikely that other people are going to have the same core concept.

“It’s all about trying to identify what kind of bike will suit people and helping them build the bike that they can get the most use out of it.”

While the project is progressing nicely though, there are still an array of new ideas and possibilities that James is keen to kick on with – one of which the bike builder is particularly excited about.

He points to a slick looking ride downstairs (pictured above), and notes: “the frame I’ve come up with on this bike might not appear so, but it’s fairly revolutionary in the way bamboo frames are put together.”

The lug work we do could be preformed, which would mean you Wouldn’t need a jig for a kit and could put a bike together in two or three hours.

“The tubing is uniformed, and what I’ve done is split the bamboo and rejoined it. It’s a simple concept, but it allows me to predetermine the exact diameter of the tubing.”

“That means the lug work we do could be preformed, which would mean you wouldn’t need a jig for a kit and you could put a bike together in two or three hours. It also improves the aerodynamics of the frame considerably.” The rider remains very casual about his next steps – “there are also about ten other ideas that I’m working on as well “ – but while the building process and the people that run it seem very much relaxed, and the end goal is simply enjoyable riding, the project is very much one with serious appeal.

the 200 odd cyclists currently blasting round their home towns bearing the Bamboo Bicycle Club brand have given nothing but positive feedback.

The bamboo bikes ride beautifully; their sturdiness is demonstrated in the bikes that the co-founders have been riding for years, and the 200 odd cyclists who are currently blasting round their home towns bearing the Bamboo Bicycle Club brand have given nothing but positive feedback.

So, next time you’re looking for a new set of wheels, remember that carbon, steel or aluminium are not the only options – and they might not be the best ones either.

And, best of all, I even managed to get through this entire article without making a joke about pandas. Wait. Shit.

Can You Sue Mother Nature for Snowing Too Much? These Crazy Americans Are Trying…

What’s It Like To Surf In North Korea? Now You Can Find Out. No, Really…

Road rage is a serious, and often hilarious, issue in the cycling world...

Ryder Hesjedal was accused of cheating in the Vuelta a Espana - was he?

Road rage is a serious, and often hilarious, issue in the cycling world...

Ryder Hesjedal was accused of cheating in the Vuelta a Espana - was he?

Bikes somehow manage to be beautifully simple and ridiculously complex at the same time. The basic mechanism is very straightforward and has remained largely unchanged for...

Last week we put together a gallery of notes and letters from people that were really  angry their bikes got stolen. Anyway, while we were digging...

Are These The Worst Cycle Lanes Ever Built? Some Of These Are Ridiculous...

Near enough everyone who doesn't cycle hates the people that do. But it's not just our fellow road users that love to hate cyclists. No....

Are These The Worst Cycle Lanes Ever Built? Some Of These Are Ridiculous...