*196 quoted by the United Nations, Nick actually ran 211 to future proof the record

Sacking off your nine to five to travel the world is the kind of mindless thought that has probably crossed your mind at some point or other, especially in the bleak months of winter. You’ve probably though, even in your most mindless office moments, not considered running a marathon in every country before have you? For Nick Butter, it took a conversation in the depths of the Sahara, while participating in the infamous Marathon des Sables, to tip him over the edge.

Running alongside Kevin Webber – who’d been diagnosed with terminal prostate cancer and had been given two years to live – Nick couldn’t compute the man’s broad smile and positive mentality. Rather than blaming his ‘run a marathon in every single country on earth’ lightbulb moment of madness on severe dehydration, Kevin was to be Nick’s inspiration to live with more conviction. He made him realise just how precious life is.

“Nothing about this trip was neat and tidy, had I realised how long, difficult, terrifying at times and costly it would be, I honestly don’t think I would’ve started”

If you’re a Londoner, or any city-dweller for that matter, you’ve probably experienced itchy feet while contemplating your sedentary life spent behind a screen. Nick knows, as well as anyone, that it’s the ‘releases’ that get us through it all. “Running is a kind a of therapy,” he says. “I began running shorter distances for fitness, then I discovered how great it is for mental health and escaping the office.”

“My endurance was in my body from a young age, I was involved in sports growing up and I’d run or cycle to friends’ houses and school. I ran my first marathon when I was 11,” he tells me. “Eight years ago I started running more seriously and I had to turn down free race entries and sponsors. It just didn’t seem right. Meeting Kev gave me the impetus to do something amazing, which is when I found out that no-one had run a marathon in every country and thought it had to be done.

“I was a bit naive at the time because I had no idea how difficult would be. Nothing about this trip was neat and tidy, had I realised how long, difficult, terrifying at times and costly it would be, I honestly don’t think I would’ve started. Over 20 or 30 years it’s doable but squeezing it into two years was so difficult.”

I ask Nick about his drive for this incredible challenge: “The aim was to raise awareness and money for prostate cancer, so we could have a national screening program in the UK. Running a marathon in every country was a big enough story to catch the attention of the media. Kev was such an inspiration, he said ‘don’t wait for a diagnosis and do something you’re passionate about now’. I was passionate about photography, travel, meeting new people and running. What better way to travel the world?”

“I was mugged at gun point in Nigeria, bitten by a dog in Tunisia, endured lots of food poisoning and had kidney infection in Bangladesh”

Such a momentous journey, of course, requires a lot of time, money, and planning. Nick continues: “It was nearly five years from start to finish. The two years of planning were extremely intense, a lot of it was trying to find the funding. By the end of the trip, I had 48 sponsors but it wasn’t a lot of money. I relied heavily on savings, selling my house and car, friends and family. It cost an absolute fortune.

“In the middle of the trip we had a team of 19, including psychologists, security advisors, visa officers, and a social media assistant. By the end we couldn’t afford much, so we relied on the good faith and support of generous people. The logistics were a nightmare; I had nine passports, 120 visas – after being refused visas to Syria, Iran, Yemen and Libya. I thought I’d taken 220 flights, when actually there were over 450.” 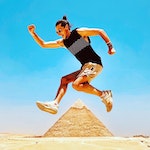 There was no time for cold feet (literally) as Nick’s first marathon in Toronto was run at -25℃. “Ukraine and Toronto were freezing, and my kit posed a lot of issues,” he says. “The running club in Toronto gave me gloves and hats, they were so kind.

“I think I prefer running in hot temperatures, although Africa and Asia were so hot and humid. In Kuwait it was 59℃, so I had to run at 3am.”

The Vatican City, the smallest country on Earth, is only 0.2sq/m and full of tourists. How did Nick tackle running 26.2 miles in a place like this?

“I needed an invite to run as there are so many tourists and it’s a holy place. I got up early, then several miles in security came out and stopped me,” says Nick. “I managed to talk my way around it as the officer was a sports fan. He made some calls and let me carry on. That was 82 laps, but not the most. In Syria I did 130 laps of a stadium and 335 around a car park in the Marshall Islands because of rabid dogs. The dogs in the Pacific are horrendous. I was given a stick from the hotel to ward them off.”

After visiting so many countries, I was intrigued to find out which cultures or customs stood out to Nick. “In Guyana, they gamble thousands of dollars – the equivalent of two years of rent – on finches. The birds go silent and the first to make a noise, wins,” he tells me. “In the Namibian desert I stayed with the San Bushmen and saw their simple, beautiful way of life. They catch all their food, eat around fires and don’t wear much clothing.”

“The amount of kindness I’ve experienced throughout the world is incredible. The media often shows the negative, but I’ve stayed with families, been driven to other countries and the next country too. People have given me water and money that they don’t have themselves. I have a catalogue of people that have been overly kind to me,” says Nick.

“I broke my ankle in Thailand”

Running back-to-back marathons and squeezing so much into such a short time, what was the routine like?

“It was mostly things I didn’t want to do like charging my phones and watches. Many places didn’t have a lot of electricity or plug sockets. If I only had 24 hours to do a run, I’d wake up early before it got too hot. I was pretty bad with my health; my body was so used to running I virtually didn’t stretch. In Europe the running was quite intensive, I did a lot of icing and elevating my legs about my heart,” he tells me.

I ask Nick whether he suffered from any illnesses or injuries along the way. “I broke my ankle in Thailand four months before I was due to leave and hadn’t run more than 13 miles before my first marathon,” he says. “I was mugged at gun point in Nigeria, bitten by a dog in Tunisia, endured lots of food poisoning and had kidney infection in Bangladesh. A trapped nerve in my Achilles proved a problem for a few runs, but that was the beauty of having the endurance in the tank, I just carried on and iced it after.”

Travelling through war-torn countries and areas high in crime, Nick had his fair share of hairy moments (including that gun point mugging in Nigeria): “Crossing the border from Oman into Yemen, my driver was trying to smuggle stuff into the country, and I was essentially his mule. I could’ve been locked up indefinitely. I was also shot at, at the border in Guinea-Bissau, by rebels. The scariest moments were mostly with the police and being detained.”

When he finally went through the finish line in Athens with Kev two years after he’d set out, Nick was understandably emotional.

“When we crossed the line, Kev was five years and four days since diagnosis despite being told he would only live for two. The chances of him being at the finish line were so slim, neither of us thought it was going to happen,” he tells me. “It was incredibly emotional, and a relief. Running with friends and finishing with Kev’s hand in mine after I’d promised him I’d do it was euphoric, scary, and sad because it was over.” 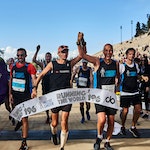 Hindsight, of course, is a wonderful thing. If he was to do it all over again, is there anything Nick would do differently?

“I’d take my time,” he admits, “raise more money, organise more people in advance and remove family members from the team. My dad booked all the flights, so it became really stressful for both of us. It mattered to him as much as it mattered to me.”

“A lot of people have the energy, but assume it’ll be painless. Once you get past the pain it’s euphoric, there are so many endorphins”

As my time talking to Nick comes to a close, I ask him what encouragement or advice he’d give people to looking to get into running, or aiming for their first race.

“A lot of people have the energy, but assume it’ll be painless,” he says. “Once you get past the pain it’s euphoric, there are so many endorphins and a great sense of satisfaction. My tip is to run every day for a month, when you get into the routine of running more it’ll come naturally.”

Following on from a such a huge project, what’s next for him?

“I’m doing a speaking tour in schools and theatres, then my book and documentary are coming out,” he says. “I want to run the length of Malawi in November, which is 30 miles a day for 20 days. After that, I’m going to try and break the circumnavigation record around Iceland with a friend.”

Hokkaido Heaven | How a "Bad" Winter Proves It's The Best

Despite lower than average snow depth, our Hokkaido ski trip was still one for the ages

This is one seriously steep ski descent

While Tirol boasts some of the best ski resorts in the Alps, there's also plenty on offer for those into their backcountry skiing and snowboarding

Q & A with Scott Mellin | How The North Face Stay Core

From the Arctic to the Antarctic, Lucia Griggi shares the stories behind her favourite shots

Swapping Planes For Trains | From Scotland To Austria

Anxious about the climate emergency one writer decided to take the longer, more eco-friendly, way round for his ski trip