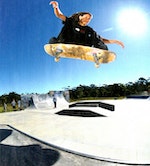 I remember playing Tony Hawk Pro Skater and there only being one female character to choose from. She was Elissa Steamer.

Back in the early 90s, Elissa smashed through a predominantly male-dominated scene with her part in Toy Machine’s 1996 video, Welcome To Hell. There were other female riders around, but Elissa was the first female skater to be shown as equal to her male counterparts.

However it wasn’t until 1998 when she won the Slam City Jam women’s division – and finally went pro – that she began to make a name for herself worldwide with her individual, dope style.

Need proof? Just check out her part in Jump Off A Building!

How Skateboarding Can Make You a Better Surfer

Just because there are no waves doesn't mean you can't surf

How Skateboarding Can Make You a Better Surfer

Because one sport just isn't enough for some professionals

Cara-Beth Burnside Elissa Steamer Hillary Thompson Lucy Adams Lyn-Z Adams Hawkins Patti McGee Peggy Oki Skateboarding Vanessa Torres Women
We use cookies on our website to give you the most relevant experience by remembering your preferences and repeat visits. By clicking “Accept All”, you consent to the use of ALL the cookies. However, you may visit "Cookie Settings" to provide a controlled consent.
Cookie SettingsAccept All
Manage consent