We’ve teamed up with Nikon, who’ve just released the brand new KeyMission 360 Degree action camera, to create a series which focusses on the missions that drive those at the cutting edge of action sports. Here we review the KeyMission 360 and look at how this innovative technology could be a game changer in skateboard filming.

It’s always the conundrum when you roll into a new town and you’re searching for spots to skate – Google can only tell you so much. There might be a ton of shots from a spot, but the chances are a lot of them will be cropped close in on the action. Even video footage will only tell you so much.

Unless it’s a crazily famous spot that’s been shot from every conceivable angle, it’s not always easy to get a proper sense of what the run up or run out is like. Or whether the surface is smooth enough to roll on without 88a softies. Or if there are obstacles blocking landing spots.

“Wouldn’t it be great if there was a tool that would give you a proper, all-around view? A camera that could almost give you a virtual tour? Well, there is.”

Wouldn’t it be great if there was a tool that would give you a proper, all-around view? A camera that could almost give you a virtual tour, where you could choose what to focus on and where to look at any given moment? Well, there is.

Introducing the Nikon KeyMission 360, a portable action cam that’s at the forefront of the brave new world of 360 degree filming – a field which is opening up new ways of looking not only at skate spots, but at skateboarding itself. Having tried one out, we think devices like these could kickstart something of a revolution in skateboard filming. Here’s why: 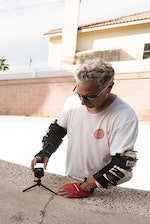 As we’ve already mentioned, 360 footage from a street spot or a skatepark gives you a unique perspective. You can scroll down as someone’s rolling up to a feature to see what the surface of the run in looks like. You can swing it round as the skater’s rolling away from a trick to get a better idea of how the landing looks. And if you plant a KeyMission 360 in the middle of a bowl (as we did with skateboarding legend Steve Alba in California recently) you get a whole new perspective on what the transitions are like.

Ben Powell, editor of Sidewalk skateboard magazine, suggested it would also be great for exploring massive skateparks: “There’s this tendency these days for building epically-scaled parks, like the huge one in Denver, Colorado, the Péitruss skatepark in Luxembourg, or even closer to home with a park like Saughton in Edinburgh. Cameras like this have a lot of potential for showing you what these places are really like, and giving you a true sense of the scale.”

As a tool for learning new tricks, the KeyMission 360 is great – the “how to” videos you could produce with this would be hard to beat. If you’re wearing one on a helmet mount, you can scroll around on the footage to look down and see what your board is doing and what the best foot placement positions are for each trick.

Alternatively, if you wanted to get a close up on the movements you needed for a nollie heelflip for example, you could mount one somewhere near the middle of the board (you’d have to be careful not to obstruct your feet) and then watch each foot in turn.

3) It’s Built Tough And Is Super Easy To Use

The KeyMission 360 is built to take a beating – the case is shock-resistant and you can drop it from two metres up without damaging it at all. It’s also waterproof.

The controls on the camera are completely idiot-proof – there’s one button to switch it on, and one to start filming – and although parameters like the frame rate and exposure compensation can be adjusted using the Nikon app, the auto-exposure settings are good enough that you’ll rarely need to.

4) It Gives You a New Perspective on Speed And Scale

“In the States especially, mega-ramp skating is becoming really popular with kids,” says Sidewalk’s Ben Powell. “You’ve got people like Bob Burnquist who are massively popular, and then they have the megaramp at X Games, and there are places like Woodward [pictured above] where kids can try it themselves.”

Cameras like the KeyMission 360, he reckons, will give you a whole new sense of the size and scale of these ramps. This would be good not just for kids who are learning to ride them but also for the “wow” factor of the resulting videos.

The same goes for speed. Imagine watching someone bomb a hill on a longboard and being able to scroll down and look at their wheels skidding round the corners. Or simply scrolling to the side and watching the scenery flying past at 50mph. It would put you right in the driver’s seat, giving you a scarily different perspective. Talking of bombing hills, imagine the shots you could get of you and your crew all ripping down a hill together, powersliding as you go. The KeyMission 360 is effectively two action cams mounted back to back, and the two massively wide lenses on either side mean you never have to worry about keeping someone in the shot again.

Similarly, if you mounted one of these in the bottom of a bowl and got everyone shredding round it, you’d get the sickest group shots. All in all, we’re pretty excited about this new bit of kit. And as cameras like the KeyMission 360 become ever more popular, we’re looking forward to seeing what creative uses skate filmers put them to.

Action Sports I Am On A Mission