After what was an epic first day of qualifiers yesterday at Simple Session 14 it was hard to contemplate how finals day would go up another notch, but it did, comfortably. With a packed arena in Tallinn, Estonia, by the time the Skate finals came around and a frothing online audience it once again lived up to the billing as one of the best celebrations of Skate and BMX in the world.

After everyone raising their games in the semi final heats, the final was almost too close to call with every skater seemingly stepping up their performance level as the two runs went down. In the end it came down to two final runs from Greg Lutzka from the USA and Phil Zwijsen from Belgium, they both nailed scores of 266 and topped the leader board. It was Lutzka (above) though who took the overall victory with a higher scoring first run.

In the DC best trick contest which ran straight after the final, Max Kruglov from Russia took the win  (hard flip backside over crook). If the level of skating wasn’t high enough for you, then the BMX’ers ratcheted it up another gear as their final heats took to the Arena after the Skate prize giving.

Mexico’s Kevin Peraza was looking good for a repeat of his 2013 win qualifying with room to spare over the rest of the field in the prelims. He couldn’t keep it up though in his final runs and finished down the rankings. Garrett Reynolds from the USA was looking like he was going to string together a pretty sick run but just fell short finishing fourth on 415 just a point behind compatriot Pat Casey. Australian Logan Martin laid down a solid 423 and was looking pretty good until Canada’s Drew Bezanson scored 445 to take the top spot.  Not suprising really seeing how relaxed he was before that last run.

That wrapped things up for Simple Session 14, role on 15, now to the after party. 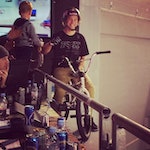 Tony Hawks Test Driving Back to the Future Hover Boards