Rob Dyrdek is probably the most powerful man in street skateboarding, and certainly one of the most famous. But having built a business empire in a proudly anti-corporate sport, he’s also no stranger to controversy. Hannah Bailey met him at his office in LA to find out about the making of skateboarding’s Million Dollar Man.

‘The world would probably tell you that having the world’s largest skateboard and a tennis ball gun and a foam pit and the first indoor concrete skate plaza with a giant zip tie and a bridge hanging off a tree would be pretty amazing. But to me I’m just so used to it, I have become numb to it.”

Rob Dyrdek is talking to us from across the desk of his office in downtown LA, and as impressed as we are by the tennis ball gun, the foam pit and the giant skateboard, he’s not lying. This really is just another day for the multi-millionaire skateboarder, entrepreneur, founder of street league and MTV star.

This year’s Street League was sponsored by Nike, featured on Fox Sports and offered a prize purse of more than $1 million"

“My problem is, the moment I decide to do something, I do it at all costs. A gift and a curse,”

One of the main reasons for this is the office where we’re sat, the headquarters of Dyrdek Enterprises in East LA. It’s here that Fantasy Factory, his hugely successful MTV reality show is filmed. It focuses on Rob’s life, with this incredible skatepark/office/boys-own-fantasy playground as its central location of the show.

We’d found the entrance to the factory strangely unassuming; you’d never predict that one of the world’s most amazing offices lies behind the plain wood paneled door. It’s the real world after all, and some things are surely just made for the cameras? Once you’re inside, the vast skatepark space is exactly how you would imagine, it seems the camera doesn’t lie about some things.

On the day we visit there are only a few people working, cornered in offices dealing with real business. But, we’re told, had we come a day earlier Ken Block would have been in with some of his crew and a week or two before Justin Bieber came by for a skate. This is the kind of company Dyrdek keeps.

So how did he get here? Well, it hasn’t always been easy rolling. “My problem is, the moment I decide to do something, I do it at all costs. A gift and a curse,” he says. His million and one ventures have rewarded him with a net worth of $15 million, but he had to learn business as he went and not all his projects were as success.

There was the attempt to start his own hip-hop record label, or the unfortunate flop of a skate feature film, Street Dreams, which he produced and financed himself and lost millions of dollars doing so. But if his “I just wanted to make something and went for it” confidence has resulted in him losing money occasionally it’s also made him who he is today. For every failure, this serial entrepreneur has had countless successes as a businessman.

"The world would probably tell you that having the first indoor concrete skate plaza be pretty amazing ... I have become numb to it"

Of course he’s still a skateboarder, but Rob Dyrdek began to look beyond the boundaries of the skate park long ago.

Growing up in Kettering, Ohio, his early story is not one of a troubled youth from the ghetto, but one of a relatively normal upbringing in suburbia. Dyrdek had other plans before he found his true calling: “I think ultimately I wanted to be a ninja,” he states. But it wasn’t long before he took up skating, aged 11, inspired by his studded-belt wearing sister’s boyfriend. His rise was ridiculously rapid. As he puts it: “I quickly discovered I had a natural gift for skateboarding, instantly got sponsored and the rest is history”.

He took the chance to move to the sunny state of California when Alien Workshop, his first and longest-running board sponsor, offered him a thousand dollar a month paycheck. That was big money to the then 16-year-old. “At the time I’d make $500 once month, $200 one month and one month I sold one board and got a cheque for $2” he explains. “Being guaranteed that thousand was a pretty big deal.” 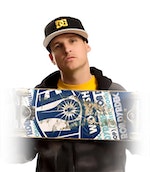 Soon Dyrdek was learning more than just skateboard tricks, as his hunger and desire to progress and learn transferred over to business deals too.

By 18 he was ready for his first entrepreneurial venture: Orion trucks. “It was the first time I toe dipped into the skate business world,” he says. As first moves go, it was a big one. He name-drops legends that were involved with Orion; Eric Koston, Tom Penny, Guy Mariano and Geoff Rowley. Dyrdek not only knows his stuff, but he knows the people. Rule number one on the road to success, always surround yourself with good people.

Its something that Dyrdek has always been careful about. As well as other skaters he’s had allies in brands such as Alien, DC and later MTV. “DC means a lot to me, it’s far beyond a traditional partnership that anyone could possibly have with a brand” he explains. “[We’ve had] 20 years of signature shoes, we did the first skate plaza together. They eventually helped me launch Street League.”

Of all his business ventures, he says, “that’s probably the one I am most proud of. I think when I decided to do Street League it was born from the idea it had never been done, and all these giant media corporations were the people dictating how professional skateboarding was presented to the mainstream. It was more the idea that it needed to be done right and I was the only guy who could do it.”

That might sound arrogant when it’s put down on paper, but it’s hard to argue with the success of what he’s created in the real world. In its four short years in existence, the series has transformed competitive street skating from a core concern into mainstream entertainment. This has enabled the most talented young street skaters to earn a living from the sport on a scale that was previously unimaginable. This year’s series was sponsored by Nike, featured on Fox Sports and offered a prize purse of more than $1 million.

“I discovered I had a natural gift for skateboarding, instantly got sponsored and the rest is history”

But even Street League’s stratospheric profile pales in comparison with the mega-fame MTV brings. In 2006 Dyrdek went from pro skater to household name overnight thanks to his idea and concept for the “buddy comedy about a skater and his big homie” that became his first show, Rob and Big.

In terms of exposure, skating and MTV aren’t “even in the same stratosphere” he says. “Skateboarding is niche notoriety and being on MTV is straight pop culture, relevant, mainstream star. Especially when you get into doing 8 years and over 250 episodes.”

Fantasy Factory, the follow up to Rob and Big that started in 2009, is still going strong. In fact, Rob reveals, he signed a mega-deal with MTV the same day we meet him in LA and again he’s kept his business head screwed on. He is one of only two people who own the integration rights to a show on cable, the other person being Jon Stewart of The Daily Show fame.

Like the CEO he is, he sees Fantasy Factory as a platform “to showcase business”. It’s the perfect way for Dyrdek to advertise his brands, the biggest and most important of all being himself. So what’s it like to live with the fame that MTV has brought him? “It’s fun to a degree but I never overly enjoyed it or let it bother me either,” he claims. He does however admit that it’s been useful. “Fame opened up a lot of doors and gave me a lot of opportunities to continue to scale that creativity and get things I wanted to get done easier at times.”

"Skateboarding is a difficult place to be a million dollar man"

There are of course, those in skateboarding who think that what Dyrdek has done with the doors that are open to him isn’t all positive. As with all people in the spotlight, he has lovers and he has haters. The commercialized behemoth that is Street League for example has its fair share of critics.

And moves like selling the popular Alien Workshop brand to a company that closed it shortly afterwards earned him online hate. And of course, even appearing on MTV in the first place is a controversial move as far as some skaters are concerned.

In short, the world of skateboarding – and street skateboarding especially – is a difficult place to be a million dollar man. But the newly turned 40-year-old says he’s comfortable in the decisions he makes, despite the haters.

He points out the amount of time and money he spends giving back to skateboarding. There’s his charitable foundation, which has built 13 skateparks throughout America since it was started in 2003 and of course there’s Street League, which he sees as a platform for pushing street skating and helping its young stars get the recognition they deserve for their talents.

This in fact is something he’d like to take further, saying: “There is no better way to help elevate these amazing athletes than to put them on the highest level which is the Olympic level.” Is taking skateboarding to the Olympics something you have plans to do, I ask? To which he says simply: “Yes”.

The most powerful man in skateboarding

It’s another plan that’s classic Dyrdek. Bold. Confident. Uncompromising and businesslike. It will undoubtedly be controversial to some, but when you look at the nearly 30 years of experience Rob has as a pro, who’s to say he doesn’t know what’s best for skaters and skateboarding?

Anyway, with support from Tony Hawk amongst others, skateboarding in the Olympics is increasingly looking inevitable. Plus when you look at everything Rob Dyrdek has done so far, you’d be stupid to bet against him achieving anything once he’s set his mind to it.

On that note, he’s off. It’s shades on and time to head to his next meeting elsewhere in LA, while we’re told to stay as long as we want, absorb the atmosphere in the office and have a jump in the foam pit.

The big blue gate slams behind us as we leave the Dyrdek Enterprises building covered in foam, but also inspired by what we’ve seen. Whatever some people might say about Dyrdek, you can’t help but be impressed by what he’s achieved.

As we walk the sidewalk home, a car pulls up beside us: “Is Rob in?” a desperate mum asks as her two sons sit in the backseat with autograph books gripped. We break the bad news, “sorry, he’s gone for the day”. She sighs and they drive off but they’ll be back tomorrow, as will Dyrdek for another day at the Fantasy Factory, turning his dreams into reality.