There are two particular segments in Days Of My Youth that sum up the new Matchstick Productions film pretty damn well.

The first is the resort part filmed in Crested Butte and Snowbird, on and around the regular pistes and over the pre-laid tracks of mere mortals like you and me. It’s not everyday you see that in a ski film.

The second sees Cody Townsend, Rich Permin and Markus Eder shredding some supernatural straight-lines in Alaska – and admitting their pretty freakin’ scared in the seconds before they do it. It’s not everyday you see that in a ski film either. 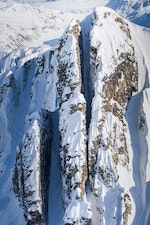 That’s the thing about Days Of My Youth; it’s accessible. Whether the crew are taking on jaw-dropping couloirs (pictured above) or goofing around in style, the whole thing is made a hell of a lot more relatable than your average hour of hammers.

We love a big mountain line just as much as the next snow addict of course, but some times it’s nice to see the pros kicking about and killing it in on the regular slopes as well.

Despite the resort part ultimately proving one of the most popular though, Cody, Rich and Markus admit they were far from confident about the success of the section before they saw the final product.

“I would never have thought about that segment before the film,” admits Italian rider Markus. “I would’ve been like ‘how can that be good? Everyone goes to ski areas’, but it turned out so well.

“There’s a few cool things in the segment that are super hard, but the rest of it a lot of people can do. It lets people compare.”

It certainly does show the guys in a more relatable setting, but we wouldn’t be too quick to compare your riding skills to theirs unless you want a tearful night of James Blunt and ice cream.

Rich Permin continued: “I was in the same place [as Markus]. I wasn’t into the segment and I was thinking ‘this is going to be shit’, but by the end it was one of my favourites for sure!

“Obviously we don’t want to look like shit riding, and we’re used to doing big things, riding huge lines and going bigger and bigger. So dropping maybe two metres on the knuckle next to the slope made us think ‘this might not look so good’. In the end though it did!”

For Cody and Scott Gaffney though, the man behind the camera, the section had been the result of years of pushing and wearing down the guys at MSP.

“Gaffney and I had talked about that segment four years ago, but when we pitched it to matchstick, even they were like ‘there’s no way that’s going to work!’” recalled the American rider.

“In the next two or three years we pitched it again, and it was the same even for this movie – the reaction was always: ‘I don’t know… we’ll see’.

“Gaffney was pushing super hard and even [MSP founder] Steve Winter was like ‘I don’t know how it’s going to turn out’, because it was such a big question mark. How could skiing on piste at the ski resort look good in a ski movie? But it did!”

Of course, the other segments in the film aren’t quite so relatable as this one, but that’s where the intimate nature of the filming and the continuous narrative jump in.

The narration is short and sweet but it ties together the segments and gives each of them a theme – some cheesier than others – that let the audience stay in touch.

“It’s not just our lives but how it relates to everyone’s lives,” said Cody. “Not just the people who enjoy skiing but who enjoy outdoor sports in general.”

He’s not wrong on that front. There’s one segment featuring James Heim where there’s no skiing at all, just climbing and mountaineering. The regular template was well and truly chucked by Gaffney when he opted for that angle.

Markus continued: “A lot of ski movies in the past were just action without any kind of story behind it. I think this one shows different aspects of us skiers. Many people ask ‘are you guys afraid when you do it?’ and the answer is obviously yes, but you usually wouldn’t get to see that in a movie.”

“When you do get that in the movies,” added Cody, “often it’ll be through interviews in the film looking back on what’s been done.

“Because we were mic’d up the whole time for this, you get the audio from the field, so you get to feel all the emotions we did. You hear us saying ‘holy shit, this is gnarly’ at the time instead of looking back at it later.”

This is the factor that makes the trio’s segment in Alaska so awesome. One of the climactic moments sees Cody straight-line a colossal couloir in what makes for the film’s iconic shot.

At the bottom he screams; “that was the scariest thing I’ve ever done”, and it’s a lot easier to believe him than if he was saying the same from an armchair three weeks later.

“We were shouting ‘Fuck, it’s bluebird’ instead of getting all excited… There was a lot of anxiety”

“That line in general had been a thought of mine for years,” recalls Cody. “It’s really hard to find a couloir like that. They pretty much don’t exist.

“I wasn’t actually that scared up the top but it became the scariest line when I was in it. I realised how gnarly it was, how skinny it was, how fast I was going. That was the first time in my life that a line has actually got scarier after I’ve dropped in. “This movie just captured what we normally do though. Going out, skiing lines and capturing more of the reality of how much fun it is and how big the challenges are.”

Markus was keen to continue on the topic: “We didn’t actually know how that segment was going to be put together either. Scott [Gaffney] was just shooting all the time, so there were so many shots in the film where we didn’t even know he was filming.”

The fact that the past two seasons have been poor for snow didn’t help either. It meant that the pressure was on big time when the conditions did allow the riders to film.

Cody said: “The snow was so bad some times that we would be riding some of the gnarlier lines having not skied in a month. I remember being on top of lines we had had to back off three times because of bad conditions, and then dropping in even though we knew the snow was still bad.

“Admitting on camera that it’s bluebird and instead of shouting ‘yeah we’re going skiing’, we’re saying ‘fuck, its bluebird’ is a bit weird. Obviously we’ve been waiting for a riding day but even though it’s everything we wanted, there’s a lot of anxiety about it.”

Despite the poor snow over the two years of filming though, and largely because of the less templated style of the film, MSP and Red Bull Media House have managed to produce quite the banger with Days Of My Youth.

The resort segment will no doubt pick up a bit of a cult following, and when you edit it in along with those straight-line hammers, outdoor sections and classic MSP humour, it makes for a top watch.

This could well become a regular viewing for those about to take off to the mountains. The film ticks all the boxes, and it definitely makes you want to click in and get back on the snow.

This ski edit is so creative, it makes normal tricks look lame…

Is This The Most Insane Ski Line Of The Year?

Is This The Most Insane Ski Line Of The Year?